KBJ Has IT Factor for Supreme Court 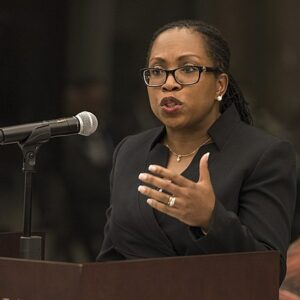 The Sisterhood helped Ketanji Brown Jackson navigate her way at Harvard. Next up, if she can survive the Senate confirmation hearings for a seat on the Supreme Court, Jackson will be home free.

Errin Haines, editor-at-large at 19th News — a publication that focuses on issues involving women, the LGBTQ community and people of color — wrote a brilliant account of The Sisterhood and Jackson.

The Sisterhood were Antoinette Coakley, Lisa Fairfax, Nina Simmons and Jackson. They met early on as undergraduates at Harvard, and later became roommates in the 1990s.

Fairfax, Haines wrote, was considering saying goodbye to Harvard as an undergraduate, but Jackson welcomed her to a study group of mostly black women.

Afterward, they all graduated from Harvard in 1992 and then were accepted to Harvard Law School, a rare accomplishment for any black student, let alone four women in the same class, Haines wrote.

They are still working in law: Coakley as a professor at Northeastern, Fairfax as a professor at Penn and Simmons as senior counsel for a private firm in New Jersey. Jackson currently serves on the D.C. Circuit of U.S. Court of Appeals.

Jackson, Coakley, Fairfax and Simmons have been in one another’s weddings and on hand for the births of children, Haines wrote. In 30 years, they have supported one another personally and professionally through successes and setbacks. And they describe Jackson as focused, thoughtful and boldly assertive.

That’s despite the detractors and liars. Tucker Carlson, Fox talk-show host, for one, already has commented that Judge Jackson would be better off in East Africa’s Rwanda than the star-spangled United States.

Yes, naysayers’ cruelty is on the map.

But the pro-KBJ commercials have already begun, with airtime by the DemandJustice organization displaying bipartisan support for her, including a voiceover by former Republican speaker of the House Paul Ryan hailing her qualifications.

Jackson was always the most obvious — and safe —  lifetime choice for President Biden. Remember, she served as a clerk to Justice Stephen Breyer, whom Jackson is slated to replace. Her background in criminal defense and public interest law made her a favorite among Democrats, according to Politico. Indeed, she’d be the first public defender to serve on the court.

She also has issued opinions on former President Donald Trump by rejecting his views, first in Trump’s claims for citing executive privilege into his dealings with Ukraine and, second,  the D.C. Circuit decision denying Trump’s efforts to block White House records from the Jan. 6 riots.

Jackson received three Republican votes during her confirmation for the D.C. Circuit Court of Appeals, including a “yes” vote from Graham. Childs also would have helped break the Ivy League stranglehold on the Supreme Court, having attended law school at the University of South Carolina.

Incidentally, if Jackson is confirmed on a party-line vote, Democrats would celebrate the first woman of color to serve as vice president, as Kamala Harris would cast the tie-breaking vote in the Senate for the first black woman justice.

Historically speaking, Robert Cottrol, a law professor at George Washington University, said, “Before 1967 and Thurgood Marshall, every president chose a White man for the Supreme Court. And before 1916, everybody nominated was a White man who was a Christian. Until Louis Brandeis, a Jewish nominee, was picked by Woodrow Wilson.’’

Ketanji Brown Jackson was The Sisterhood’s de facto program leader. She let it be known that her place in society at that time was Harvard — unapologetically. She wasn’t just occupying space in the Ivory Tower.

As Coakley recalled, “I remember clear as day, saying, ‘You are going to be the first Black woman justice on the Supreme Court, if there’s ever going to be one.’ I told her that in college! I could see it. She has it. She has everything that you would need to do that and represent us the absolute best.”

Ketanji Brown Jackson (or KBJ) has that IT factor.