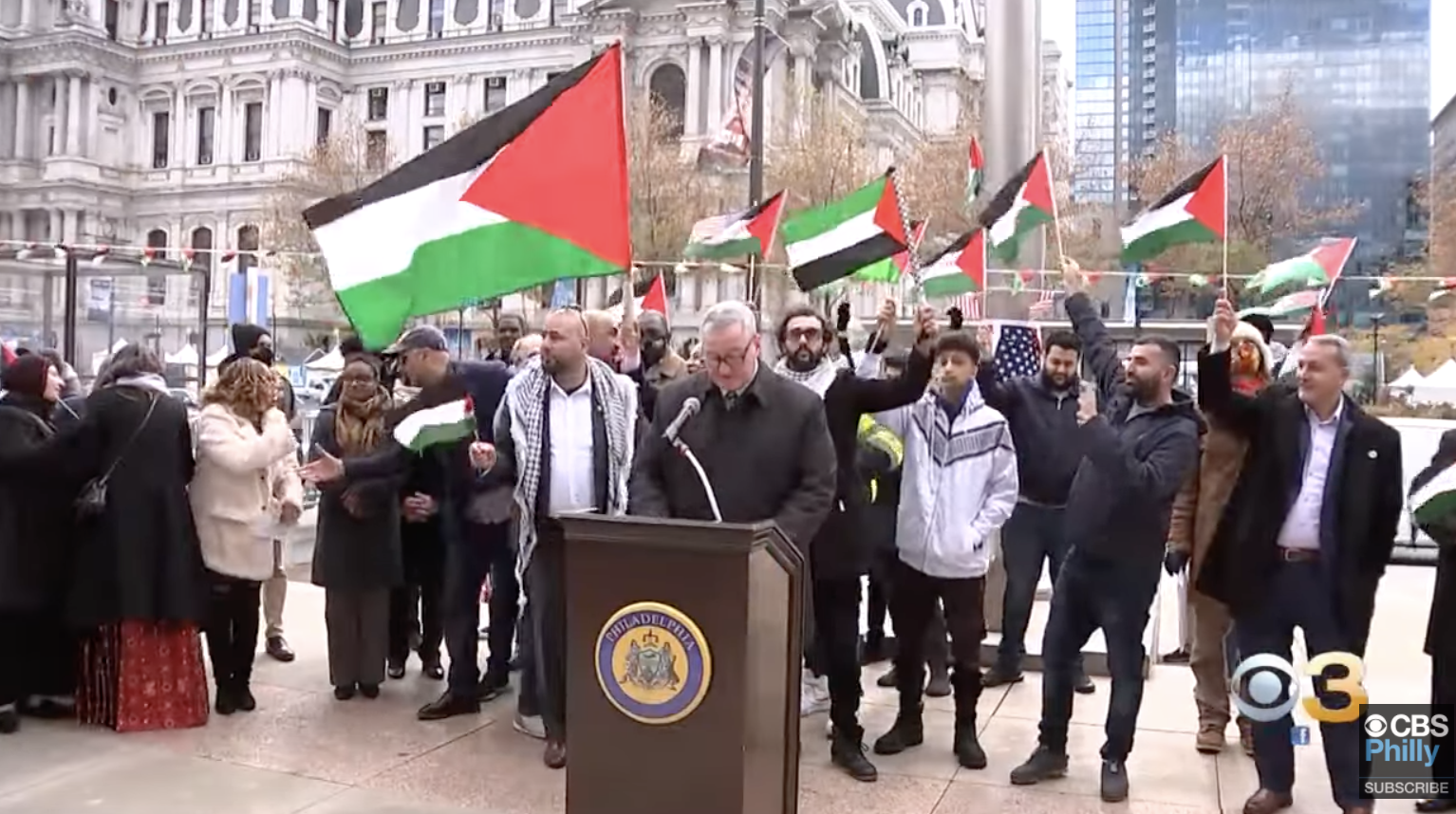 Prior to the rally, which took place on the first day of Chanukah, the Israeli consulate in New York sent Kenney a letter asking him not to attend.

“The Greater Philadelphia Chapter of the Zionist Organization of America views it as reprehensible that some Philadelphia politicians sought to undermine the Jewish community earlier this week by participating in an event that garnered support for a movement that is designed to destroy the only Jewish state, Israel. It is reprehensible that the city would host such an official event and shocking and disgraceful that officials who represent all Philadelphians would attend it and participate in it,” the ZOA said in a press release.

Over the years, the PLO, a terrorist organization, has murdered thousands of Israeli Jews and scores of Americans, said Steve Feldman executive director of the ZOA’s Greater Philadelphia Chapter.

“Why any of these individuals would want to support a movement or a cause that has one of its outcomes and agendas to harm another people is troubling?” Feldman asked.

Some are Democratic Socialists whose party is anti-Israel and supports the Boycott, Divest and Sanction (BDS) movement against Israel. There are also PLO members who use the chant, “From the river to the sea, Palestine will be free,” a call for the destruction of the state of Israel.

Other participants, who are traditional Democrats, might not be aware of the implications.

Burgos counted himself in the latter camp. He said he thought he was just supporting the “Palestinian community here in Philadelphia,” he explained when asked why he participated in the event.

Kenney did not reply to a request for comment from the Delaware Valley Journal. However, he told the Forward that Philadelphia’s Office of Immigrant Affairs (OIA) and the Office of City Representative (OCR) have been in discussions with representatives of the local Palestinian community to host an event that recognizes their contributions to the city and region. The Palestinian Day of Solidarity resulted from those conversations and is not a statement on international affairs or the ongoing Israeli/Palestinian conflict.

“I participated in the event as I have done for countless events recognizing our ethnically and religiously diverse communities,” the mayor said, pointing out that he also attended an event on antisemitism.

A reporter at the event tweeted that Saval, while speaking at the podium, referenced a “right of return” of Palestinian-Arabs to Israel — which Feldman described as a known demographic ploy to destroy Israel. Saval also mentioned the “occupation” of Palestine, a “demonstrably false canard,” said Feldman. And Saval quoted a poem by Mahmoud Darwish (who was a member of the PLO), and then called out: “Free Palestine.”

“There never was an Arab nor Muslim state in the region called Palestine prior to the amputation of 78 percent of the designated Jewish homeland to create the nation of Jordan,” the ZOA release said.

Gauthier tweeted, “We stand with our Palestinian neighbors. We see you, we value you, and we empathize with your struggle — to resist occupation and oppression, & to be recognized as a people.”

Brooks tweeted, “Today we recognize that our struggles are interconnected and we celebrate the beauty, richness, and diversity of our wonderful city.” On Facebook, she posted: “It is equally important that we advocate for the fair treatment of our Palestinian neighbors at home and abroad so that all people may live with dignity, safety, and sovereignty. We must recognize that the history into the present moment of Palestine is marked by struggle. For decades, Palestinians have faced discrimination, displacement, violence, and occupation.

“As a Black woman, I know that a threat to the rights and dignity of any people is a threat to us all. Because I know that our struggles are intertwined, I know that so too is our fight for liberation. And I know that when we lead with solidarity, we win. To all of our Palestinian friends and neighbors: may we all know freedom and justice in the new year ahead. Thank you for being a part of our beautiful city,” Brooks added.

Kenney may not have mentioned any geopolitical issues, but the picture of him with a backdrop of PLO flags was a victory for PLO propaganda, critics say.

And the fact that elected Philadelphia officials stood under the PLO flag should trouble Jewish residents and business owners, said Feldman, who is also concerned that other Jewish leaders have not rebuked Kenney and the other officials for attending the Palestinian event.

“The acceptance of this by Jewish leaders is very troubling. I have not seen a public statement condemning this by any other Jewish organization or other organizations,” Feldman said. “All decent people should be condemning anybody who calls for ending the Jewish State of Israel and establishing a state of Palestine.”

“People are being taken in, hoodwinked by propaganda and lies,” said Feldman. “The bigger and more outrageous the lie, the more it is repeated.”

Days after the Palestinian event, the city’s director of commerce, Michael Rashid, resigned after allegedly making antisemitic remarks to employees. Rashid said he apologized to Jewish leaders for “inappropriate” comments.

In a statement Sunday, Kenney said, “I’ve accepted Mr. Rashid’s resignation today in light of his inappropriate comments. The work of the Commerce Department is far too crucial—and it’s important that the department stays focused on its mission of supporting Philadelphia’s business community at this critical time as we continue to recover from the devastating impacts of the pandemic. The city is committed to ensuring a fair and inclusive working environment where the values of respect and dignity are upheld.”