Live Christmas Trees Plentiful in PA But Prices May Be Higher, Growers Say 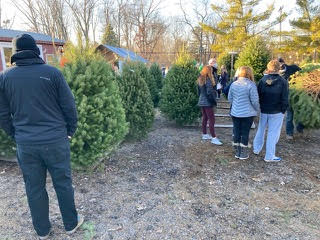 Pennsylvania produces an abundance of Christmas trees–roughly one million each year according to the Pennsylvania Christmas Tree Growers Association (PCTGA).

And despite supply chain issues plaguing large segments of the economy, consumers looking to indulge their preference (or passion) for having a live tree in their home shouldn’t have much trouble finding one.

Michelle Keyser is director of communications for the PCTGA, which represents more than 150 tree growers virtually all located in Pennsylvania, and also a handful in New Jersey, New York, and Maryland.

Keyser says live trees are available for those who want them.

“Their message is ‘We’ve never run out of trees,’” she said. “That said, demand is high. We saw that last year with COVID, people coming out with their families and wanting the experience of getting a real tree. And they expect it and are seeing that that continues this year.”

Keyser says some varieties of trees are limited however.

“We’ve seen that because back in 2008 there was the economic recession so that affected the number of trees that were planted back then,” she said. “Now, those trees are mature. So, we are seeing limits but we don’t expect to run out of real Christmas trees.”

It can take up to a dozen years for a newly planted Christmas tree to mature, depending on the variety. Keyser advises those looking for a specific variety of tree to shop early.

Jay Bustard is an owner of Bustard Christmas Trees in Worcester Township in Montgomery County. The business has existed for 92 years.

Bustard noticed an uptake in live tree sales last year during the pandemic.

“A lot of people last year with COVID were excited about getting out of their homes and getting out into the fresh air, and everything else,” he said.

Bustard notes that tree farms today are feeling the impact of the 2008 recession, resulting in shortages. 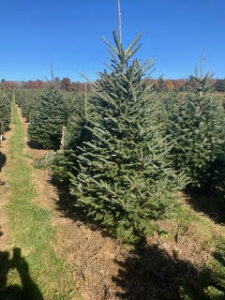 “A lot of our competition never opened up because they couldn’t get trees. And those that did open up, opened up with a much smaller amount of trees so now they’re sold out,” he said. “People like us, who are able to manage their trees better because we have our own farms (two in Bustard’s case), can look and see what we do and don’t have.

“We can plan for the future and say ‘We’re going to need this many trees eight years from now’ or whatever. People like us tend to have a little bit better supply,” he said.

Harry Bohlman , along with his wife Joan, owns and operates the Winterberry Christmas Tree Farm on a 28-acre site in Pipersville. The couple first got into the business of raising and selling Christmas trees some 51 years ago on a 35-acre property, also in Pipersville before closing it in 2004 and moving to their present location.

Bohlman says the market for live trees has ebbed and flowed through the years.

“The artificial tree industry hurt us in the early 90s,” he said. “Around 2010 the trend started going back to real trees.”

Bohlman says he has not noticed a scarcity of trees, with the exception of on the West Coast because of fire damage.

When it comes to price, Bohlman says he works to keep his rates in line with industry standards. He’s had customers tell him that some of his competitors have raised their prices significantly this holiday season.

Bustard raised his prices this year, albeit reluctantly.