‘Dems for Florio’ Target Muth Over Allegations of Abuse, Transphobia 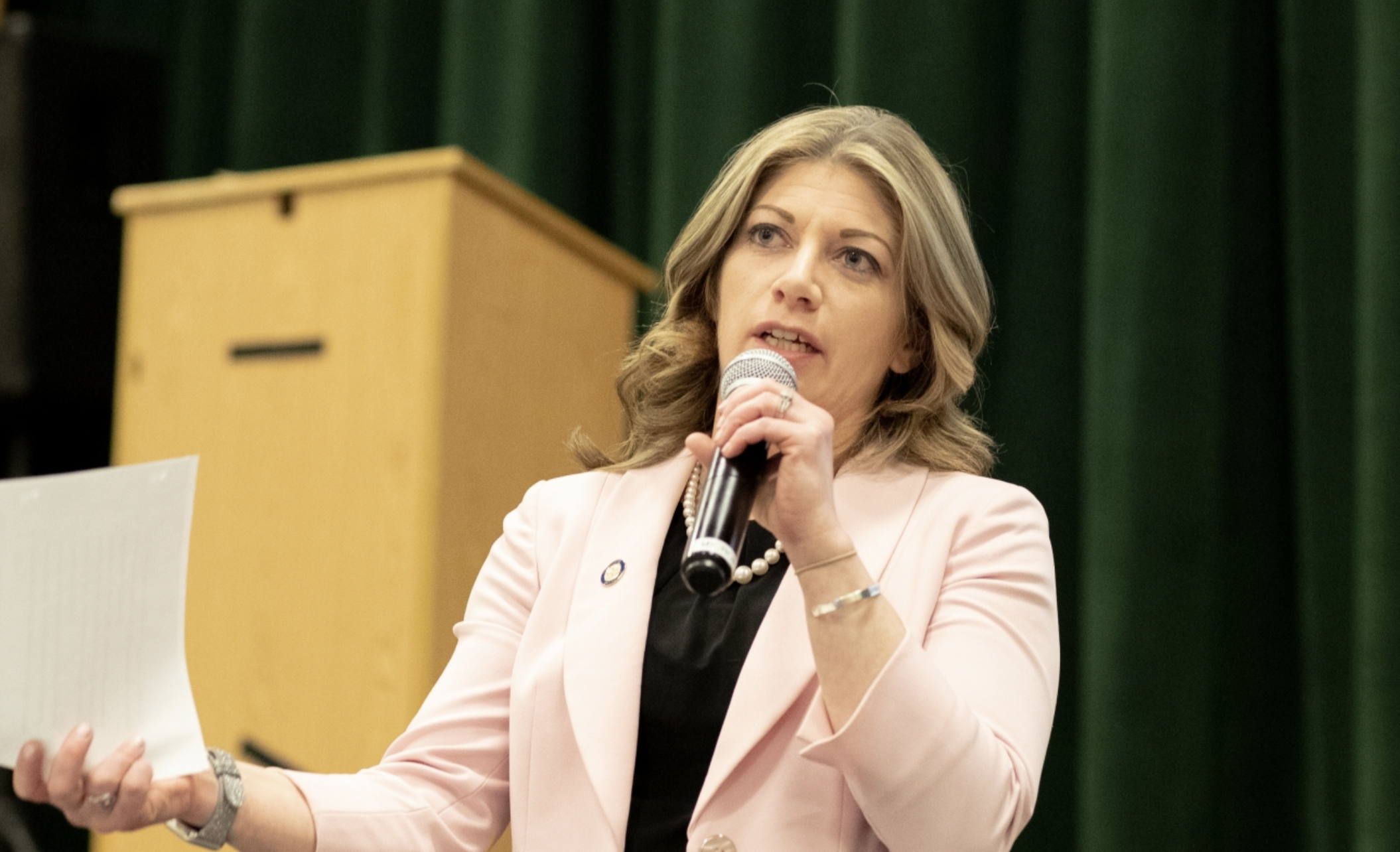 Attack ads are hitting mailboxes in the state Senate District 44 contest between incumbent Democrat Katie Muth and her Republican challenger Jessica Florio. One stands out because it is an intraparty crossfire: The call is coming from inside the house.

“Democrats for Jessica Florio” sent mailers in the last week attacking Muth for recent reports that she fostered a hostile, bullying work environment in her Senate office and that she made a transphobic remark about Admiral Rachel Levine, a transgender woman who was previously the state’s health secretary.

Muth’s seat is considered one of the closest Senate races this midterm. The district, based mainly in Chester County but also touching parts of Montgomery and Berks, is evenly split between registered Republicans and Democrats. Muth won in 2018 by a 52-48 margin in a Democrat wave year.

The front side of the mailer says Muth “is an abusive employer,” and that she is “transphobic,” and concludes the argument on the flip side with “Bigotry is not progressive.” 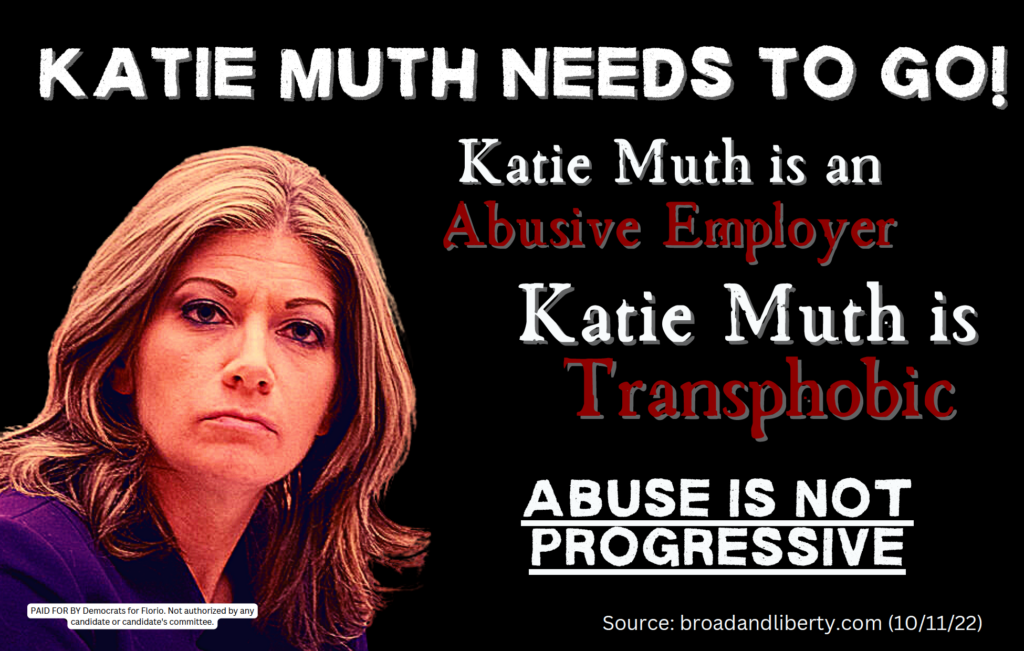 “I’ve been a loyal party operator my entire life,” said Adrienne Redd, a Montgomery County Democrat who has run for office in the past. Asked why she was part of the Democrats for Florio effort, Redd said it’s because of her values. “Humanity and kindness are my highest values. and I am a pragmatic progressive with impeccable credentials.”

In the first report, Broad + Liberty used employment data from the Pennsylvania Senate to show Muth, still in her first term, had quickly cycled through numerous staffers, including four chiefs of staff and four communications directors. The report said her office witnessed 200 percent turnover, and no other Senate office came close to approaching that figure.

The report also included a Facebook quote from a former staffer who alleged Muth fostered a hostile work environment.

“All you have to do is check the public records to see that she’s had the highest turnover of chief of staff and everybody all the way down of any legislator ever in the history of the state of Pennsylvania.” And, Redd said, some of those staffers sought mental health treatment after their experience, including for PTSD. 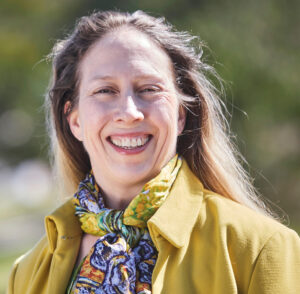 Muth did not deny the high turnover rate at the time, arguing  that her political mission “requires that I hold myself and my team to high-performance standards.” But in a statement to DVJournal, Muth now rejects the allegations as a “personal vendetta” against her from disgruntled Democrats.

“Personal vendettas have no place in government or in politics,” Muth said. “This election should be about issues and the ability to make an impact for our constituents and for all Pennsylvania residents. Since the beginning of this campaign, I have been subjected to outright lies, deceptive mailers paid for by dark money, and solicited, libelous articles in sham online publications like Broad and Liberty.”

[Muth’s entire statement to DVJournal can be found here.]

The mailer also references a second story about an official transcript of unsworn testimony from a former Air Force Major General who said Muth had called then-Pennsylvania Health Secretary Rachel Levine a “mess in a dress.”

The former major general, Eric Weller, had previously been the second in charge of Pennsylvania’s Department of Military and Veterans Affairs, and had some oversight of the Southeastern Veterans Center, a long-term care facility in Muth’s district that saw a higher-than-average death rate, especially in the earliest weeks of the pandemic.

Muth pushed out two of the top administrators at the SEVC, with the support of some upset families of residents. Weller believes those administrators were scapegoated as he theorized that culpability would either fall on the pandemic response of Gov. Wolf’s administration, or it could depend on the mid-level administrators.

Once again, Muth did not confirm or refute Weller’s claim about the Levine comment at the time of the first story. Today she is calling Weller a liar.

“Not only is Major General Eric Weller lying in his testimony, but he should be ashamed considering he was forced to retire due to his poor leadership, which resulted in dozens of veterans dying in the state-run veteran’s homes that he oversaw,” Muth said.

“The recent PAC that was created was done so to smear my reputation by a group of individuals loyal to Leach, who lost his bid for re-election in 2020 after losing nearly all of the support from the Democratic Party and the district that he served,” Muth said.

“Not surprisingly, my opponent has accepted their help in a last-ditch effort to salvage her campaign,” Muth added.

Even when she was a candidate for the Senate, Muth, a rape victim, signaled she intended to try and push Leach out for alleged sexual improprieties. The Senate Democratic caucus did eventually force him to resign.

The mailer alleges that ethics complaints have been filed against Muth, but no evidence in the public arena exists to substantiate that idea.

Michael Straw, who runs the Pennsylvania Republican Senatorial Committee, says it is time for Democrats to dump Muth.

“Katie Muth has spent the last four years abusing and bullying her staff. No one deserves that. Democrats should be distancing themselves from Sen. Muth.”

“The old saying in politics is ‘if you’re explaining, you’re losing,’ said one local political insider. “But this isn’t just ‘losing.’ She’s ‘losing it.’”