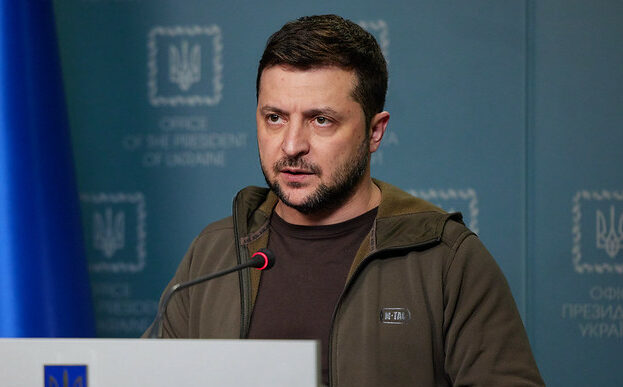 Ukrainian President Volodymyr Zelensky used both his talents as a video performer — along with an actual video — to make a powerful case for America to do more to help his war-torn nation fight off its Russian invaders. And while most of his remarks were delivered in Ukrainian, he used language that resonated with average Americans.

“Remember Pearl Harbor, terrible morning of Dec. 7, 1941, when your sky was black from the planes attacking you. Just remember it,” Zelensky said. “Remember September the 11th, a terrible day in 2001 when evil tried to turn your cities, independent territories, in battlefields, when innocent people were attacked, attacked from air.

“Our country experiences the same every day.”

“I have a need. I need to protect our sky. I need your decision, your help, which means exactly the same, the same you feel when you hear the words, ‘I have a dream.'”

Wednesday afternoon President Joe Biden signed a bill to send $800 million worth of military equipment and humanitarian aid to Ukraine, saying, “We’re going to continue to have their backs.” However, Biden did not act on Zelenskyy’s request for a no-fly zone.

“This morning, President Zelenskyy delivered a powerful and sobering address not only to the U.S. Congress but also to all Americans who value peace and democracy around the world,” said Rep. Chrissy Houlahan (D-Chester/Berks). “Many lines struck me, but he pierced the entire room when he said: ‘I see no sense in life, if I cannot stop the deaths,’ referring to all of the innocent children who have died. He also asked us to ‘do more.’ We must all ask ourselves how long we can delay providing the aircraft and weapon systems Ukrainians have asked for and need to defend their sovereign nation. I say we cannot delay one moment longer. In this historic moment, we must stand up for freedom and democracy around the world.”

Houlahan, however, does not support American boots on the ground or the imposition of a no-fly zone.

Congresswoman Mary Gay Scanlon (PA-Delaware) issued the following statement after Zelenskyy spoke: “This morning, President Zelenskyy reminded us: ‘Ukraine is not fighting just for Ukraine.’ His nation’s battle is a pivotal fight for freedom and democracy, not just in Ukraine but around the world. We must remain clear-eyed about the fact that a tyrant like Vladimir Putin will continue his quest for power until he is stopped. I am incredibly grateful to President Zelenskyy for speaking candidly with me and my colleagues about the situation on the ground in Ukraine during this dark time for his country and the world.

“I stand in awe of the courage and passion displayed by President Zelenskyy and the Ukrainian people as they fight to defend their homeland and democracy from Putin’s unprovoked, illegal war. Their resolve in the face of Putin’s evil acts will go down in history.

“This morning, President Zelenskyy called for more humanitarian and military aid to Ukraine, as well as increased economic pressure on Russia, and I expect the United States will respond to that call. The U.S. Congress and Biden administration are united in our determination to provide every feasible measure of humanitarian and military aid possible to the Ukrainian people until Putin ceases his unlawful attack on this sovereign nation. I believe it is crucial for the U.S. to rely upon advice from our military and foreign policy experts as we determine the best course to further support Ukraine.”

“President Zelenskyy’s address before Congress today was incredibly powerful and moving. What the world is witnessing is a modern-day Winston Churchill laying down his life for his country and honorably leading his people through a brutal and senseless war in defense of independence, peace, and democracy. President Zelenskyy undoubtedly exemplifies everything a leader should be and has continued to inspire the entire world.

“Equally, the United States must meet this moment with strength, unity, and leadership and immediately fulfill the requests of President Zelenskyy and the Ukrainian people. I continue to call on the Administration to deliver additional humanitarian aid and critical lethal defensive equipment to Ukraine, specifically military aircraft and air defense systems, so the Ukrainians can defend their skies.

“This should include approving the transfer of Polish MiG-29 fighter jets to Ukraine. The U.S. and NATO must continue to do everything in our power to firmly stand behind the people of Ukraine by supporting a humanitarian no-fly zone to give Ukrainians a fighting chance to save their innocent civilians. It is no secret that weakness invites aggression. Now is the time to send a message to murderous war criminal Vladimir Putin regarding what the United States intends to do to back our ally and friend Ukraine, rather than telling our enemy what we won’t do.”

And Sen. Pat Toomey (R-Pa.) said, “President Zelenskyy and the Ukrainian people’s bravery and resolve has shown the world that Ukraine will do everything they can to stand up to Putin. But today, President Zelenskyy once again made clear that the Ukrainian people need our help, including by ensuring ‘the Russians do not receive a single penny’ to fund the killing of Ukrainians.

“America can lead the rest of the world in answering Zelenskyy’s call by imposing secondary sanctions on the entirety of Russia’s financial sector. These sanctions would effectively prohibit foreign banks anywhere in the world, under the threat of U.S. sanctions, from making payments to Russian banks, including for oil and gas. Stopping these funds from flowing to Putin’s war machine is a critical lifeline for the Ukrainian people.

“The American people stand with Ukraine, and we must help them as they heroically fight for their lives,” said Toomey.

Congresswoman Madeleine Dean (D-Montgomery) tweeted this: “President Zelenskyy’s address to Congress this morning was deeply moving and very clear about what Ukraine needs.

We must do all we can to support Ukrainians in the fight to protect their democracy. Slava Ukraini.”

Sen. Bob Casey also sent a tweet: “I just watched @ZelenskyyUa’s address to Congress. He spoke clearly and eloquently about Putin’s brutality and outlined the support he needs from the world. The United States stands by the Ukrainian people and we will work with our allies to support their needs.”