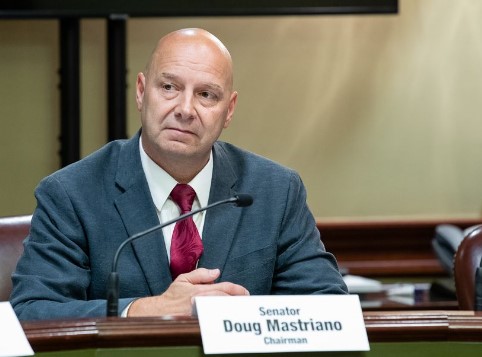 A school shooting is a parent’s nightmare.

Hoping to make schools harder targets and therefore less likely to be chosen by a would-be mass murderer, state Sen. Doug Mastriano said he will introduce a measure to permit teachers and staff to carry guns.

Mastriano, the Republican candidate for governor, said in a statement, “After the recent tragedy in Uvalde, I will be introducing a bill to enhance the safety of our children while on school property.

“I plan to introduce a bill that will allow school employees who possess a valid Pennsylvania concealed carry permit to be armed while on school property,” he said. “An employee who wishes to carry a firearm on school property will also be required to complete a firearms course from a certified instructor with a signed certificate showing completion of a training and proficiency course for the firearm the employee intends to carry on school grounds.

“Presently, 28 states make it clear in statute that teachers or school staff can be armed while on school property. Pennsylvania is not one of them. Mass murderers are often attracted to ‘soft targets’ where they know victims are not armed. According to the Crime Prevention Resource Center, there has not been a single mass shooting in a school where teachers and staff were clearly allowed to carry a firearm,” he said.

Tom Hogan, a lawyer and former Chester County district attorney said, “The proposal to have armed and uniformed school resource officers in every school, preferably police officers, is an excellent idea for every school (that) can afford it. SROs act both as a visible deterrent to school shooters and the first line of defense if a school shooter attacks.”

However, Hogan went on to say, “arming teachers is not a good idea for multiple reasons. Teachers are untrained; they would not be effective against a school shooter. In addition, busy teachers might leave their firearms in places where they might be stolen. Teachers are not likely to get trained, as they already have a full plate of training just to do their regular jobs.

“When law enforcement shows up a chaotic scene of an active shooter in a school, anybody holding a gun that is not in a police uniform is probably going to be shot, which would include some hapless teacher,” Hogan said. “If your school happens to have any ex-Navy SEALS or Army Delta Force operators on staff, feel free to arm them, but your average teacher is not going to help matters by being armed.

“In Chester County, one of our SWAT commanders was a school resource officer for many years.  I always considered that to be the safest school in the county,” Hogan added.

Former Upper Darby Police chief Michael Chitwood,  on the other hand, sees value in Mastriano’s approach. “I think it’s a good idea if your training is appropriate for these people who are responsible for carrying a concealed weapon. The training and the psychological wherewithal to handle that job.”

Chitwood said he knows the issue has become a political football with parents and politicians for and against it.

“But from my perspective, I think you have to do everything you can to protect the children,” he said.

“If a teacher chooses to exercise their Second Amendment rights, who am I to infringe upon them?” asked Michael Kittredge, a Jenkintown resident. “However,  (I) would hesitate to ‘require’ educators to be armed.”

Chad Demro said, “Harden facilities with layered security and revolving protocols. Enforce those rules with termination. Each school should have one or two arms vaults. Hire some men…not beta males…to handle firearms.”

Elkins Park resident Helaine Dubner Zlotnick said she is “in agreement to arm school resource officers guns if enough training is provided. Teachers should be able to be armed with a gun, but only if they feel comfortable and personally choose to do so.”

However, Alan Fels of Cheltenham said, “That is a crazy idea.”

And Attorney General Josh Shapiro, the Democrat running for governor, rejects the idea, too.

Shapiro said via Twitter, “We’re going to put a mental health counselor in every school, and give every student access to tele-mental health. We’re going to close the ghost gun loophole. We’re going to enact universal background checks. We’re going to finally pass red flag laws in Pennsylvania. I refuse to accept a reality where our children have to fear for their lives every time they go into the classroom. We have a moral obligation to act.”

Manuel Bonder, a spokesman for the Shapiro campaign said, “Attorney General Shapiro does not believe we should be arming teachers – he believes they should be able to focus on what they do best: teaching our kids. Shapiro supports existing Pennsylvania law that ensures teachers can teach and school safety is in the hands of trained professionals. As governor, he will continue working with law enforcement and lawmakers from both parties to ensure our schools are safe.”

A Morning Consult poll taken after the Uvalde shooting found most Americans support allowing teachers to arm themselves, 54-35 percent.