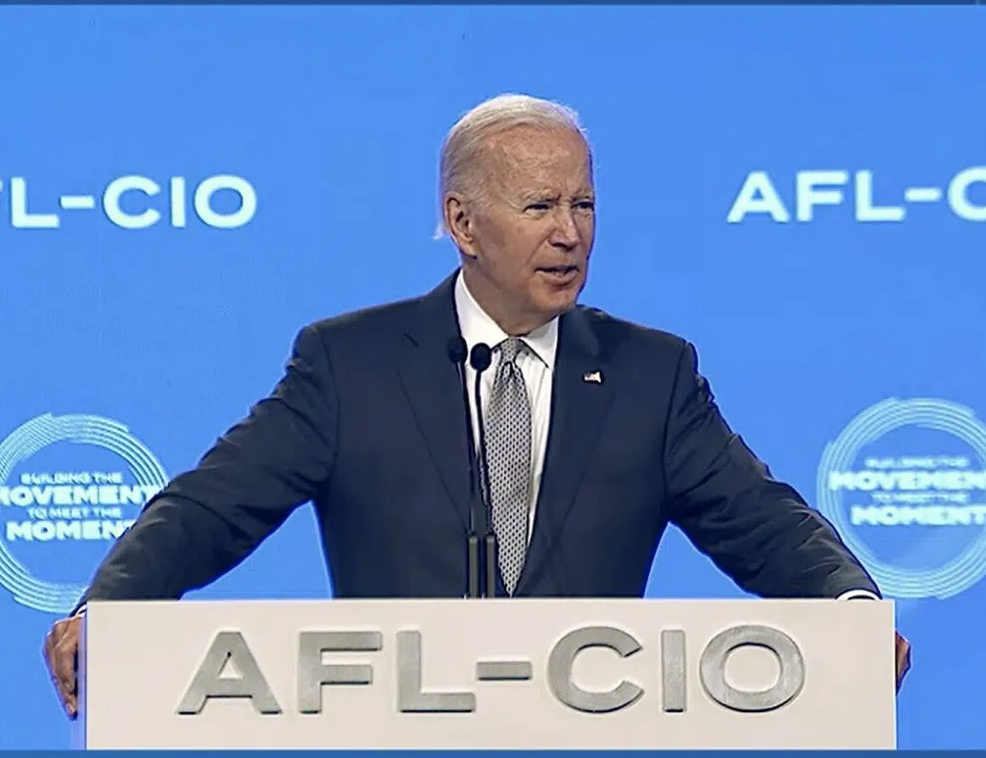 Speaking at the AFL-CIO Constitutional Convention in Philadelphia on Tuesday, President Biden pushed the blame for inflation on Republicans, including record-high gas prices.

Biden said he has a plan to bring down inflation, now at a 40-year high of 8.6 percent, and record-high gas prices, which are up more than $2.30 a gallon since Biden took office. But Republicans won’t let him execute it, he said.

“Under my plan for the economy, we made extraordinary progress, and put America in a position to tackle a worldwide problem that’s worse everywhere but here: inflation,” Biden said.

“The problem is, Republicans in Congress are doing everything they can to stop my plans to bring down costs on ordinary families,” Biden added. “That’s why my plan is not finished, and the results aren’t finished either.”

While the president was surrounded by prominent Democrats, Attorney General Josh Shapiro, the Democratic nominee for governor, was noticeably absent. Across the country, Democrats campaigning in swing states have been less-than-enthusiastic about campaigning with the unpopular incumbent as the midterms approach.

In Colorado, Sen. Michael Bennet said he “hadn’t really thought about it” when asked if he’d welcome President Biden to join him on the campaign trail. Earlier this year, vulnerable Sen. Mark Kelly (D-Ariz.) was also non-committal. “I’m focused on, right now, on things Arizonans care about, like the price of gasoline and groceries,” he said.

A spokesman for the Republican Governors Association (RGA) accused Shapiro of trying to hide his support for the president.

“Joe Biden’s disastrous policies have created an unsafe and unsustainable environment for Pennsylvania families, and Josh Shapiro has backed him the entire way,” said RGA spokesman Chris Gustafson. “Now that Biden is campaigning in the Keystone State, Shapiro failed to show up in support. Is Shapiro trying to avoid Biden or did convenient ‘scheduling conflicts’ land Shapiro far away from Biden once again?”

Shapiro’s spokeswoman says it was just a case of bad timing.

Shapiro had a previous commitment in Pittsburgh, spokeswoman Molly Stieber said. Shapiro was with the “president in April at the White House for the President’s announcement on closing the ghost gun loophole and was with him in Philadelphia during his last visit,” she noted.

During his speech, Biden urged union members to vote for Lt. Gov. John Fetterman, the Democratic nominee for U.S. Senate.

Union membership has dwindled over the years, and with it union power. Only 10.3 percent of the U.S. workforce was represented by a union in 2021, down from more than 30 percent in the 1950s. The numbers are even lower for private-sector employees, where union membership has fallen to 6.1 percent in 2021 from 16.8 percent in 1983, according to Reuters.

And while the president was in Philadelphia talking up union jobs, his administration back in Washington was floating the idea of ending some of the tariffs on Chinese goods put in place by the Trump administration.

“We have said from the beginning, some Trump tariffs were irresponsible, and did not advance our economic or national security and instead raise costs for families and businesses,” White House press secretary Karine Jean-Pierre told the press traveling with Biden Tuesday.

“Biden talks about his Scranton roots, but he couldn’t care less about the struggles hardworking Pennsylvanians face today,” Republican National Committee Chairwoman Ronna McDaniel said. “Soaring inflation, record gas prices, and a baby formula shortage are only a few of the crises he’s dealt Keystone State families. Biden’s visit will only serve as a burden for down-ballot Democrats, as Pennsylvania voters will hold him accountable for his failures in November.”