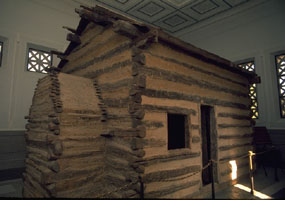 Lincoln’s birthday is coming up. It’s our annual reminder about the president born in a humble log cabin.

In pre-pandemic days, every year some 200,000 people would trek to the Kentucky backwoods to visit a national shrine. They walk up 56 steps into a granite and marble structure inspired by the temples of ancient Greece. There they find a tiny log cabin made of hand-hewn logs with no window or floor and only a mud-daubed chimney for heat.

A good many of those visitors are school kids. The lesson is, “Look at the great things accomplished by the man who started life in this lowly log cabin.”

It’s an inspiring story. There’s just one problem: Lincoln was no more born in that cabin than the Man in the Moon was.

How it wound up inside a magnificent monument is curiously amusing and totally American.

Yes, Abraham Lincoln was born in a log cabin on the Sinking Spring Farm in Kentucky on Feb. 12, 1809. His father built it himself. When the future president was two, the family moved to another farm down the road. Lincoln later said he had no memory of the place. In fact, he was embarrassed by his dirt-poor days, explaining his lineage was best summed up in the phrase, “The short and simple annals of the poor.” Others may have made a big deal of his family’s poverty; Lincoln distanced himself from it.

By 1860, he was what today would be considered a corporate attorney, as well as the infant Republican Party’s second presidential nominee. Its PR men knew a good gimmick when they saw one and branded him the Rail Splitter, for he had cut wooden rails used in fences to make ends meet as a young man.

They also played up the fact that he had been born in a log cabin. Some GOP leaders wanted to resurrect a stunt used by William Henry Harrison’s supporters 20 years earlier and display Lincoln’s birth cabin at campaign rallies. But despite searches, the cabin wasn’t found.

Fast forward several decades. The Civil War came, Lincoln guided the North to victory, was assassinated, and became an American icon. His log cabin birth followed him into the Hereafter as part of the Lincoln mystique.

Then in 1895, a lightbulb went off in entrepreneur Alfred Dennett’s imaginative brain. He took logs from an old cabin found in the general area where Lincoln was believed to have been born and—voila!—Lincoln’s birthplace suddenly appeared. Dennett constructed an 18-by-16-foot cabin and charged admission at fairs and exhibitions for locals to gaze in wonder at the sacred structure.

It was so lucrative that, wouldn’t you know it, in 1897 Dennett mysteriously turned up the Kentucky log cabin that Confederate President Jefferson Davis was (supposedly) born in seven months earlier and 100 miles away from Lincoln’s nativity.

He toured his new double-header attraction around the country. At one point the railroad flatcar carrying the pair derailed, and logs from each cabin wound up in their other when they were rebuilt. The display eventually landed on Coney Island, celebrated home of hawkers and hucksters.

When the 20th century dawned, some people became outraged at seeing the Great Emancipator’s birthplace treated like a carnival freakshow feature. A movement began to move it to a more dignified setting.

So, in 1906 the Lincoln Farm Association commenced a fundraising campaign. Mark Twain even got in on the act, penning an editorial in The New York Times that laid it on thick. “And this man, sprung from Southern poor whites, born on a Kentucky farm and transplanted to an Indiana village, this man, in whose heart knowledge and charity had left no room for malice, was marked by Providence as the one to ‘bind up the nation’s wounds.’ His birthplace is worth saving.”

And the money flowed in. Children eagerly responded, donating thousands upon thousands of pennies (in the days just before Lincoln began appearing on the coin in 1909). In all, $350,000 was donated, about $10 million today.

The National Park Service, which runs the site, now delicately sidesteps the authenticity issue, calling it “the symbolic birth cabin” while diplomatically pointing out Lincoln’s many accomplishments.

Visitors still make the long trip down Kentucky backroads to remember the very place Lincoln tried so hard to forget. 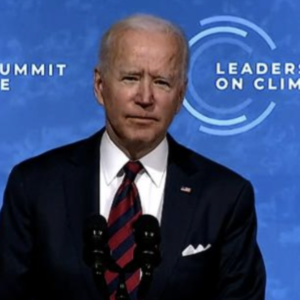