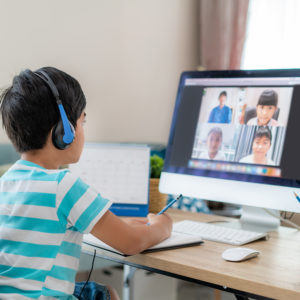 POTTSTOWN — Just as Montgomery County’s emergency order from November to keep school virtual for two weeks was expiring, students in the Pottsgrove School District spent the weekend thinking they were going back to school Monday.

But Sunday night, parents received notification that this was not going to happen.

The Pottsgrove School district decision brought an explosion of comments on social media sites as parents processed the reversal and scrambled for childcare. Some parents had opted to have their students stay virtual, but many others had selected to go to the “hybrid” school model, which staggers the student’s classroom time with virtual learning, in order to minimize class sizes.

“I am writing to you tonight to inform you of an updated plan for the Pottsgrove School District,” wrote Superintendent William Shirk on Sunday night. “This weekend, there has been an increase in professional and support staff call-outs for Monday, December 7th which prevents us from effectively covering our hybrid classes.”

Shirk defined the move as a “functional closure” due to inadequate staffing, but touched off a controversy as some in the community alleged mainly on social media that teachers staged a “sick out.”

The closure does not apply to students at the Western Montgomery Career and Technology Center School, but does apply to those in the district’s three elementary schools, middle school and high school.  Pennsylvania Interscholastic Athletic Association sports are also postponed until December 14, the superintendent said.

Several parents privately expressed concern that teachers and staff were being blamed for the last-minute call to keep the doors closed, saying they knew teachers who found out the same day. One father, who spoke with Delaware Valley Journal but asked to remain anonymous, said that the teachers found out about the closure at the same time as the parents.

The district teacher’s union, Pottsgrove Education Association, made public their concerns about the closure being blamed on staff on Monday night, with a letter sent to the superintendent by PGEA President John Shantz.

“By emphasizing a ‘functional closure’ as the basis for your communication, you have fueled emotional and unsubstantiated responses, on multiple social media platforms,” Shantz wrote. “Allegations that the District was ‘forced’ by a presumed ‘organized effort’ by the teachers to coordinate a ‘sick out’ were insinuated. Such allegations are unequivocally and patently FALSE — as you likely know — but the premise of your letter enflamed the passions of the community, in a manner that you did nothing to refute or dispel.”

Citing the district’s human resources department, Shantz said that there were 46 confirmed absences for Monday, out of 458 teachers and staff. He noted that he still did not know how many of those call-outs were teachers and how many were support staff.

“Also ​unknown is the proportion that would not be working, vs. working virtually,” he wrote in the letter. “Lastly, we also do not know when the district learned of this number, and why a last-minute suspension of the in-person hybrid model was necessary.”

In his letter to parents, Shirk said that the closure will allow the district to gain another week “to gather more accurate data from the Montgomery County Department of Health following the Thanksgiving holiday,” the superintendent wrote. “I will communicate those updates this Wednesday, December 9th, to determine further action.”

For students who are struggling with, as one mother on a Facebook parents group put it, “another day of zoom meetings in the kitchen,” Shirk said he recognizes the decision “is upsetting and stressful.”

“There are no easy or ‘right’ decisions in this current environment,” he wrote.  “At this time, I am following the recommendations from the Montgomery County Office of Public Health and the CHOP Policy Lab and erring on the side of caution and safety for all.”

PGEA’s Shantz noted that Montgomery County, like the rest of the country, is experiencing an increase in COVID cases, and that the uptick probably had more to do with the reason for closure.

Many parents were angered by the decision to stay virtual, but several expressed relief, too.

“I think it’s the right thing to do,” said Alyssa Nicolle Gephart, a mother of two Pottsgrove students.  “It’s been unfortunate the plans have changed over and over. However, as a healthcare professional, I see no reason why our kids should be in school during a pandemic.”

Gephart noted that teachers, like many other professionals, have rewritten their work for the digital world.

“If the CDC wants anyone to work from home who can, and teachers clearly can… then they should continue to do so,” the mother of a fifth and seventh grader.