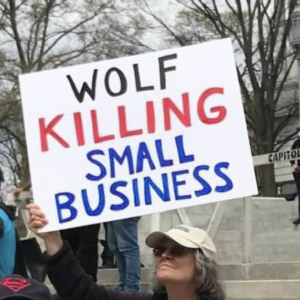 Dave Magrogan has owned and operated multiple successful Philadelphia-area restaurants for almost 20 years.  He recently expanded into Florida and was set to expand even further in 2020.

At his peak, Magrogan employed approximately 800 staffers across his 11 properties with three more set to come online this year. Today, he’s down to nine properties and fewer than 300 staffers.

“Now we have guys that are doing IT as well as kitchen inspections,” Magrogan said. “In a day, people are doing two or three duties instead of just one. That’s the only way we’re going to survive this downturn.”

Ordinarily Magrogan would prefer not to appear on a radio talk show like mine to discuss politics. He openly admits he has little politically in common with a conservative host like me. He told me his industry is mostly politically progressive. Personally, he believes in the causes and issues today’s Democrats claim they care about most.

Environmentalism, feminism, marriage equality and a plant-based lifestyle are just some of his core tenants.

“I should be this blue, flag-waving guy going up and down the street singing the praises of Governor Wolf,” he said.

But this week Magrogan agreed to appear on my show to say he and hundreds of his fellow progressive colleagues are voting Republican. “I’m putting out an email every two days to about two hundred small business owners in my network, and then they send it out to their friends. We all have changed the way we’re going to vote.”

As Pennsylvania restaurants and small businesses enter the ninth straight month of lockdown protocols issued by both the Commonwealth of Pennsylvania as well as additional rules applied by local municipalities, Magrogan says those he once considered political allies in Harrisburg have declared war on him.

Magrogan can’t be sure all the progressives with whom he works and commiserates will vote for President Trump over Joe Biden, but he’s very certain the elected Democrats down-ballot will suffer mightily as their once reliable base of support turns to the GOP.

But he doesn’t stop there.

Magrogan is convinced Governor Wolf and the Democrats of Pennsylvania won’t be satisfied until individual small businesses and restaurants like his are shut down for good. I asked him why he believes that about the party he’s always supported.

“Because it’s about the control and the fear. It’s just so clear that the objective is ‘lets just keep as many people home as possible.’ Restaurants are an easy button to push. They can pull your liquor license.

“It’s really like the special police coming to your place and shutting you down,” Magrogan said. “You don’t want guys with guns, in vests coming in and ripping your liquor license off the wall.”

What Magrogan and Pennsylvania small businesses owners understand is they don’t have the power or the legal deep pockets that big chain stores and restaurants do to retaliate in court, which is why they’re the easiest target for Gov. Wolf.

It’s why he says he feels he and many like him are left with no alternative on Tuesday but to turn on the political party they once fully supported.

“We have a joke going that we’re the new ‘deplorables,’” Magrogan said.