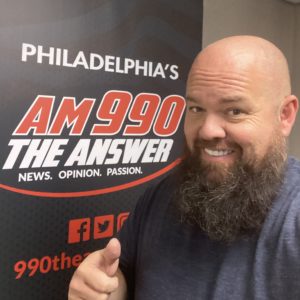 STIGALL: Grooming for Me, Not For Thee

This week’s kerfuffle surrounding Nancy Pelosi’s covert salon visit caught on video made me as furious as everyone else who’s been living under the inconsistent, arbitrary, and capricious COVID rules set in place by our elected leaders. I’ve talked to too many parents, business owners, and friends who are at the end of their ropes and running out of time under the dictates of their elected leaders in the Philadelphia region.

Pelosi claims she’s guilty only of “being set up” by the salon owner who assured her it was just fine to pop in for a wash and blow dry without a mask. You know, just like you can tell the IRS you’re not guilty of cheating on your taxes because your accountant told you everything was fine with his math.

The truth is I’m just as guilty as Pelosi, but today I’m going to boldly confess and own my crime publicly.  Yes, I’m guilty of participating in underground grooming.

I’ve been growing a beard for a while now much to the consternation of my wife, kids, and many of my AM 990 radio listeners who all want to know when I’m going to cut it off.  My answer is always, “When COVID is over.”  I say that because I know it will elicit in everyone the response I want:  “That could be forever!”

And that’s the problem.

I’d gone in for regular beard trims until Pennsylvania’s government shut down my barber in March. By June when I’d gone full Grizzly Adams and my barber was allowed to reopen, I called and asked if I could get a trim. After asking me a series of questions about my travels, my health, if I’d eaten any citrus fruits (I made that up), and taking my temperature—I was seated in the barber’s chair.

The irritated barber informed me that I had to keep my mask on, but if I removed the straps from my ears and held the mask to my face he could trim the sideburns.  It was better than nothing, so I took him up on it. It lasted five minutes.  He couldn’t in good conscience charge me for the transaction. We both rolled our eyes at how dumb it all was. I left a nice tip and went on my way.

Last week I decided it was time again for a trim. Once again I called my barber to ask for the same sideburn clean up. Only this time he told me to “head to the back.”  I walked past my regular chair, somewhat confused. I questioned another employee, “I was told to go to the back?” He responded, “You here for your beard?  Yeah, all the way back.”

In the darkest corner, tucked away inthe way backof the store, was one lone chair and mirror. I sat down awaiting an explanation for the unusual setting. My barber emerged and asked, “So what do you want trimmed?” I said, “Well, I guess the same thing as last time. I know you can’t trim everything, so whatever you can do.”

“Take off that f-ing mask,” he replied. He reached behind me and pulled out a folding partition that had been leaning against the wall. Shielded from view of the rest of the store, my barber and I participated in a backroom, bootleg, beard trim.

He angrily swore up a storm about Governor Tom Wolf and his callous indifference to small business as he went to work on my unmasked face. After a lengthy rant, he seemed to catch himself.  Concerned I might be a sympathetic Wolf supporter, he concluded, “Not that I have anything personally against the guy.”

I responded, “I’m sitting here participating in an underground grooming session. I despise the guy.  Carry on!” And he did. Describing the pain and agony so many in Pennsylvania were suffering—himself included—while his governor, he believed, remained blissfully ignorant to his struggles.

I tipped my barber well after this illegally ingenious transaction. I felt good thumbing my nose at a stupid rule that was hurting my barber’s ability to pay his bills. I’m going to do it again.

Pelosi wants to publicly shame her beautician while I want to publicly celebrate my barber. It’s truly a tale of two Americas. Which one would you rather live in?

STIGALL: Grooming for Me, Not For Thee Read More

MELANCON: Gulf Coast and California Should Serve as Lessons for PA

By Charlie Melancon on September 15, 2020
In 2020 fashion, August was a wild month. Across the country, things continued to be…
Read More

By Todd Shepherd on September 08, 2020
From coast to coast, people are fleeing America's cities for the suburbs, and now that…
Read More