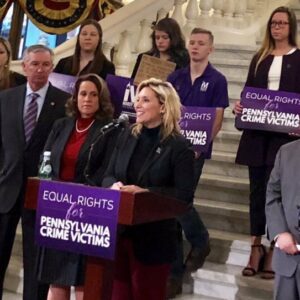 The fate of the proposed Marsy’s Law amendment to the state constitution now rests in the hands of the state Supreme Court. It was approved by Pennsylvania voters in 2019 but later struck down by a Commonwealth Court.

According to the grassroots group Marsy’s Law for Pennsylvania, if the Commonwealth Court decision is reversed, the law would add new enforceable rights for victims of crime to Article I of the Pennsylvania Constitution:

Deborah D’Addona, a victim services specialist for the Conshohocken-based Mothers Against Drunk Driving Pennsylvania said that if the Commonwealth Court decision is overturned, crime victims who request to be notified in advance about court events would have the power to petition the presiding judge to delay the proceeding until they can attend.

“To have protected, constitutionally-guaranteed rights would be a huge difference for victims. So we support it 100 percent,” she said.

Jennifer Riley, director of Marsy’s Law for Pennsylvania, said the earliest oral arguments could be presented to the Supreme Court is this fall.

Janine (her last name is being withheld by request), a Delaware Valley domestic violence survivor and victim advocate, supports the Marsy’s Law amendment. She said her situation got so bad that 911 dispatchers knew who she was.

“Part of why I’ve been advocating so long is because of what happened to me during my court process. There were (abuse and stalking) situations that I brought up to the (assistant) district attorney, who basically ignored my situation and took no action. I had to get my advocate in Harrisburg to take action on a Protection From Abuse (order) violation. Someone above (A.D.A.) ended up reaching out to me because there were additional court dates that came up that they finally notified me about,” she said.

Her ex-husband applied for a Post-Conviction Relief Act hearing she feels she should’ve been notified about.

“If a judge agreed that his rights were violated, I never would’ve known and he would’ve been released,” Janine said.

Many times, she only knew about a court proceeding because of a heads-up given by a police officer who is not obligated to provide such notification.

Delaware Valley lawmakers in the General Assembly had differing positions on a Marsy’s Law crime victims’ bill of rights.

“Marsy’s Law is problematic because it undermines due process. It takes away from rights that accused individuals have been given through our constitution,” Sen. Amanda Cappelletti (D-Delaware/Montgomery) said in a statement. “If we want to truly support victims of crimes, we need to properly fund the Office of Victim Advocacy, so they can provide the evidence-based resources that support people.”

Rep. Mary Jo Daley (D-Montgomery) feels Marsy’s Law overreaches and that criminal justice system reform would be more appropriate. “It puts too many cards in the hands of district attorneys and not enough in the hands of criminal defense attorneys. Victims’ rights are important, but it was going to take too much from criminals’ rights and it was going to make (the judicial process) more confusing,” she said.

Meanwhile, Sen. Bob Mensch (R-Berks/Bucks/Montgomery) believes the amendment would create a better balance of rights and evoked the image of the blindfolded Lady Justice holding a scale.

He said the Commonwealth Court ruled Marsy’s Law “was too broad and affected too many areas of the constitution. (I) think that interpretation is wrong. A rapist should not have more rights than the victim of the rape. Let’s bring it back to a middle ground.”

Mentioning the American Civil Liberties Union’s legal challenge that brought the proposed amendment before the Commonwealth Court, Janine said, “We’re not trying to change the law. We’re just trying to reinforce the rights of victims and allow us to be part of the due process. The victims are the ones who continue to get re-victimized over and over and no one seems to care.”

“There are some people who kind of argue, ‘Well, currently victims have statutory rights.’ And I would say absolutely they do. That has meant very little to victims or victims’ families,” said Leslie Slingsby, executive director of Mission Kids Child Advocacy Center in East Norriton, an organization that helps child abuse victims and their families get medical attention and therapy and navigate the criminal justice process.

“So when (victims’) rights are violated, there are no actual repercussions. There is no type of place that you would file a complaint. We can’t just rely on having a great district attorney, having a great state trooper, having a great detective in law enforcement,” she said.

Marsy’s Law is named for Marsalee “Marsy” Nicholas, a California college student killed by her ex-boyfriend in 1983. A week after the murder, Marsy’s mother encountered the ex-boyfriend in public, having received no notification that he’d been released on bail.

According to Marsy’s Law for Pennsylvania, the Keystone State is one of 15 states without a Marsy’s Law constitutional provision.

Brian Bingaman is a writer and editor in the greater Philadelphia area. He wrote this for Delaware Valley Journal.

Ice Cream Mogul Gets In His Licks in Philly D.A.… Read More