After hours of public comment Wednesday night, the Springfield Township Board of Commissioners voted 5-2 to approve a resolution banning the “thin blue line on an American flag” that the township’s Police Benevolent Association (PBA) has adopted as a symbol. Critics call the image, widely used at public events to honor fallen police officers, a “symbol of white supremacy.”

That argument carried the day.

The issue has roiled the township for a year and a half according to Board President James Lee, who said his father was a Philadelphia police inspector. Commissioners asked the PBA to change its symbol. The police union twice voted against altering it. And because the PBA is a “private entity,” the township cannot make it change its logo.

While many believe the symbol honors police, some people, particularly minorities, find it offensive, Lee said. And some extremist groups have adopted it as well. From a Back the Blue rally in Erie, Pa.

During public comment, Liza Meiris of the Cheltenham NAACP said fighting racism “is hard work” that can be dangerous and that people have lost their lives. But she urged the board to “disavow a symbol of white supremacy and do the right thing.”

Resident Neil DiFranco, a member of the township school board, said he appreciates what the police do to protect the community, but the resolution is necessary because of how the symbol makes some people feel. He said at the Monday night commissioner’s workshop session, “I heard racist comments and that scares me.”

A woman read a letter on behalf of her husband, who could not attend, noting that the resolution is unconstitutional and violates the First Amendment rights of free speech.

“It’s not the duty of a government body to censor speech,” she said. The Supreme Court recognized that hate symbols might be suppressed on public property, but the thin blue line flag is not a recognized hate symbol. 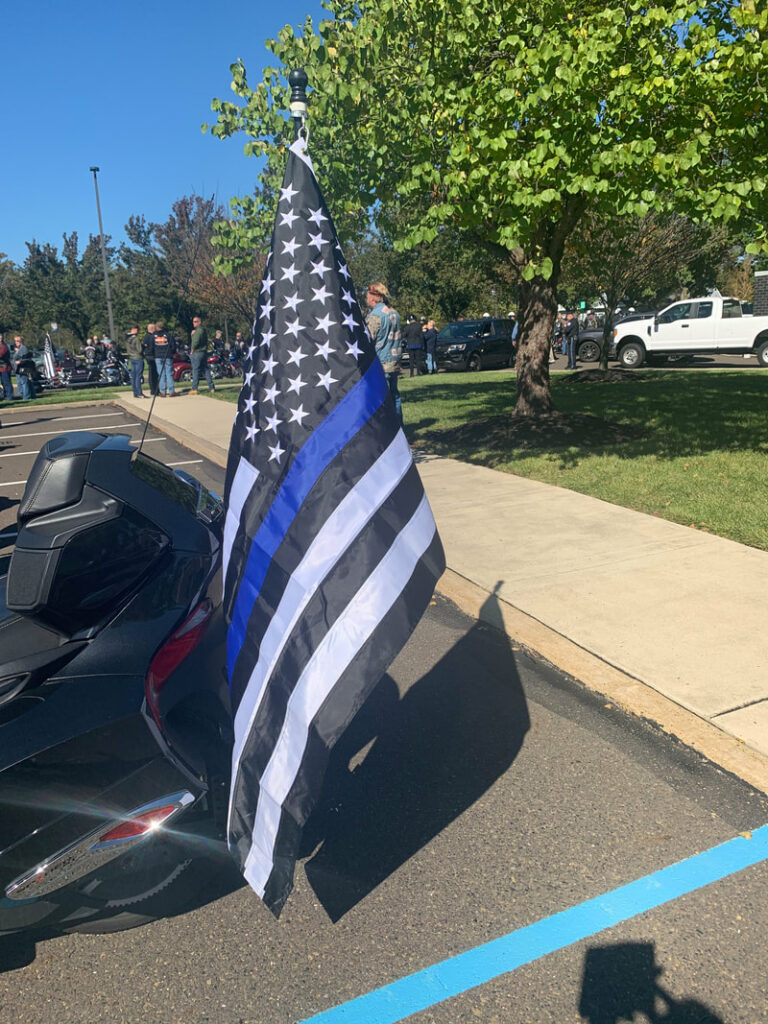 From a Back the Blue rally hosted by the town of Bensalem, Pa.

Many Delaware Valley communities have a very different view of the symbol. In 2020, the town of Bensalem hosted a Back the Blue rally that featured the flag rejected by Springfield. Attendees included Mayor Joseph DiGirolamo, Council President Ed Kisselback, and Congressman Brian Fitzpatrick (R).

John English said that when an officer was killed in the line of duty, his kids put a blue heart in the family’s window with the thin blue line.

“My house is now targeted,” said English. “I am looked down upon. My family is looked upon as white supremacists. And to use that term so loosely in this society is disgusting. It’s vile. These are the vilest people on earth and this is what you’re comparing people to.”

A man who has been a police officer for 33 years and served as a firefighter and in the military was also upset.

“Unless you’ve stood in the shoes of a police officer, you really don’t know what we do,” he said. Most officers are good, although he acknowledged there are a few who are not. “Nobody goes to work wanting to kill anybody,” he said. The summer of 2020 “was the busiest summer I have had, having rocks and bottles thrown at me, being called names, watching buildings burn down that had people’s apartments above them, stores looted, under the color of BLM…You are asserting every time you see the thin blue line flag that person is a racist. That doesn’t make it racist…Because I support that flag it is not a MAGA event. It’s a morale issue for police. It’s freedom of speech.”

Commissioner Peter Wilson said, “We have extended numerous opportunities for compromise with the PBA. They’ve been rebuffed…These symbols cannot be allowed to exist if they cause offense to anyone in our community.”

Commissioner Eddie Graham said he grew up in Philadelphia and had “different experiences with the police department” than some of the others.

The PBA did not respond to a request for comment.