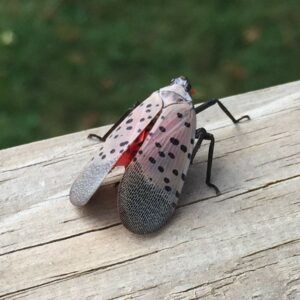 The spotted lanternfly, an invasive insect native to Asia, could cost Pennsylvania up to $324 million annually and lead to the loss of some 2,800 jobs, affecting area farms and vineyards throughout the Delaware Valley.

Pennsylvania politicians are lending their voices to the call to wipe out the bad bug. U.S. Rep. Chrissy Houlahan (D-Chester)  announced her bipartisan effort with Rep. Brian Fitzpatrick (R-Bucks) to eradicate the spotted lanternfly. In a letter to Secretary of Agriculture Tom Vilsack, a bipartisan contingent of the Pennsylvania delegation joined Houlahan and Fitzpatrick in advocating for increased funding for research.

The spotted lanternfly was discovered in 2014 in Berks County and has since spread throughout Pennsylvania. The red and black insect has become established in isolated colonies and large groups from eastern Ohio to Connecticut and from northern Virginia to New York. Earlier this year, Penn State’s College of Agricultural Sciences completed an economic impact study on the spotted lanternfly, releasing the dire statistics.

Trish Brown, general manager of Paradox Vineyard, located in Landenberg, Pa., has seen the issue of spotted lanternflies first hand in her business.

“We were very aggressive over the winter to try and locate the egg sacks of these lanternflies and destroy them,” Brown said.

Brown encourages people to step on a spotted lanternfly when they see one and credits Penn State University and the campaign it launched to inform people on this issue.

“Penn State has done a great amount of research to educate the public as well as businesses that have been impacted by spotted lanternflies and the best way to treat and aggressively prevent damage,” Brown said.

The Pennsylvania Department of Agriculture has also offered multiple webinars on the spotted lanternfly. However, this launch has been impacted by COVID-19.

“Unfortunately, they weren’t able to continue the program, so none of the businesses were able to take advantage,” Brown added. “I don’t think COVID, in particular, affected the spotted lanternfly population, but I do think it has hindered the department from being able to help the businesses.”

Not only have spotted lanternflies impacted vineyards in the Delaware Valley region, but they have also affected area farms. Gale Bernhardt, co-owner of Indian Orchards Farm, located in Media, emphasized that while urban dwellers may wave off the issue as a pest problem, the risk is very real.

“It could put us out of business if we don’t take this seriously,” Bernhardt added. “Even if you don’t have lanternflies or live by a farm, it’s important to know how to kill them because it will hurt the food chain and take out organically grown fruits and vegetables that we produce.”

Bernhardt has invested a lot of time and money in her tomato fields, which she typically begins working in February, and the lanternfly infestation has been an immense frustration.

“They do a lot of damage,” Bernhardt continued. “When you try to chase them away, they just jump and bounce off to a point where you can’t catch them.”

Bernhardt typically attends the Pennsylvania Sustainable Agriculture Conference held in Hershey, Pa., where she learns more about the agriculture industry and interacts with other farmers. However, due to COVID, this event was held virtually this year, where one of the topics covered was spotted lanternflies.

“Losing that in-person conference was very crushing,” Bernhardt added. “There were farms that would’ve been able to defeat this and learn the right techniques.”

Both Brown and Bernhardt remain optimistic their aggressive approach on this front will allow them to overcome this challenge.

If you see a spotted lanternfly, it’s vital to report it online or via phone by calling 1-888-4BADFLY immediately.