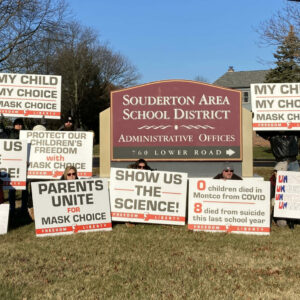 A group of Souderton Area School District (SASD) parents protested outside the district administration building this week, opposing the mask mandate for students, teachers, and staff.

Kaitlin Derstine, with Soudy Strong Conservatives, said the group feels betrayed by the district’s change in policy because they believed once the statewide mask mandate was struck down by the Pennsylvania Supreme Court, SASD would reverse its mask mandate as well.

Derstine says she is very disappointed that the school board members her group worked to help elect did not stand up to administrators and oppose the mask policy.

“In August our board had voted for mask choice for the whole district,” said Derstine. “Then the (state) mandate came out the first day of school.” Parents got an email saying the district would be requiring masks, she said.  “And then we had to fight to get an exemption form.”

“All the while the understanding was when the mask mandate lifts, we will get back to mask choice,” Derstine added.

Even though COVID cases have increased, Derstine says she believes parents should have the choice of whether their children should have to wear a mask for the school day. She pointed out other districts, like nearby North Penn, which has had strict mask and quarantine policies, also has COVID cases that are “exploding through the roof.”

“This is an airborne illness. We now understand that, and a cloth mask is not going to protect you from a virus that spreads through airborne transmission. It could protect better through droplet transmission, something like the flu, but not something like this coronavirus,” Gottlieb said.”

And a recent report by the BBC said it was “inconclusive” whether masks in schools stop the spread of COVID.

If district officials had told parents in August that they would require masks, parents could have planned accordingly.

“All of us parents (who oppose masks) would have found other options for our kids,” said Derstine. “We would pursue other avenues, formed ‘pods.’ Of course, the district didn’t want that because that would have cost them money.” 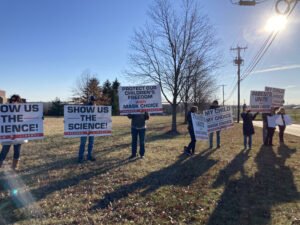 Tax dollars per student would have gone to support the learning pods instead of the school district, she said.

Or like-minded parents would have signed their children up for an online charter school, which the district would also have to fund, she said.

She noted that her son went to summer school last summer without a mask and there were no problems. When their kids are sick, parents will keep them at home, she said.

SASD Superintendent Frank Gallagher did not respond to a request for comment.

She is also concerned that teachers, the school nurse, and administrators are busy tracing contacts of students who have COVID, rather than educating kids.

“That is not their job,” said Derstine. “That’s not what we, the taxpayers, pay them to do.”

Some school districts in the area and around the country have been closing schools in the wake of increased COVID cases with the rapidly spreading Omicron variant, which has caused staff shortages.