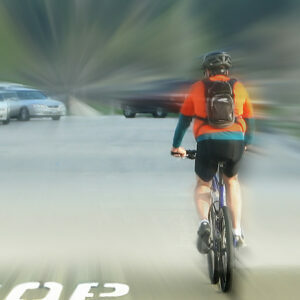 SOLOMON: What to Do When the Cyclist Hits You

The other day I was stopped at a light with a police car directly behind me. The light turns green and I begin to make a right onto a main street. Out of nowhere, a cyclist jumps off the sidewalk and almost plows into me on the passenger side door. I hit the brakes, then motion to the cyclist to go around, and it’s all over. Or so I thought.

A second later, I hear one siren bleep and see the police flashers on. My first reaction was, “It’s probably a little bit extreme for the officer to go after that cyclist, but maybe a reminder that the cyclist should pay closer attention is a good idea.”

You can guess the rest of the story. The officer was there for me. I pull over right away and when the officer comes out I politely greet them and explain what happened. The officer didn’t say anything, returned to their vehicle and came back about 10 minutes later with a $200 ticket – my first driving infraction in over 30 years.

It drives me bananas that every single day I see cyclists disregarding stop signs and lights. In my city, it’s the norm for cyclists to run every stop sign, every light, and basically drive like the city streets are a postmodern playground.

Yet cyclists are remarkably vulnerable. As Charlie Cartwright, a Florida personal injury lawyer, points out, “The types of injuries that cyclists endure every day in the United States are deeply horrific. These accidents happen quickly and are often fatal. Bicycles and cars sharing the road isn’t a new thing, but it’s getting worse, not better.”

So, from a legal perspective, when it’s actually the cyclist who is the aggressor and at fault, what can a car driver do if their car is hit by a cyclist?

A driver could certainly attempt to make a claim against a cyclist who causes damage to their car, but because of the massive imbalance between the damage that a car can do to a cyclist and the damage a cyclist can do to a car, in practical terms the driver is probably better walking away and being thankful it wasn’t worse for them. My European sedan weighs 3,930 pounds with me in it. The bicycle and cyclist I encountered were probably 120 combined. That math is often deadly.

While a car driver could get a lawyer or file a claim themselves in small claims court for property damage, many cyclists are going to be very close to judgment-proof and it’s just practically not going to be worth the time to pursue a claim even if there is some damage to the vehicle. If there truly is exceptional damage or personal injury, then, of course, it’s going to make sense to get your insurance company involved.

What’s the ultimate solution here to keep contact between cars and bicycles to the most absolute of minimums? There are city planners who have devoted their entire careers to this notion of bikes and cars sharing the road. But can it really be done safely for us in North America?

I really have my doubts. There are a lot of pros about bike lanes, which work really well in certain circumstances. But there are also a lot of cons with bike lanes, which show us that anyone sharing the road needs a much deeper understanding of the realities of what a car is and how it works. Every cyclist needs to understand that when we’re driving a car we have serious blind spots. When you appear quickly in them, we don’t have time to be responsive, no matter how much we actually want to share the road with you.

In the end, I’m really happy that I was able to see the cyclist before they hit me. I’m happier that they didn’t jump off the sidewalk and land right at the front of my car, because this would be a much more tragic piece.

Aron Solomon, JD, is the Head of Strategy for Esquire Digital and editor of Today’s Esquire. He has taught entrepreneurship at McGill University and the University of Pennsylvania and was the founder of LegalX, the world’s first legal technology accelerator. He wrote this for InsideSources.com.