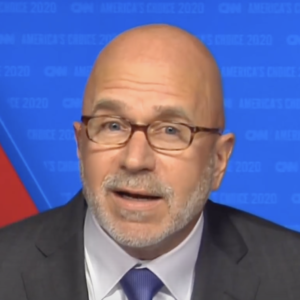 Smerconish Suggests Delay of Wallace Video is About Presidential Politics

Are Philadelphia politicians hiding police body cam footage of the shooting of Walter Wallace Jr. until after Election Day for political reasons?  That the theory of one national commentator with deep Philadelphia roots.

Wallace Jr., a Black 27-year-old, was was shot by police responding to a domestic disturbance call last Monday, who claimed he was threatening them with a knife. His death immediately sparked a fresh round of protests, riots and looting similar to the George Floyd outcry over racial policing issues from earlier in the summer.

“The [Kenney] Administration and the District Attorney expect [body-worn camera] footage and 911 audio files to be released by the end of next week after certain matters are resolved in close consultation with Mr. Wallace’s family and their legal counsel.”

Wallace’s family has already seen the video in cooperation with authorities, numerous media outlets have reported.

But Michael Smerconish, a lifelong Philadelphia-area resident and a national talk host on SiriusXM satellite radio said he sees political fingerprints all over the decision not to release the video sooner, one that possibly would disarm Trump of a rhetorical weapon in the last week of the campaign in the most important swing state.

“I read that statement, and I said to myself, ‘My God, it’s the election. It has to be the election.’ What other justification can be offered for the now additional week delay in the release of the body cam footage, quote, ‘after certain matters are resolved?’

“I do not have the facts to say Philadelphia is not releasing the body cam footage so as to have an impact on the presidential election,” Smerconish continued. “But boy, that really is my seasoned, informed opinion. That’s what I think is going on here: the city doesn’t want to have unrest — unrest that would then be shown by Fox on a loop, unrest that then would be capitalized on by the president.

“I could play the whole thing out for you. [Trump] would then say, ‘Look at this Joe Biden.’ Joe Biden would condemn it. He would condemn that violence. And nevertheless, the president would continue to try and use it as an albatross.”

On his program just a day earlier, Smerconish had also suggested that an earlier release of the video might spark protests and rioting so widespread that the environment would naturally depress voter turnout in the city, a Democrat stronghold that the Biden team is counting on for high turnout if his campaign is to win Pennsylvania.

When contacted for comment, a spokesman for Mayor Kenney’s office pointed to a second joint press release put out on Friday. “Philadelphians are experiencing an immense amount of pain, and significant unrest persists throughout the entire city,” that release said. “The collective hope of our local government and the Wallace family is that releasing the recordings on November 4 will provide enough time to calm tensions and for the recordings to be released in the most constructive manner possible.”

In the first night after Wallace’s death, at least 29 officers suffered “mostly minor” injuries in the sometimes violent protests that ensued in Philadelphia, according to the Inquirer.

“Police said officers arrested about 20 people in relation to looting at various stores in West Philadelphia, University City, Overbrook Park, and Center City, some of which were not near the protest,” the Inquirer report also said.

A curfew was imposed and the Pennsylvania National Guard was deployed into the city on Friday.

The new national reckoning on race after the death of George Floyd earlier this summer at the hands of police in Minneapolis has ignited fresh political debate at all levels of government, but especially at the presidential level.

The Trump campaign has frequently pointed to the unrest that was seen in the wake of the Floyd death claiming Democrat mayors in large cities were incapable or unwilling to stop it. At one point in the summer, President Trump suggested Philadelphia as one of the cities to which he might send federal troops to quell the unrest.

In response, the Biden team has accused the president of being insensitive to or sometimes even fanning racial resentments for political gain.

The stakes are high as many election analysts predict Pennsylvania could be the state that determines the resident of 1600 Pennsylvania Avenue for the next four years.

Polling expert Nate Silver of the website fivethirtyeight.com says Biden becomes an “underdog” if he doesn’t win Pennsylvania — long considered the former vice president’s “home” state even though he represented Delaware in his decades of service in the U.S. Senate.