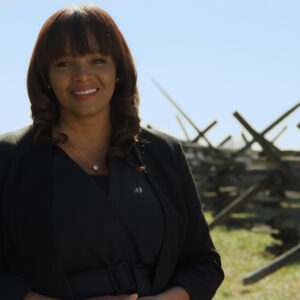 In the 2020 election cycle, Barnette ran unsuccessfully for Congress against incumbent Madeleine Dean (D-4th District).  But, Barnette, an Army veteran, is not afraid to keep fighting or of the rough-and-tumble world of politics.

Barnette grew up on a small pig farm in southern Alabama that had “no insulation, no running water, with an outhouse in the back.” She became emotional when she spoke of the loving environment she came from and how she never knew that her family was poor, only that her mother and grandparents loved her. Although the community was predominately Black, race was never an issue. Rather, she saw members of her community “work hard and try to raise their family” and didn’t think she was “missing out on anything.”

She wants to instill the values of love and freedom in her own children and homeschooled them for six years. Barnette and her husband both hope to ensure they are “raising good people” who will thrive as adults. Those values are part of her drive to run for elected office, she said.

As a young adult, Barnette joined the Army Reserves and traveled the world. Her fondest military memories were of her early years when she worked with the Criminal Investigation Detachment (CID) unit. Barnette was the only Black person on a team of  otherwise all-male soldiers. She never felt discriminated against, she said.

Looking at the country today, Barnette believes her strong, traditional values can help turn things around. She sees issues like the immigration crisis at the border, the ongoing divisions that were heightened during the pandemic and the pandemic itself as reason to step into this “very public position.”

When asked what policies she’s most passionate about, she gave a simple answer: “Freedom!” She quotes Edmund Burke by saying, “the only thing necessary for the triumph of evil is for good men to do nothing.” Barnette believes that this nation is “on the precipice” and that we, as a nation, have “created a vacuum in our leadership” because “good people have just been living [their] lives,” and not getting involved.

A proponent of term limits, Barnette is passionate about ending the cycle of the “career politicians who have been groomed almost from birth.”

COVID-19 has stripped many people of their ability to provide for their families because remote schooling requires a parent to be present. In Pennsylvania, “there are some areas where if you have the money, your kids have been in school full time since September.”

Small businesses have been hit hard by the pandemic, and it’s a situation Barnette is also passionate about. While some  Pennsylvania businesses remain closed, Barnette says she is appalled by the “illogical” decisions to keep large chain stores open while “small businesses must shutter their doors.”

“This campaign isn’t about me. It’s about us taking back our nation,” she said.  She contends that her focus is on the American people and the “freedom to live our lives the way we want.”  And she claims she isn’t just speaking for the Republican Party but for all Americans.