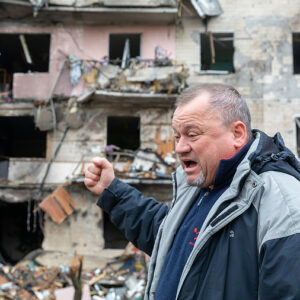 On February 24 –six months ago today — Russia invaded Ukraine for the second time in eight years. While Russian President Vladimir Putin assumed his war of aggression would be short and easy, a gallant Ukrainian defense proved him wrong. Now, six months into the conflict, Ukrainians are defending a front line that is approximately 1,250 miles long—equal to the distance from Washington, D.C. to Houston.

Ukraine is in a national struggle that will determine its geopolitical future. The country will either remain an independent nation or it will become a Russian colony. The outcome of this struggle will have long-term geopolitical implications for the West and the notion of national sovereignty in the 21st century.

Now that the war is entering its sixth month, there are four lessons that Western policymakers should accept.

First, motivation and leadership matter in warfare. Russia’s invasion reminds us that defending one’s family, village, city, or country is the greatest motivation to take up arms. Also, President Volodymyr Zelenskyy’s willingness to lead the defense of Ukraine from the heart of the nation’s capital—even though the White House urged him to escape—is a lesson in leadership that future generations will study. Ukraine’s actions show that when survival is at stake and leadership is strong, almost anything is possible.

Second, no country will give up nuclear weapons after seeing what happened to Ukraine. When the Soviet Union dissolved in 1991 and Ukraine regained its independence, Kyiv inherited about one-third of the USSR’s nuclear weapons stockpile. That made Ukraine the world’s third-largest nuclear weapons power overnight. In 1994, Ukraine agreed with Russia, the United Kingdom, and the United States to give up its stockpile in return for vague security guarantees. Kyiv is now paying a high price for that decision. Had Ukraine retained its nuclear weapons, Russia would likely have not invaded.

Third, China is closely watching what happens in Ukraine. Moscow is Beijing’s junior partner, and a weakened or defeated Russia means a weaker China. Beijing is also watching how Western powers support Ukraine, so a strong and victorious Ukraine makes Taiwan stronger, too. Some have suggested that the US should sacrifice its security interest in Ukraine to focus on the threat from China. Yet the choice between security in Europe or security in Asia is a false dichotomy. In terms of U.S. national interests, those two regions are intimately linked.

Finally, the most important lesson is Ukraine needs to defeat Russia militarily. Some have suggested that the West should not “humiliate” Putin, or that he needs an “off ramp” from the conflict to save face. Meanwhile, others suggest we should arm Ukrainians merely to help them secure better terms at the negotiating table. That is all wrong. Ukraine will never be secure until it utterly defeats Russia on the battlefield. The goal should be the full restoration of Ukraine’s national borders and the destruction of the Russian military operating inside Ukraine. Anything less merely kicks the can of Russian aggression down the road for future generations to deal with.

Ukrainians are not asking for, nor do they want, U.S. troops to help them fight Russia. All they ask for is the equipment, weapons, munitions, and financial resources required to give them a fighting chance.

Russia is a top geopolitical adversary for the U.S. For Americans who believe in strong and secure national borders, the primacy of national sovereignty, and the right to self-defense, support for Ukraine in the face of Russian aggression is a no-brainer.

Providing Ukraine with what it needs to fight Russia effectively will not be cheap. However, the costs that American taxpayers incur to help Ukraine would be money well spent and would pale in comparison to the cost of deterring a victorious Russia and an emboldened China on the global stage.

Let’s learn the lessons of the past six months to help Ukraine be victorious during the next six months.

Luke Coffey is a senior fellow at Hudson Institute, analyzing national security and foreign policy, with a focus on Europe, Eurasia, NATO, and transatlantic relations. He wrote this for InsideSources.com.