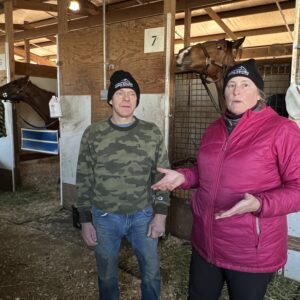 If you have ever been to the racetrack or watched the Kentucky Derby on TV, you probably never thought about the hundreds of behind-the-scenes workers who make the event happen.

The workers—grooms, hot walkers, exercise riders—were treated to lunch in their community clubhouse, an area with seating, a cafeteria, pool tables, and a laundry. About 200 workers live in dormitories on the backside of the racecourse property. Another 100 commute, said Jeffrey Matty Jr., PTHA executive director.

He noted the workers start early in the morning, taking care of the 1,300 or so horses in all kinds of weather. 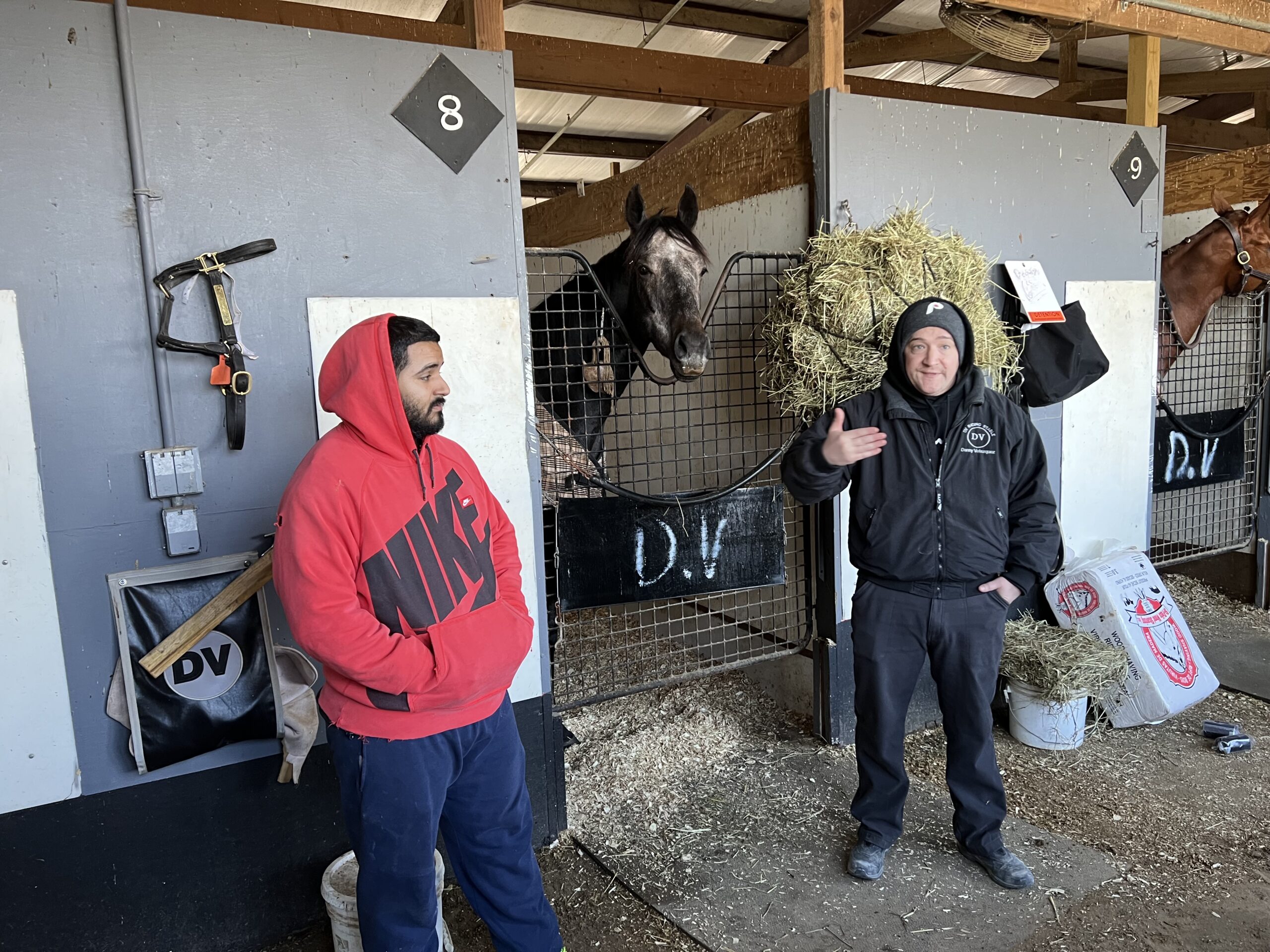 “Horses don’t understand what a holiday or a weekend is. They still need to eat, be provided fresh water, get their exercise, and be groomed,” Matty explained. “These men and women are out here daily making sure the horses properly care for and nurtured.  We appreciate all they do, and this is our small way of acknowledging their significant contributions to horse racing and, by extension, the state’s overall agricultural industry.”

The workers also receive the services of an onsite chaplain.

Groom Sean Fittipaldi said, “I think it’s great that people here recognize our hard work and dedication. They rely on me to be here every day and every evening.”

Trainer Kate Demasi and Fittipaldi took reporters on a tour of their Parx barn. Fittipaldi takes care of eight horses. Demasi trains 35 horses at Parx and another dozen at Penn National Race Track in Harrisburg.

Demasi started as a groomer and worked her way up to trainer. She said at first there were not many women in those jobs, but more women are at the track now. Parx recently debuted the first woman announcer, Jessica Paquette.

Both say they love their work and could not imagine being cooped up in an office.

Demasi grew up on a farm in Maryland and got her start with horses there before moving to Pennsylvania. 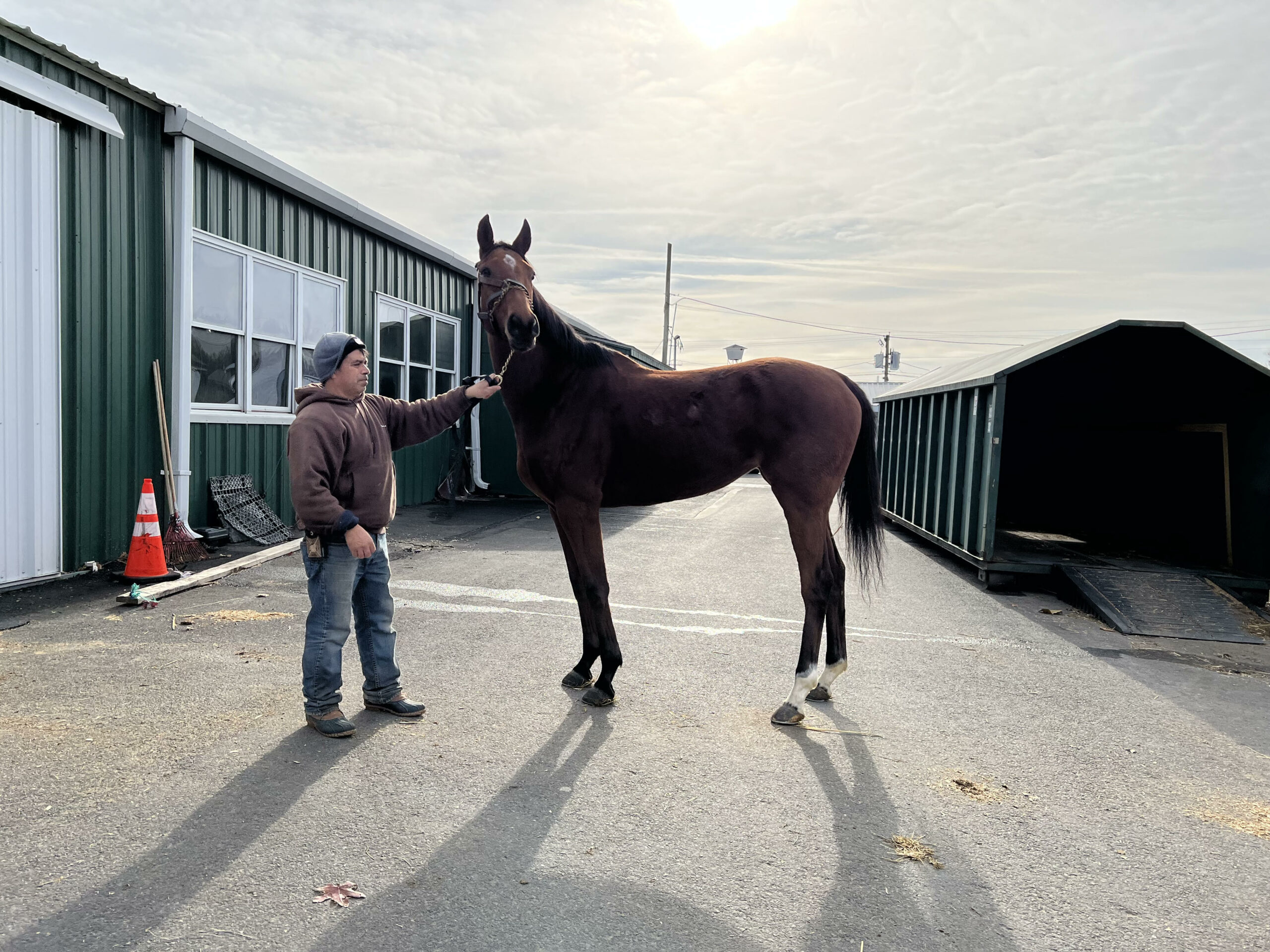 “We think of ourselves as a big family,” at Parx she said. “You see everybody at their best and worst.”

“We have all our mares in Pennsylvania,” said Demasi with Pewter Stable. There are state incentives for Pennsylvania breeders paid for through slot machine revenue.

The breeder of a registered Pennsylvania bred receives an award whenever that horse finishes first, second or third in any pari-mutuel race in the state. For Pennsylvania-breds sired by registered Pennsylvania stallions, the state breeder award amounts to 50 percent for maiden races (which are limited to horses that have not previously won a race) and 40 percent in all other races of the purse earned. For those sired by out-of-state stallions, the award (non-Pennsylvania-sired breeder award) is 25 percent (maiden races) and 20 percent (all other races), he said.

“It pays to breed them in Pennsylvania,” said Demasi. “Breeding is not a cheap thing to do. You’ve got three years into a horse before he runs. You’ve got the whole gestation year and then two years to grow up,” Demasi said. That is “three years of putting money through the Pennsylvania industry.” There are different caretakers on the farms, veterinarians, and hay and grain producers. “This is one piece of a puzzle, the piece that can actually make money.”

One of her horses, Winning Time, recently won the Pennsylvania Nursery Stakes, a race for 2-year-olds.

Another Parx trainer, Daniel Velazquez, said, “I train racehorses for a living, and I think that’s really cool. It’s a hard business to be in but it’s really rewarding when a horse wins and you see him cross the wife.”

One of his horses, Brooklyn Strong, ran in the 2021 Kentucky Derby.

“It’s the greatest accomplishment as a trainer,” said Matty. Everyone at Parx was rooting for the horse, he said.

Velazquez has a trick. He bribes his horses with mint candy.

“They’ll sell their soul for mints,” he said.

Velazquez got his start as a jockey. He rode for five years, and his dad also trained horses at Parx for 35 years.

One of his grooms, Jonathan Diaz, works with the racehorses day in and day out.

“I come here at 4 o’clock in the morning,” said Diaz. “I come here every day. It’s a lot of hard work, but it’s rewarding.” His dad also worked at the racetrack.

Demasi said, “There’s no difference from zookeepers. Anywhere you have animals, you have to have someone there. Sometimes a horse might not seem like himself.”

Fittipaldi said, “You’ve got to read them.”

When horses can no longer race, PTHA offers Turning for Home, a nonprofit program to retrain and rehabilitate them and place them with new owners.

Danielle Montgomery, who runs the program at Parx, said horses race an average of five years and some as long as 10 years, but they live for about 30 years.

Parx offers horseracing all year long. It is slated to have 151 race days in 2023.

At the luncheon, the caregivers received a winter hat and hooded sweatshirt from the Pennsylvania Horse Racing Association and the PTHA.