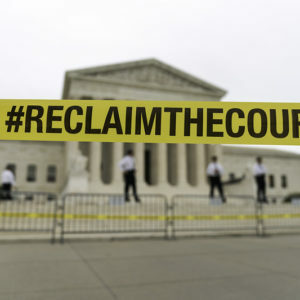 Should the Supreme Court Be Expanded? Local Legal Scholars Speak Out

With Democrats in Congress are touting a plan to increase the U.S. Supreme Court by four members — a move Republicans refer to as “court-packing” — local law school professors say that move could be risky and unlikely to succeed.

Sen. Ed Markey (D-Mass.) proposed Congress increase the number of justices on the Supreme Court from the current nine to 13, which would match the total number of justices to the 13 judicial circuits. It’s a decision Democrats say will strengthen the Court’s decision-making process.

Republicans reject this argument as window dressing for an FDR-style attempt to pack the Court with judges friendly to Democratic politics and policy. While FDR threatened the move to get his New Deal through, ultimately the Court backed down, FDR did not follow through on this threat and the New Deal changes became law.

President Joe Biden promised during his 2020 presidential campaign to form a bipartisan commission to examine how the Supreme Court is structured. However, with House Speaker Nancy Pelosi refusing to bring the matter to the floor, the prospects for a commission look bleak. Biden signed legislation creating the commission earlier this month, which will look at Court membership, length of service, as well as case selection, practices, and rules.

So how do prominent legal scholars in the Delaware Valley view the proposal?

Daniel Filler, dean of Drexel University’s law school, prefers not to take a political side on the Democrats’ push to expand the Supreme Court. Instead, he believes the debate is “understandable from both perspectives. There is a powerful desire on the one hand to maintain the legitimacy and the authority of the Supreme Court.” He warns the more “politicized” the Court becomes, the “riskier it is in terms of the ability for the Court to make difficult decisions.”

It’s that political aspect that Filler believes is causing the anxiety. People around the country, including in Delaware Valley, should care about the Supreme Court because there are a lot of “freedoms on the line all the time that the Court does or does not protect,” Filler said.

When the Supreme Court passed Roe vs. Wade in 1973, it drastically changed the course of women’s reproductive health. In 2015, the Court made same-sex marriage legal in all 50 states. However, Filler also stated the Court makes decisions for businesses that could drastically change the way we do things in the future.

People are also worried about preserving the Supreme Court institution. From the legal side, Villanova University law school Vice Dean Michael Risch says it’s important for Americans to know and care about “how our institutions are constituted.” Congress can decide how many justices are on the Supreme Court without the need for a constitutional amendment.

Risch went on to explain that from the political side, “elections matter,” and who we put in office makes a difference because the president nominates who sits on the Supreme Court. Echoing Filler’s views, Risch explains that from the human side, the Supreme Court can make decisions on issues as political as gender equality but as “arbitrary as software copyrights.”

While the expansion of the Supreme Court could compromise the integrity of the institution, Professor Craig Green from Temple University law school doubts the change will happen. He believes an increase is “very unlikely to succeed during this Congress.”

Democrats “are upset and they’re looking for something to do,” Green said.

Professor Green notes that “out of the last possibly 17 Supreme Court nominees, only four were nominated by Democratic presidents.” That means the shift to a more conservative Court has been occurring since 1969. It also means many issues that come to the Supreme Court now will “come up again in another ten to fifteen years.”

All three law professors who spoke to Delaware Valley Journal said citizens should take an interest in the Supreme Court and how its members are chosen. Polls show that Republicans traditionally tend to care more about the Court than Democrats and are more likely to cast votes on the issue.

However, polling last summer, when Justice Ruth Bader Ginsburg’s health made the composition of the Supreme Court a campaign issue, showed that interest from Democrats was spiking and it appears that interest remains high. And while Americans consistently say they oppose changing the number of judges on the court, polls have found a majority of Democrats support it so adding to the number of justices could be a win for Democratic politicians.