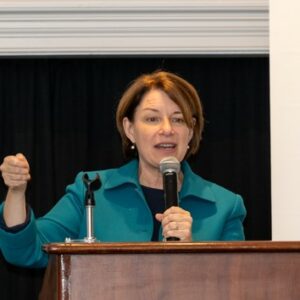 This was the CCDWLI’s first event since 2019, with events in 2020 and early 2021 cancelled due to COVID concerns. The organization worked to ensure the safety of all guests and attendees by requiring proof of vaccination to enter Sunday’s sold-out event.

“We were privileged to have U.S. Sen. Amy Klobuchar (D-Minn.), as the speaker for the return of our annual Fall Gala.  She spoke about the fight for our democracy and ensuring all Americans can exercise their right to vote,” said CCDWLI Chair and co-founder, Michele Vaughn.

Vaughn continued, The “senator recently introduced the Freedom to Vote Act, which was created to set national standards so that all Americans can vote however is most convenient, no matter what zip code they call home. This includes things like the ability to request a mail-in ballot, being able to register to vote on Election Day, and having at least two weeks of early voting. Senator Klobuchar is again looking out for the working community and believes that no one should have to decide between earning a day’s wages and casting their vote. This bill makes voting more accessible to those with variable schedules, and those who have to work more than one job to make ends meet.”

Klobuchar was chosen as a speaker by the CCDWLI because of her long history advocating for the issues that matter to women and working families. The senator’s first experience with public policy followed the birth of her daughter, Abigail, where she was the lead advocate for a law guaranteeing new moms and their babies a 48-hour hospital stay. 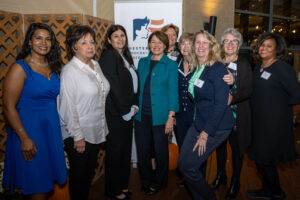 In addition to her strong leadership on the fight to protect the right of all Americans to vote, and to make voting more accessible, Klobuchar remains focused on working family communities. She has a reputation for being consumer driven and has worked with both Democratic and Republican leaders to support small business communities, fight human trafficking, address the opioid epidemic, and protect consumers.

The CCDWLI’s goal is to recognize women as the leaders they are at every level, and to support and encourage those who are willing to stand up and fight on the issues that matter to women and families.

Vaugn concluded, “Our hope is that U.S. Sen. Amy Klobuchar’s experience will inspire current and future leaders, particularly women leaders, here in our community to stand up and make a difference on the issues about which they feel most passionately.”

The CCDWLI, founded in 2015, is a chapter of the Pennsylvania Federation of Democratic Women (PFDW).  In a short time, the CCDWLI has established a proven track record of success and has quickly become the state’s largest PFDW chapter in Pennsylvania