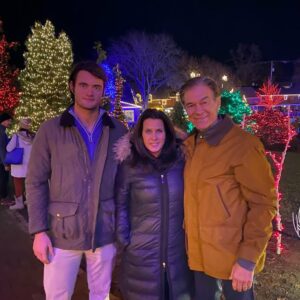 Dr. Mehmet Oz and his family at a recent event in New Hope.
News

Dr. Oz is off Facebook, and he says it’s censorship.

A case in point is the New York Post’s bombshell report about Hunter Biden’s salacious laptop, which was suppressed by Twitter before the Nov. 2020 presidential election. Later, Twitter CEO Jack Dorsey admitted the social media company should not have censored that article, but the damage was done. Facebook also put restrictions on the news article, whose accuracy has never been challenged or disproven.

Now, as celebrity Dr. Mehmet Oz enters the 2022 Republican race for the Pennsylvania Senate seat being vacated by GOP Sen. Pat Toomey, he is accusing Facebook of returning to its old tricks.

“I just got some disturbing news,” Oz said in a press release on Tuesday. “Facebook has restricted my account – and is not letting me advertise to you. It could hurt the momentum that we’ve been building with this campaign. Now, we’ve asked them what’s going on and they say they’re looking into it, but it’s been more than 24 hours. I need to get my conservative messages out. They matter.

“I don’t want big tech putting their thumb on the scale to shift the balance of power here,” said Oz. “You need to learn about strong families and how to protect your individual freedoms. We’re not going to be canceled. We won’t be censored. We won’t be shut down.”

Oz spokeesman Casey Contres said, “Big Tech and the political establishment are trying to stop Dr. Oz’s campaign to empower Pennsylvanians, but it is not going to work. We are seeing incredible energy and enthusiasm at every stop and that will only continue to grow.”