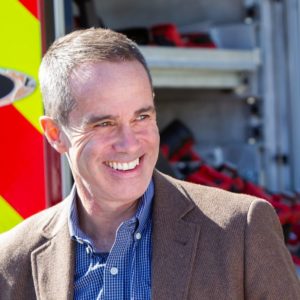 Sen. Santarsiero: The Way Forward Starts with the Truth

While shocking, the events of January 6, 2021 were hardly surprising. Leaving aside Donald Trump’s often abhorrent behavior over the four years of his presidency, his actions in just the last few months were a strong signal of what was to come.

At the first presidential debate last fall, he refused to commit to an orderly transition of power should he lose and requested that neo-fascist groups like the Proud Boys “stand by” if needed. Then, in the days after the election when his initial lead in six critical swing states began to evaporate as mail-in ballots – which were cast in historically high numbers due to the pandemic – were counted, he began to propagate the big lie that the election had been stolen from him without offering any evidence to support that outrageous claim. In response, his supporters in those states began to demonstrate at vote counting locations in an attempt to intimidate the public servants working inside.

Then came January 6, the day that Congress was to certify the election of Joe Biden as president. That morning at a planned rally near the White House, Trump and others in his coterie of enablers, incited the crowd to march on the Capitol to “stop the steal.” And march they did, ultimately breaking into the building and attacking police and those inside while committing other acts of violence, all intended to intimidate members of Congress into abandoning their constitutional duty to declare Mr. Biden the winner of the presidential election.

Thankfully, the insurrection failed. Congress did its duty, and at noon on January 20, Joe Biden will be sworn in as president of the United States.

But that, unfortunately, is not the end of the story. Our democracy has suffered an unprecedented attack. Lines have been crossed and norms of behavior have been shattered. A sizable segment of the population will not accept the fact that Donald Trump lost the election.

How do we recover from this?

To begin, those who ransacked the Capitol and threatened Congress must be arrested and charged with treason.  Those who incited the violence must be similarly charged, including the president. Moreover, the president needs to be removed from office, no matter how little time remains on his term.  He has demonstrated beyond any doubt that he is unfit to serve even another day and poses an immediate danger to our democracy.

Then, in the words of Senator Mitt Romney, leaders of the Republican Party need to start telling the truth, something they have avoided for far too long as part of a cynical calculation that they could weather the Trump storm while maintaining their hold on power.

They should begin by acknowledging, without qualification, that Trump lost a free and fair election.

Next, they need to speak out against any attempt to draw a false equivalency between what happened on January 6 and the looting and violence of rioters who appeared among the peaceful protesters in the wake of the murder of George Floyd.

To be clear, in a democracy violence is never justified. Those who used the cover of peaceful demonstrations against a grave injustice as an opportunity to loot stores, damage property, and attack police committed crimes for which they should be arrested and tried.

But as reprehensible as those crimes were, they did not rise to the level of the events of January 6 and cannot be offered now in a perverse attempt to minimize the danger those events have created. The attack that day was not only an attack on police, property, and innocent people, but an attack on our constitutional democracy. It was an attempt to seize power by the use of force, evoking images of a burning German Reichstag in 1933. It was an act never before seen in the history of our county, and now we must do more than hope that it will never be seen again.

That is why holding to account those who committed and incited the attack of January 6 is so important. And that is why Republican leaders must at long last tell the truth and not feed into attempts to minimize the gravity of this moment.

We will have a new president on January 20. But the damage caused by what was done on January 6, in the weeks after November’s election and, in a very real sense, over the last four years, will still be with us. Repairing that damage is in the interests of all Americans. It starts with the truth.