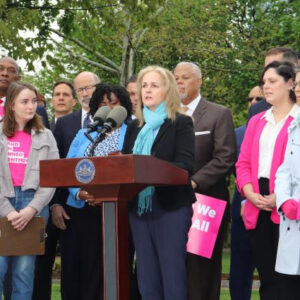 No matter your views on abortion, today is a day when the U.S. Supreme Court changed history with its Dobbs ruling. And political leaders from Delaware Valley and in races for state office are speaking out about what the historic decision means for Pennsylvania.

Democratic gubernatorial candidate Josh Shapiro tweeted: “This is a devastating day in America. A woman’s right to choose now depends on the state in which she lives, and the decision will be made by our next Governor. Doug Mastriano will ban abortion with no exceptions. I will keep abortion legal.”

Writing as attorney general, Shapiro also sent this email: “The Dobbs decision will go down as a shameful moment for our country and for the Court. Today, five Supreme Court Justices upended fifty years of settled law and subjected the health and private lives of millions of American women to the whims of politicians. As a result of today’s decision, every American’s personal freedoms now depend on the state in which they live. Here in Pennsylvania, decisions about your bodies will now be left to elected officials in Harrisburg– giving those politicians more power than women in our commonwealth.”

State Sen. Doug Mastriano, the Republican candidate for governor, told the Delaware Valley Journal, “Roe v. Wade is rightly relegated to the ash heap of history. As the abortion debate returns to the states, Pennsylvania must be prepared to lead the nation in being a voice for the voiceless.

“While this decision by the U.S. Supreme Court is a triumph for innocent life, it must not take our focus away from the key issues facing Pennsylvania families.

“Pennsylvanians will not be distracted by the hysterics of the left as they exploit this ruling to try to fulfill their far-left agenda,” Mastriano continued, “as they struggle with all-time record-high inflation, the price of gas and groceries, as well as out-of-control crime and good-paying jobs – which is exactly why I will prioritize these issues as their governor,” Mastriano said.

Republican U.S. Senate candidate Dr. Memhet Oz tweeted: “The Supreme Court’s decision to overturn Roe v. Wade is to many considered controversial. I respect those with a different view, but as a heart surgeon I’ve held the smallest of human hearts in the palm of my hand, and I will defend the sanctity of life. I am relieved that protecting the lives of America’s unborn children will once again be decided by the people through their elected representatives. As we lift up life, we must focus on the needs of mothers and children, for whom this decision can be the greatest gift of all.”

Lt. Gov. John Fetterman, a Democrat running for Senate, tweeted, “In Pennsylvania, the Governor’s pen will either protect abortion rights or eliminate them. The stakes can’t be any higher. We MUST elect @JoshShapiroPA He has been an absolute advocate of protecting abortion rights here in Pennsylvania. There is too much on the line.”

And in a statement, Fetterman said, “Deciding how and when to become a mother is a decision that should always be made by a woman and her doctor—not politicians. If there were any doubts left about what’s at stake in this race, it became crystal clear today. The right to an abortion will be on the ballot this November in Pennsylvania.  I will protect abortion rights. Dr. Oz will take them away. It’s that simple.”

How will the decision impact November’s election?

“I think the Supreme Court decision overturning Roe and Casey will undoubtedly become an important part of the fall campaign messaging,” said Berwood A. Yost, director of the Floyd Institute for Public Policy and the Center for Opinion Research at Franklin & Marshall College. “The abortion decision will be a catalyst for some voters, as will the recent decision on guns. In fact, the 2022 midterms are going to have many things for voters to think about, including their feelings about the economy, the direction of the state, and the state’s electoral procedures to name just a few others.

“The most important result of the recent Supreme Court decisions, from a political standpoint, is that they give Democratic candidates something to talk about other than the economy and the president’s performance in office, which most voters don’t feel good about,” said Yost. “It allows them to motivate their base voters and perhaps remind those with weak party attachments about what the consequences of their choice, or failure to choose, might be.”

Christopher P. Borick, political science professor and director of the Muhlenberg College Institute of Public Opinion, said the Supreme Court’s decision could be very important for the Pennsylvania governor’s race.

“The electoral implications of the SCOTUS decision are more significant in Pennsylvania than in almost any other state, with the outcome of the governor’s race determining where Pennsylvania policy on reproductive matters goes,” he said. “With chances good that the legislature remains in GOP control, a Mastriano victory would open the door for major reproductive rights restrictions in the state, while a Shaprio win would stop these types of measures as he would be able to use the governor’s veto power.
“In this election cycle where Democratic voters are not very energized, today’s Supreme Court decision does offer an energy source for Democrats who might not be engaged in the midterms,” Borick added.  “I’m skeptical that the energy generated by the court’s decision to overturn Roe will completely counter the cyclical advantages the GOP has, but along with some favorable candidate matchups, and a boost from the SCOTUS decision, the Democrat’s statewide chances have improved from where they were before the May primary.”

Other elected officials also weighed in.

“Today’s decision upends almost a half-century of legal precedent and rips away a constitutional right that generations of women have known their entire lives. This dangerous ruling won’t end abortions in this country, but it will put women’s lives at risk,” said U.S. Sen. Bob Casey (D-Pa.) via Twitter.

And U.S. Sen. Pat Toomey (R-Pa.) tweeted, “The U.S. Supreme Court’s ruling on Dobbs v. Jackson Women’s Health Organization restores the American people’s ability to determine abortion laws through their elected representatives, as the Constitution requires. Precedents that are wrongly decided should be overturned, just as Brown v. Board of Education was right to overturn Plessy v. Ferguson. This ruling is a win for the unborn, the Constitution, and democratic governance.”

“I was 13 when Roe became law of the land. 50 years later an extreme right-wing court has now ended the constitutional right to abortion – politicians can now control a women’s body. I have tears of anger — girls like my 10-year-old granddaughter have less rights than me at 13,” tweeted U.S. Rep. Madeleine Dean (D-Montgomery).

Congresswoman Mary Gay Scanlon (D-Delaware/Philadelphia) called the decision “unprecedented” and said it “will have a devastating impact across our country. It is rare in the United States for millions of Americans to wake up with fewer rights than they had the day before, but that is precisely what the court has done here.”

She went on to call it “misguided” and “dangerous.”

U.S. Rep. Chrissy Houlahan (D-Chester/Berks) tweeted: “In less than 24 hours, the SCOTUS has ruled that states do NOT have the right to enact measures to protect from gun violence but simultaneously DO have the right to restrict a woman’s right to choose. This isn’t about state’s rights—it’s about advancing a political agenda.”

Congressman Brian Fitzpatrick (R-Bucks) said, “As state legislatures across America begin to consider legislation on this extremely sensitive topic in response to today’s Supreme Court decision in Dobbs, I urge all state legislatures to always start from a place of empathy and compassion. Any legislative consideration must start with the process of seeing the world through other people’s eyes, and walking the world in other people’s shoes.

“Any legislative consideration must always seek to achieve bipartisan consensus that both respects a woman’s privacy and autonomy, and also respects the sanctity of human life. These principles are not mutually exclusive; both can and must be achieved…At the core of our democracy must always be the goal of building bridges, not driving wedges.”