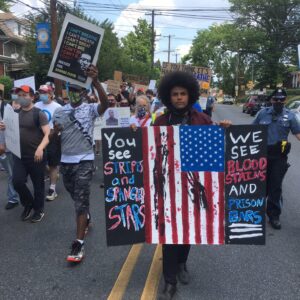 When Republican challenger David Galluch called her out for marching with ‘Defund the Police’ advocates in a Black Lives Matter event, Rep. Mary Gay Scanlon (D-Delaware/Montgomery/Philadelphia) did not back down.

“I have marched, however, in vigils and protests of the murder of George Floyd,” Scanlon said. “I think the more pertinent question is, where were you?”

“Marching behind a bloody American sign flag that says ‘You see stars and stripes we see prison bars’– that doesn’t send the right message on the 4th of July,” Galluch shot back.

That was just one of the several fiery exchanges between the two candidates during a forum hosted by the League of Women Voters on Monday. 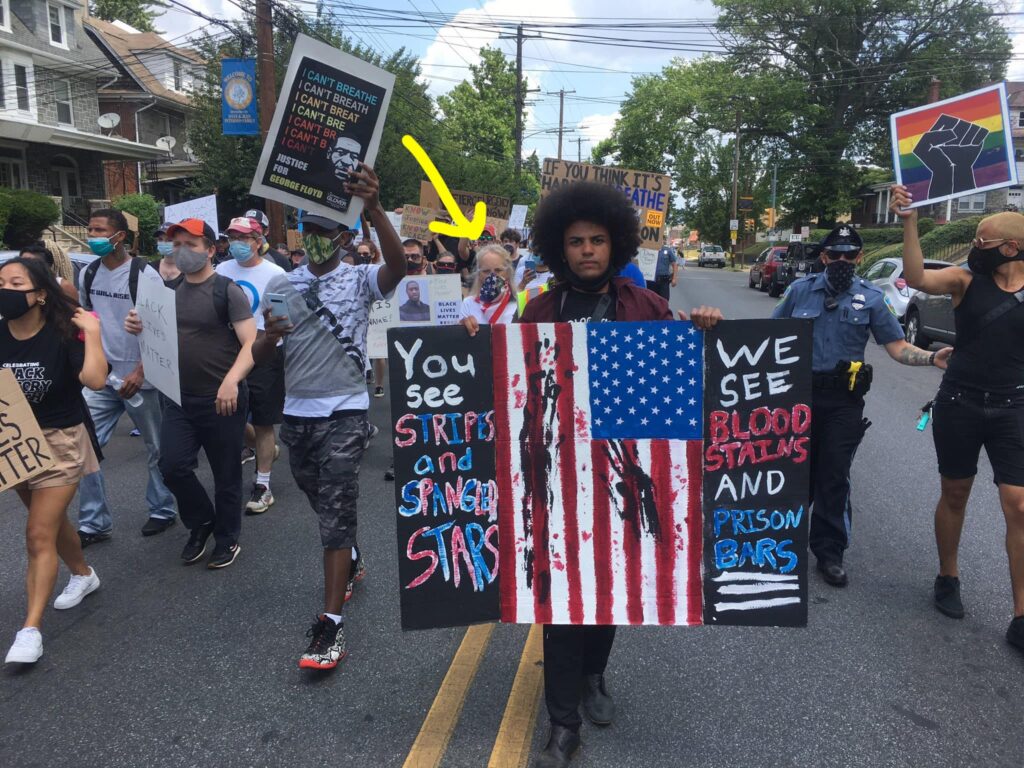 Galluch scored points on skyrocketing inflation and rising crime while Scanlon touted her experience in Congress, as a lawyer, and as former school board president.

Scanlon, first elected in 2018, said she was a volunteer for more than 30 years before running for Congress and had represented people who could not afford a lawyer.

She said she voted to reduce the cost of prescription drugs and passed the “first infrastructure and gun violence bill in decades.”

Galluch said he grew up with a single mother, went to the U.S. Naval Academy, graduated sixth in his class, and volunteered to defuse bombs, which he called “the best choice I ever made in my life.”

“Our leaders have failed us. We’re facing inflation. We’re facing historic crime increases. We need change and we need a new direction. I would like to bring a new bipartisan approach, a collective rebirth in the American spirit,” he said.

“In the 30,000 doors that I knocked on many people say, ‘I don’t know my congresswoman,’” Galluch said. He noted that a bridge in Ridley Park has been closed for repairs for eight years. “It’s choking off access to the business district.”

Scanlon said she knows about the bridge and is working with local and state officials to fix it fixed. “It’s a complicated process,” she said. 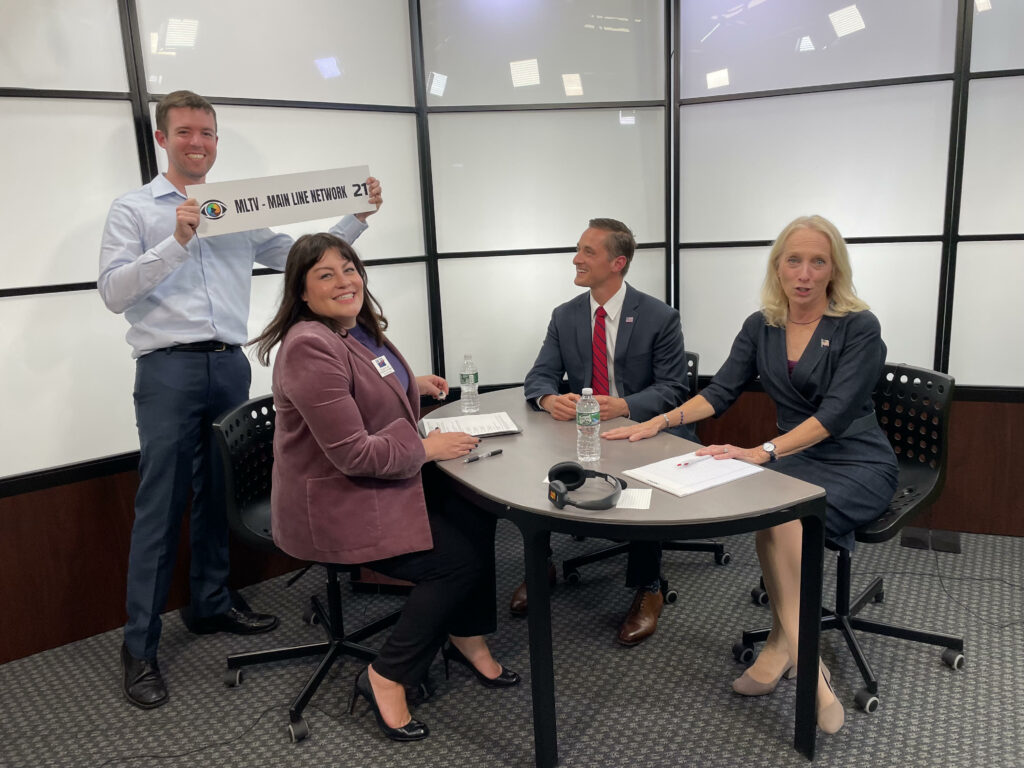 Moderator Jane Mogil mentioned rising crime, with more than 1,000 carjackings in Philadelphia this year, and that Scanlon was a carjacking victim.

Scanlon attempted to shift blame by labeling crime a national problem and suggesting lax gun laws are responsible — though states with less restrictive gun laws have lower crime rates than Pennsylvania. She also highlighted her vote for a bill to ban lawful gun owners from purchasing what she described as “assault weapons,” a category that includes some of the most commonly owned rifles in Pennsylvania. “Unfortunately, with the Senate filibuster, that hasn’t gone through the Senate,” Scanlon said.

Galluch opposes the gun ban and called out Scanlon’s participation in a march that included “Defund the Police” activists.

Then the Republican brought up Scanlan’s participation in a march

“Scanlon marched with ‘Defund the Police’ on the 4th of July behind a bloody American flag sign. She has endorsed out-of-the-mainstream policies like eliminating cash bail and she has stood with DA Larry Krasner” when (Krasner) said, ‘We do not believe just arresting people for guns is a viable strategy to reduce shootings.’”

Scanlon denied she advocated for defunding the police.

“I have marched, however, in vigils and protests of the murder of George Floyd,” said Scanlon. “I think the more pertinent question is, where were you?”

“Marching behind a bloody American sign flag that says ‘You see stars and stripes we see prison bars’– that doesn’t send the right message on the 4th of July,” Galluch responded.

Scanlon said that event was organized by the Collingdale mayor and “faith leaders,” and she suggested the photo was being used as a political smear against her. “The photo was shared by dark money groups supporting your campaign and cropped out the police officers marching with us,” she said.

In fact, the photo is prominently displayed on Scanlan’s Facebook page.

“I don’t think it makes sense for us to be having a conversation about having new laws if we’re not enforcing the laws we have on the books,” said Galluch.

“Congresswoman Scanlon has been silent on this. Philadelphia is not enforcing the laws on the books, and that crime is not only leading to spikes in violence. Two hundred children under 18 have been killed in Philadelphia this year. That’s a shame. That’s unacceptable.”

Scanlon said she had been “working on gun safety for more than 20 years” and voted on legislation to “stop the flood of guns on our streets,” including ghost guns and AK-47s.

“Unfortunately, our Republican colleagues back the gun lobby instead of children’s health,” Scanlon said. She has worked with Delaware County’s district attorney on a program that reduced gun violence in the city of Chester by 40 percent, she said.

“We need a Senate that will actually support the laws our population wants, and for that reason, we need to get rid of the filibuster,” said Scanlon.

Galluch said, “Congresswoman, since you’ve been in office, Philadelphia has set a new record for murders every year. In 2019, we had two murders in Upper Darby. In 2021, we had 21 murders in Upper Darby. Since you have been in office, and since Larry Krasner has been in office, murders and gun violence have been exploding. You’ve failed to control this violence, you’ve failed to support our police, and you’ve failed to demand that we have the commonsense enforcement of laws like if you’re a felon, you go away the first time if you’re caught with a firearm. Why would you not call out Larry Krasner for his position?”

“I’ve worked with folks with disabilities and seniors for decades to be sure they have what they need,” she said. “We can’t just go cutting those funds willy-nilly. I’ve sponsored legislation to protect social security and make sure it continues well into the future.”

Galluch said his mother can’t survive without Social Security and pledged to support those programs.

He said Scanlon was referring to a study, not an official plan endorsed by the Republican Party.

“Inflation is the greatest threat to our seniors,” he said. “It erodes the value of their Social Security. We’ve seen what inflation has done to their 401ks and their hard-earned savings.  I think the best way to care for our seniors and people on a fixed income is to get the cost of essentials down, the cost of gas down, the cost of groceries down.”

“If there was a silver bullet, I am quite sure we would do it,” Scanlon said.