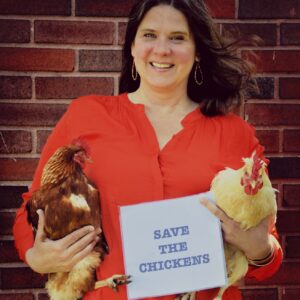 Save the Chickens: Pottstown Borough’s “Chicken Lady” Hopes for Change

When it comes to breakfast, Katie Scanlan doesn’t suffer from COVID-19 supply chain problems. She just walks out the backdoor of her Pottstown home and collects a few eggs from her chickens.

During the pandemic lockdown that seemed like smart thinking. Unfortunately, in this small Montgomery County community, it’s also illegal.

When COVID-19 shut down the country, everyone was looking for a way to provide for their families. The uncertainty of when businesses would reopen made many people concerned about their food supply.

Scanlan sat down with Delaware Valley Journal to discuss how she started raising her chickens, the citations she’s received from the borough, and her hopes for the future.

“I was a Girl Scout for many many years, and then I was a Girl Scout leader,” Scanlan explained. “When the pandemic started, the week or so before the lockdown, my uncle suddenly passed away. At his funeral, we heard things were going to start shutting down. So we went right from the funeral to the grocery store to stock up, thinking we might not be able to leave the house for a little while. And when we did that, it really kind of triggered the Girl Scout in me to think survival mode and how will I feed my family?”

What started as a strategy to deal with COVID-19 disruptions developed into a positive experience for Scanlan and her entire family.

“Really, it was just for self-preservation purposes at that point,” said Scanlan, when asked about how the chickens started. “And it turned out to be a wonderful exploration of how this could work very well in a small urban or suburban situation. So, we set up a coop for them and we started very small. We raised them inside and then we moved them to the garage when the weather got a little bit warmer. And then we moved them from the garage into this coop that we had purchased. We did a whole thing with a chronology of pictures and events and whatever just so we could use it as a learning topic.”

Scanlan has two master’s degrees, one in education, and she saw this as a teaching moment for local schools.

“My thought as we were moving through,” Scanlan recalls, “was, I’m so involved with the local schools and sustainability effort that this would be really cool to get a grant from the Health and Wellness Foundation to put a webcam in the coop so kids could log in anytime and see what the birds were doing.”

Unfortunately for Scanlan, she learned afterward that backyard chickens were illegal in Pottstown. It’s an ordinance that hasn’t changed since 2009. When Scanlan received the first citation for her backyard chickens, she mentioned it wasn’t until after she’d decided to get the ordinance changed.

“Right around the time that I went to my borough council person and asked him for his support in trying to update the ordinance,” recalled Scanlan. “Because I realized then that chickens were illegal. And I thought that’s ridiculous and that’s a very outdated notion. Especially in this day and age when people need to have more of a connection with where their food comes from. I was on the Environmental Advisory Board for the borough and I thought this tied in very well with our sustainability plans.” 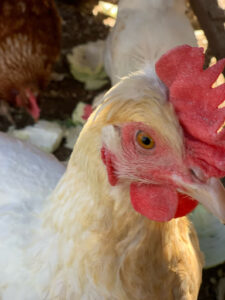 Despite the good intentions Scanlan has for her chickens, the borough hasn’t changed its ordinance.

“They gave me a citation,” Scanlan said. “They told me I didn’t have to take action on it immediately because there was a borough council meeting and they were going to allow me to present a proposal for how we might revise the ordinance. And so I was told, this was in October or November of last year, ‘You don’t really need to do anything until the spring and you’ll have time to provide a presentation. So I provided the presentation and immediately following the presentation, I got an official citation in the mail and a $500 fine.”

Scanlan was willing to work with the borough and even rehomed some of her chickens to keep the peace.

“I have six [chickens] at present. I had nine, one was a rooster. So, I gave him away three days after finding out he was a rooster. And then the other two, when the borough gave me the previous citation, I was trying to slim down my flock, so that it was a little more acceptable to them and try to demonstrate an act of goodwill.”

Ultimately, the citation was dismissed because it was written for the wrong district. Though the judge threw out that citation, Scanlan explained they could fine her again at any time, which they did.

“The codes department man, Charlie Weller, as we’re walking out of the court, he said ‘I have to tell you, they’re going to make me fine you again. And from what I understand, I can fine you up to $1,000 three times a day.’”

After dropping off paperwork to inform the borough that the chickens are emotional support animals, Scanlan received another $500 fine from the correct jurisdiction.

Scanlan hopes that by bringing more awareness to the benefits of these chickens, officials will change the ordinance.

“They’re for emotional companionship and they really are, at this point, beloved pets. They’re more family members than anything and they give us eggs too, which is lovely,” she said.

And she may ultimately get her wish, too. According to published reports, Pottstown is considering a pilot program for raising chickens in community gardens.