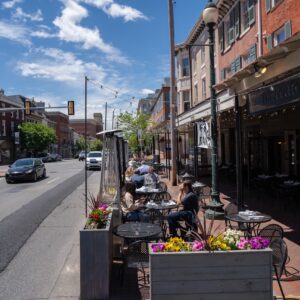 When I decided to run for Mayor of West Chester, I did not expect to win.  Most Libertarians and other smaller parties have an uphill battle in our two-party-dominated system.

My goal was to raise awareness and to give voters a viable alternative. Later, I started to think that our campaign might be competitive. My enthusiasm grew each day I went out door-knocking, talking to potential voters. Many expressed dissatisfaction with the current borough politics and responded favorably to the ideas in my platform. They were enthusiastic about supporting positive change and a localized, community approach to government. The fact that I had a solid platform with concrete plans to implement quickly also helped.

The League of Women’s Voters hosted a debate for the three mayoral candidates. This was an exciting — and rare — experience for most Borough residents made even more rare by having third-party participation. The debate exceeded my expectations. It was fun, challenging, thought-provoking, and an opportunity to share my platform.  The feedback from voters, friends, and neighbors was outstanding. They appreciated the amount of research I conducted in preparation for the debate and my candidacy. Afterward, I was pleased to find several borough council members expressing their support for my candidacy following the debate.

While our campaign team became increasingly optimistic about the possibility of a Libertarian win, other groups in the borough must have also sensed a shift in the momentum.  The negativity began.

Before the debate, I experienced mostly positive feedback both in person and through social media.  Now things started to become heated, and even some of my long-time neighbors transitioned from friendship to politics. This was disappointing because I had made a commitment to run an upbeat campaign that focused on issues and solutions.  Our campaign never criticized other candidates. Instead, we focused on our policy issues.  Unfortunately, we were not always granted the same courtesy.

In the end, my biggest disappointment was not losing the election. Instead, it was the lack of decorum and professionalism from some members of our community.  I was always happy to talk with anyone about my views on issues, even when we disagreed, but civil discourse seems to be a lost art.  It was distressing to see people impacted by peer pressure and social media blindly take sides and reject not only opposing views but the person expressing them.

This lack of civil discourse led me to ask, “when was the turning point?”  It was once acceptable and even encouraged for friends and neighbors to discuss politics in a spirited but respectful way. People were willing to share their perspectives without fear of repercussions or losing friendships.  It was ok to “agree to disagree” and remain friends.

Today, however, that does not generally seem to be the case.  This has been occurring nationally for a while, yet I was still surprised to discover this behavior in our own community. I am thankful for so many wonderful aspects of the campaign. I met incredible residents who appreciated the issues we raised. I have been overwhelmed by cards, notes, flowers, and thank-you notes for doing what I believe is right. On reflection, I will focus on the positive aspects of the experience and will continue to work hard to bring our community together and model civil discourse.  Maybe others will follow this example and grow to understand that our different perspectives actually make our community stronger.

A politician once wrote about this problem. “I never considered a difference of opinion in politics, in religion, in philosophy, as cause for withdrawing from a friend… I never deserted a friend because he had taken an opposite side… the fever is abating, and doubtless some of them will correct the momentary wanderings of their heart and return again.” This quote is from a letter written in 1800 by a politician named Thomas Jefferson. West Chester Borough residents and the entire nation could benefit from these words written over 200 years ago.