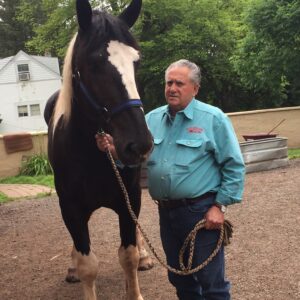 Mike Marino with a horse from the New Holland Sales Stable.
News

Mike Marino was near the end of his term as the Montgomery County district attorney when he had the idea to open a riding stable as a way to keep busy after leaving office. And the name for the stable, “Red Buffalo Ranch,” came to him in a dream, he said in a recent interview with the Delaware Valley Journal.

He had no idea the riding stable–which offers trail rides, lessons, and a summer camp for kids–would become so successful when he opened it in 1998.

“The saying goes, ‘If you build it they will come,’” he said. And although it was shut down for three weeks last year during the pandemic, once Gov. Tom Wolf re-opened parks the stable, which abuts Evansburg State Park, was back in business.

“Because you’re on a horse, you’re socially distant so people could ride without the mask on and still be compliant,” he said. “Well, people started coming out of the woodwork because people wanted to get away, to get out and our business doubled.”

Marino, 79, who grew up as a city kid in Norristown, didn’t know much about horses when he got his first steed in 1970. He was an assistant district attorney then making $7,500 a year and his mother asked him if he could afford the horse.

“And I said, ‘No, but I’m going to buy him anyway,’ and that was my lucky horse,” said Marino. “Because of that horse, I ended up here, with property. It was a very fortuitous horse.”

He named his new mount Castagna, which is Spanish for chestnut. Later, he learned the horse was actually a bay. He bought Castagna for $300 from a friend who lived in Plymouth Meeting and rode him all the way to Skippack, which was about 24 miles, since he did not own a horse trailer. But he had nowhere to keep the horse. So he stopped at a farmhouse near his home and asked if he could board the horse there. The farmer, George Smith, agreed, charging him $20 a month.

Marino and the Smiths became friends. Once, when some dogs killed the Smiths’ sheep, Marino bought them two new sheep so they could rebuild their herd. He ferried the livestock in the backseat of his car.

And when the couple retired they sold Marino 11 acres, fronting the loan and not charging interest. He continued to buy property in the Skippack area, including the land where the stable is now.

Marino took his love of horses to the extreme, becoming involved in endurance riding. He believes Arabians are the best breed for that sport, which requires riders and their mounts to race for 100 miles cross country. When he was 45, Marino won a gold medal in Germany with the U.S. Endurance Team on his Arabian gelding, Sunwalt. 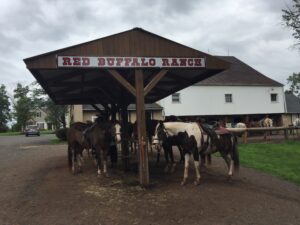 The stable was originally a barn for cows and it was “an absolute wreck.” Marino fixed it up over time. The ceiling of what is now the tack room was too low so instead of raising it, he dug down two feet to lower the floor, using a pickax.  He hired a young man for the job who told Marino he was on probation for drug charges.

“I said, ‘Do you know who I am? I probably put you in jail,’” Marino said. The guy worked for him for a couple of weeks, but one day he didn’t show up. Marino later found out his worker had died of a drug overdose.

Marino has a kitchen next to the stable that he dubbed the “Roadkill Cafe.” Every Saturday and Sunday morning he cooks breakfast for the crew of 28 part-time guides and stable hands who tend the herd of 30 or so horses at the Red Buffalo Ranch. Except for two young men, the workers are young women in high school or college. 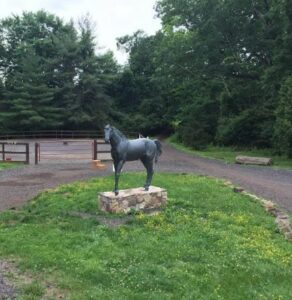 Over the years, his employees have become like family to him. They keep in touch after leaving the Red Buffalo. His two sons are grown now. Drew Marino is a county detective and Mark Marino owns a bar, the Duck Inn Taproom in Collegeville.

One worker, Daryl Downs, who first came to the stable to take lessons when he was 12 years old, followed Marino into endurance riding.

“He won the Old Dominion 100, which in my opinion, is the hardest 100-mile race in the world. He was 18,” Marino said. Downs rode Cincinnati, a horse that Marino bought for $700 at auction and named for Ulysses S. Grant’s famous steed.

After his stint as district attorney, Marino, a Republican, was elected county commissioner, a position that he did not enjoy nearly as much as being D.A.

“Being the D.A. was the best job I ever had,” Marino said. “Without a doubt.”

However, he is proud that he oversaw the construction of the Perkiomen Trail while a commissioner.  The Michael D. Marino equestrian campground at the end of the trail in Green Lane bears his name.