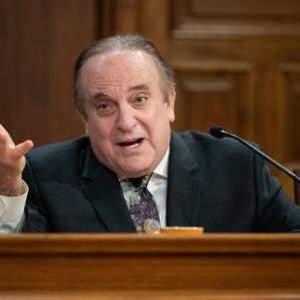 State Sen. Andrew Dinniman (D-Chester) voted in favor of a bill that would have kept Pennsylvania out of a regional cap and trade carbon scheme, but then later went against the same bill during a vote of the full senate.

The Republican-sponsored legislation aims to prevent Gov. Wolf from unilaterally placing Pennsylvania in the Regional Greenhouse Gas Initiative (RGGI), which would put the state’s energy producers in a carbon cap-and-trade program along with a handful of other mid-Atlantic and New England states. They argue the move would both drive up the price of energy and make it harder to create energy-sector jobs in the Keystone State.

The bill has passed both chambers in the General Assembly and drew the support of five senate Democrats, but Wolf has promised a veto.

Dinniman voted “yes” in committee, only to try and torpedo the measure later.

“I have gone through what I would claim are the horrors of the pipeline through our area,” he said when casting the first of the two votes. “I have not found the governor or the Department of Environmental Protection (DEP) to be responsive.”

Dinniman is a long-standing opponent of the Mariner East Pipeline in general, but was also referring to a recent construction accident in which non-toxic mud was escaped through a highly pressurized crack in the earth and reach the lake in Marsh Creek State Park.

As for the reasoning behind the divergent votes, Dinniman’s office did not return a request for comment.

A spokesman for a pro-pipeline association offered his theory, however.

“Sen. Dinniman abandoned his Democratic colleagues and did what he does best — grandstand against Mariner East,” said Kurt Knaus, spokesman for the Pennsylvania Energy Infrastructure Alliance. “Clearly, the committee vote wasn’t important to him. The only thing that mattered was taking a pot shot against a legally permitted pipeline that employs thousands and benefits the entire commonwealth.”

RGGI appeared to be shelved once the pandemic overtook all priorities, but now Gov. Wolf is fulfilling a vow he made in 2019 to push the state in the regional compact, even if he does so without the support of the legislature.

Wolf and supporters say the measure is necessary to combat climate change.

Energy producers in the RGGI states would be granted an annual allotment of greenhouse gasses it could emit. The producers would then have to buy credits if they go over the allotment, and the monies for the credits go to carbon reduction measures. The allotments would also be ratcheted down over time, driving the price — and the cost to energy consumers — higher.

But critics of the plan say it doesn’t work.

An analysis by the libertarian-leaning think tank Cato Institute found “no added emissions reductions or associated health benefits from the RGGI program” and “spending of RGGI revenue on energy efficiency, wind, solar power, and low-income fuel assistance had minimal impact.”

Critics also contend the measure will drive up energy prices which not only make a family’s home electric bills more costly, but also increases the baseline costs for manufacturers and businesses, costs which get passed on to consumers.

On Tuesday, the state Environmental Quality Board voted to begin the formal process of rulemaking for the initiative, another step for RGGI’s possible implementation in Pennsylvania.