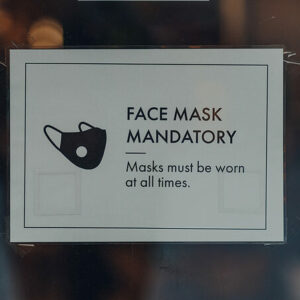 As Yogi Berra said, “It’s like déjà vu all over again.”

Beginning April 18, Philadelphia is reimposing its mask mandate–the first major city to take this step. People who are indoors in a public place must wear a mask. The order is due to increased COVID 19 cases, although hospitalization rates remain low.

In support of its mandate, the city Health Department said there are an average of 142 new cases per day, while on April 1 the average was 84 cases. However, hospitalizations are essentially unchanged, with 44 on Monday and 43 on April 1.

Philadelphia’s announcement comes as even Dr. Anthony Fauci conceded the era of government-mandated mitigation as an effective strategy is over.

“It’s going to be a person’s decision about the individual risks they’re going to take,” Fauci told “This Week” co-anchor Jonathan Karl on Sunday.

Pennsylvania Attorney General Josh Shapiro, the likely Democratic nominee for governor, also went out of his way to call the move “counterproductive.”

“Look, that’s a decision that the mayor made, I certainly didn’t make it,” Shapiro said Monday after the news broke. “And I’m not a supporter of these mandates. What I’m a supporter of is educating and empowering the public so that they can make responsible decisions. But I think those kinds of mandates are counterproductive, particularly at this time.”

Delaware Valley residents who spoke to DVJournal were unhappy with the city’s decision.

“We are extremely disappointed to hear that the city plans to mandate that masks be required when dining indoors without any input from the mitigated community,” said Ben Fileccia, senior director of operations for the Pennsylvania Restaurant & Lodging Association. “Restaurant workers have suffered severe backlash when enforcing these rules in the past and, unfortunately, this time will be no different.

“This announcement is a major blow to thousands of small businesses and other operators in the city who were hoping this spring would be the start of recovery,” he added. “While the rest of the commonwealth has moved forward navigating life with COVID, Philadelphia has stepped back by imposing another mandate and expecting it to be enforced by businesses and their employees.”

Shannon Grady, a Downington Area School District parent who filed a petition to remove school board members over the mask mandate, said she is concerned.

“This is exactly why I and other parents are still pursuing the cases against the mask mandates.  The schools have tried to use the fact that we are currently ‘mask optional’ as their responses or objections to the petitions filed against them, claiming that the cases are ‘moot,’ but we point out the schools still have a health and safety that includes ‘a universal and correct wearing of masks’ policy.” Grady said.

The latest research has raised questions about how effective masks are at stopping the spread of COVID-19.

“FFP3 [filtering face piece] masks could reduce the number of infections among healthcare workers caring for patients with COVID-19,” said Dr. Robert Sklaroff, a Philadelphia oncologist. “Otherwise, data supporting the efficacy of various face masks and respirators in preventing infection have been inconsistent. Unless masks are properly fitted and changed regularly, their only impact is psychological.

Several DVJournal readers took to Facebook to express their dismay, and some suggested the mandate will keep them from traveling into the city.

“I do not plan to go into Philadelphia for the next five years,” said Elliott Hirsh of Wyncote.

“Ridiculous,” said Ted Taylor of Doylestown. The “only city in the country with such a mandate. I won’t be going to Philadelphia any time soon.”

Elkins Park resident Helaine Dubner Zlotnick said, “Disappointing. Requiring masks again will hurt local businesses once again. (And) if extended to Philly schools, the children will suffer socially and physically. Sitting in a public Philly school without air conditioning is a disaster waiting to happen.”