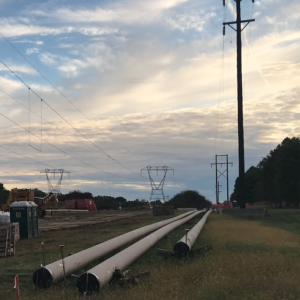 Environmentalists opposed to the Mariner East pipeline project celebrated a recent ruling ordering part of the construction in Chester County to be rerouted. But it may be a case of “be careful what you wish for.”

Engineers, experts and union leaders tell Delaware Valley Journal that rerouting will actually cause a ripple effect, creating new and unintended consequences for area residents on a project that is nearly completed.

“While work was progressing, we could finally see the end of the line with construction,” said Jim Snell with Steamfitters Local 420. “Now, with the potential of forcing the company to find an entirely new route for a very small section, we’re looking at many more months of disruption in our communities and longer delays before we can finally put this energy infrastructure to work for Pennsylvania.”

Illustrating just how close the pipeline was to completion, an industry report from 2018 noted that “mainline construction is 99 percent complete and 98 percent of the horizontal directional drills are complete or in progress.”

Officials with knowledge of the construction told Delaware Valley Journal that the route just abandoned went along a path that already included easements for other utilities — such as electricity lines — meaning the right-of-way was already in hand or was easier to obtain. This ruling would send the pipeline into new areas, potentially creating new community conflicts for months to come.

The Pennsylvania Department of Environmental Protection ordered the rerouting after non-toxic drilling mud under high pressure underground accidentally escaped through some cracks in the earth and reached the lake in Marsh Creek State Park this August.

Because of two other minor accidents in the same area in 2017, the DEP had already ordered the pipeline’s owner, Energy Transfer/Sunoco to identify an alternate route just in case.

When Sunoco formalized those plans for an alternate pipeline, it hinted at the new set of headaches that would crop up for some: “There is no existing utility corridor here, however; therefore, this route would create a Greenfield utility corridor and would result in encumbering previously unaffected properties.”

In addition, pipeline work that would be abandoned for a new route could create future problems.

“Moving a pipeline route that has been permitted is not a fast or simple task. The pipeline is currently in an existing utility corridor and may require crossing numerous pipelines,” said Bill Godsey, a Texas geologist and environmental scientist. “Also, new due diligence regarding environmental impact studies and regulatory approvals would be required, which could take years to complete. New agreements and negotiations with landowners would be required and if not successful, eminent domain could be required.

“The previous excavations and bore holes would be properly abandoned,” Godsey, who formerly was the chief geologist for the Texas Railroad Commission, told Delaware Valley Journal. “The changing of the approved path is much more problematic than completing the existing project. The completion of the project would be delayed for years.”

John Quaranta, a professor of civil and environmental engineering at West Virginia University, echoed those ideas.

“When you reroute, it’s also always a time scheduling issue and then it’s the issue of information gathering,” Quaranta told DVJ. “For example, before they would put in an underground borehole, an engineering firm or geology firm would go out and actually perform some preliminary hole work. They would drill some holes and characterize those. Now that work is all on the preplanning end, and it can take a year to get that work done.”

Obtaining rights to some properties can be lengthy as well. Quaranta said in many cases, the title to some parcel of land might belong to several heirs in a family and tracking all of them down and getting all of them in agreement is a time-intensive labor.

The remaining route will essentially require starting many projects from scratch.

“Sunoco will need to submit permit modifications and other necessary plans and documents to DEP for our review and approval,” said Virginia Cain with the state’s Department of Environmental Protection.

“In short, Sunoco must demonstrate their plans to re-route this section of the pipeline in accordance with all applicable laws, regulations and permits,” Cain told Delaware Valley Journal.

“DEP’s order doesn’t just halt work along a small portion of the line in Chester County. The action has significant repercussions downstream at the Marcus Hook Industrial Complex, where hundreds of jobs could be at risk if there are continued delays,” Snell told Delaware Valley Journal.

The DEP had been under increasing political pressure from anti-pipeline activists since August. Even though the spill was non-toxic, environmentalists and lawmakers were angry.

“Energy Transfer has spilled an estimated 10,000 gallons of proprietary drilling mud of undisclosed composition into a tributary to a drinking water source, recreation area, and wildlife habitat at Marsh Creek State Park. Enough is enough. It is time to pull Energy Transfer’s permits in Chester County,” a letter from lawmakers to Gov. Wolf said after the spill.

“We are calling for an immediate halt to all activity related to the Mariner East project, a revocation of all Energy Transfer/SPLP permits in Chester County, and a reappraisal of all ongoing and future pipeline projects in the Commonwealth.”

YAW:  What Critics Get Wrong About Energy Choice Read More

By Linda Stein on January 18, 2022
After weeks of warm and fuzzy introductory television ads, David McCormick made it official last…
Read More
[IS] Opinions

By Michael Graham on January 17, 2022
When word broke that a gunman had taken hostages at a synagogue in Colleyville, Texas,…
Read More