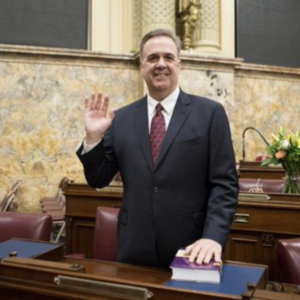 A Republican state representative said Monday he’s staying the course on trying to undo Act 77, a Republican-led bill from 2019 that eventually led to mail-in voting, but he hedged on whether full repeal was possible.

“What I did not vote for is what we ended up with [in 2020],” said Rep. Jim Gregory, who represents Pennsylvania House District 80 in Blair County. He added later he’s realistic that he might not have enough momentum to override the veto that has been promised by Gov. Wolf.

“What we owe the people of Pennsylvania is a better product moving forward, including the next primary in May,” Gregory said on Dom Giordano’s radio show.

Act 77 created ‘no-excuse absentee balloting,’ but elected officials could not have foreseen that with the pandemic, the act would essentially devolve into a de facto vote-by-mail system, given that both parties were promoting the new method as they tried to get out the vote.

The act only became controversial through 2020 as President Donald Trump repeatedly attacked mail voting. And Republicans became increasingly critical of the bill, especially after Pennsylvania’s Supreme Court ruled ballots received by mail up to three days after the election could still be counted.

Gregory told Giordano that the GOP was initially behind the bill because the legislation took away straight-party voting, where someone could vote for every Democrat or every Republican on the ballot with a single mark.

He went on to say national GOP officials were supportive.

“In the communications that were taking place between our leadership and the White House and the RNC, the brass ring for them, in their opinion, was getting straight-party voting eliminated,” Gregory said.

“In states that had, had it previously and got rid of it, you saw an opportunity for President Trump to be re-elected by a range of 4 to 8 percent. They did not concern themselves with mail-in balloting, and they were fine with that, in the communications that I’ve been told.”

Gregory also said part of the problem was the Commonwealth had not passed any real voting reform in 80 years and said states that have successfully enacted mail voting have done so in a piecemeal fashion, refining the process incrementally year after year.

When Blair said for a second time that the legislature has to make Act 77 “better for the people of Pennsylvania,” Giordano pressed on whether the lawmaker still wanted full repeal.

“[Repeal] is what we’re going to put forth, that’s our starting point,” Gregory began.

“You know, we could go ahead and pass it as is, and push for that [full repeal], but at the end of the day, the governor has already said he would veto any of those kinds of attempts. But that doesn’t mean we don’t do the job of putting forth what our constituents are asking.”

Shortly after the June primary, President Trump and the Republican National Committee sued Secretary of State Kathy Boockvar and all 67 counties over the way Act 77 was implemented.

“Contrary to the direction of Pennsylvania’s General Assembly, Defendants have sacrificed the sanctity of in-person voting at the altar of unmonitored mail-in voting and have exponentially enhanced the threat that fraudulent or otherwise ineligible ballots will be cast and counted in the upcoming General Election,” the lawsuit said.

Although Act 77 was largely passed with Republican support, there were some Democratic proponents as well.

“The goal was to get more people to vote,” Senate Minority Leader Jay Costa, D-Allegheny, told Public Source. “And it’s obvious that that’s what took place in the primary and also what took place in the general election by the volume of votes that we had across Pennsylvania and across the country. So, I think it achieved its goal.”

Costa’s early embrace of the legislation essentially foreshadowed the majority of the Democratic legislators coming around to do the same in 2020.