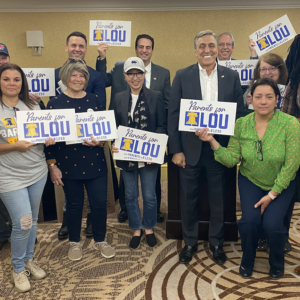 Lou Barletta with parents at his press conference.
News

Trailing in the polls with the primary just days away, gubernatorial candidate Lou Barletta picked up a handful of coveted endorsements Thursday from establishment Republicans. They include those of former Pennsylvania Gov. Mark Schweiker and former U.S. Sen. Rick Santorum.

The former congressman touted the “major announcement” ahead of a news conference in Levittown at the American Legion Post 960, where he was joined by Schweiker and former Lt. Gov. Jim Cawley, whom he called the “greatest leaders that I know.”

The news came after state Senate leader Jake Corman announced he was dropping out of the nine-candidate race to throw his support behind Barletta.

“I am proven, road-tested, and ready to serve as the 48th governor of Pennsylvania,” Barletta said.

There is concern inside the GOP that state Sen. Mastriano (R-Franklin) is too far right-leaning and would get clobbered by Attorney General Josh  Shapiro (D) in November’s general election. Republicans who share those concerns are rallying around Barletta, who they believe is the Republicans’ best chance at taking back the governor’s mansion.

Schweiker called Barletta the “most competitive candidate,” touting his experience as a mayor in Hazleton and a former lawmaker, equipped to run the Keystone State’s sprawling government.

“He’s got the right perspective,” Schweiker said. “He’s a fighter. He’s got big stones … For this candidate, this isn’t going to be just a once-in-a-while interest. This is going to be an everyday preoccupation. He’ll see to it as an everyday assignment, not an afterthought.”

As mayor of Hazleton, Barletta commanded the national spotlight for his restrictive immigration efforts, which he touched on again during the news conference, promising to eliminate sanctuary cities across Pennsylvania if he is elected governor.

In 2006, he backed an ordinance that would have prevented employers and landlords from hiring and renting to undocumented immigrants, The Philadelphia Inquirer reported.

Litigation ensued and the ordinance took effect, but such stark immigration policies were later embraced during the presidency of Donald Trump, whom Barletta supported early on in 2016.

Saying he had a “history of beating Democrats,” Barletta pledged that if he was elected he would remove Pennsylvania from the multi-state consortium Regional Greenhouse Gas Initiative (RGGI) on his first day in office. He also pledged to repeal Act 77 (the controversial no-excuse voting law), block biological males who identify as women from participating in women’s sports, push for parents to have more say in their children’s school curriculum, and do away with “toxic critical race theory,” which he believes stokes division between Americans.

“We’re going to teach our children to love each other, not hate each,” Barletta said.

That messaging resonated with other Republicans as Barletta also picked up key endorsements from Santorum and U.S. Rep. Fred Keller. They came not long after media reports that Pennsylvania Republicans had discussed coalescing around a single candidate.

Cawley suggested Barletta is the “only candidate” who can beat Shapiro. He referred to a TV attack ad from Shapiro many believe is actually designed to boost Mastriano among Trump supporters.

Democrats are “literally reaching in and trying to manipulate our votes,” Cawley said. “Well, folks, I have a message for Josh Shapiro. It’s this: Josh, you’re just not that clever, and your shenanigans are just not going to work. Pennsylvania Republican voters are pretty smart, and they are not going to allow you to pick their candidate for governor. … Josh is pretty sure he can beat Doug Mastriano, but he’s absolutely confident he will lose to Lou Barletta.”

Focused on his own campaign, Barletta refused to take shots at Mastriano. However, he stressed the importance of the GOP embodying a unified front heading into next week’s primary, adding the endorsements were another step toward achieving equanimity in the party.

“The best thing for Josh Shapiro is for us to come out fractured,” he said. “I have been a unifier. I haven’t run one negative ad against any of my opponents. This is not in any way a reflection on Doug Mastriano or any of the other candidates. What I’m doing is making my case in the final five days that I am not only the one who can unify our party but I am the only one who can beat Josh Shapiro because of my history.”