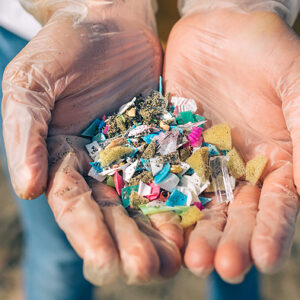 A new report from a Pennsylvania environmental group found samples from every one of the state’s 53 popular waterways analyzed contained microplastics, with a majority also containing microfragments and microfilm.

“The results of this study should set off alarms for all Pennsylvanians who love our state’s rivers and streams,”  said Faran Savitz, conservation associate at PennEnvironment and author of the report. “The staggering amount of microplastics we found likely means that no river, lake, or stream is safe from this increasingly common contaminant.”

A microplastic is considered a piece with at least one dimension less than 5mm in size (the thickness of a thumbnail or smaller). The waterways analyzed function as the drinking water supplies, economic drivers, and recreational sites of communities.

The report, which was a group effort between PennEnvironment officials, state representatives, sister organizations, and volunteers, detailed the national issue of plastic pollution. “Americans generate over 35 million tons of plastic waste every year, 90 percent of which is landfilled or incinerated,” Savitz wrote. “In fact, the U.S. throws out enough plastic every 16 hours to fill the Dallas Cowboys stadium, and that amount is increasing.”

In Pennsylvania alone, the Philadelphia Water Department removes 44 tons of trash from a 32 mile stretch of the Schuylkill and Delaware Rivers each year, 56 percent of which is plastic waste. In five years, PennDOT spent $65 million on highway cleanup. “The problem is so widespread that nine of the largest cities in Penn­sylvania spend over $68.5 million every year on litter and illegal dumping, with $46.7 million of that going toward litter abatement,” Savitz wrote.

It is likely that only a minute portion of plastic pollution in the ocean has been accounted for. Microplastic pollution has been found in some of the remote corners of the globe, including Mt. Everest, the Antarctic, and the French Pyrenees Mountains.

Similar to marine life and animals, humans are ingesting plastic particles too. According to the report, “Humans consume a credit card’s worth of plastic weekly.” Sam Mason, Ph.D., professor of Chemistry at Penn State Behrend who also runs the Department of Sustainability, detailed the public health concerns behind microplastics in the webinar. One of the feared health effects from plastic prevalence involves reproductive health. Mason says men’s sperm count has decreased and women are now experiencing puberty at an earlier age due to endocrine-disrupting chemicals from plastics.

These claims of health risks are still the subject of debate, however, and the World Health Organization released a 2019 study finding no health risks to drinking water from microplastics.

The municipalities filed a joint lawsuit Wednesday to fight the preemption, citing the state constitution, under which Pennsylvanians have “a right to clean air, pure water, and to the preservation of the natural, scenic, historic and esthetic values of the environment. Pennsylvania’s public natural resources are the common property of all the people, including generations yet to come. As trustee of these resources, the Commonwealth shall conserve and maintain them for the benefit of all the people.” PennEnvironment aided the municipalities in preparing the lawsuit.

In addition to phasing out single-use plastics and repealing the General Assembly’s measure, PennEnvironment recommends passing producer responsibility laws, such as the Break Free From Plastic Pollution Act, and halting policies that promote increased manufacturing and use of single-use plastics to disincentivize plastic production.

Environmental policies have proved effective in decreasing plastic pollution, Savitz noted in the webinar presentation. The Microbead-Free Waters Act of 2015 prohibited the addition of plastic microbeads in personal care products. Savitz cited this act as a telling reason why PennEnvironment found only one waterway containing microbeads.