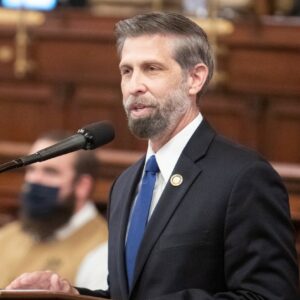 In an effort to deal with the epidemic of gun violence in Philadelphia that has spilled over into Delaware County, state Rep. Craig Williams sought and obtained state funding to hire additional prosecutors for those jurisdictions.

Williams (R-Chadds Ford) recently announced that $1.5 million would be set aside in the new state budget to hire additional prosecutors for the district attorney’s offices in Delaware and Philadelphia Counties.

The new prosecutors would be assigned as special assistant United States attorneys (SAUSAs), who work directly with the U.S. Department of Justice and United States Attorney’s Office in the Eastern District of Pennsylvania, and they would be solely focused on prosecuting gun crimes in Philadelphia through Project Safe Neighborhoods (PSN).

PSN was established by the U.S. Department of Justice in 2001 to improve neighborhood safety through a sustained reduction in violent crime. Supporters say prosecution of gun crimes through the federal program has proven to be an effective tool decreasing gun crimes in PSN cities by 10.5 percent since its implementation.

“I have served as an assistant United States attorney in both the Eastern District of Pennsylvania and the District of Colorado, where I prosecuted PSN cases in both jurisdictions,” Williams said in a statement.

In terms of violent gun crime, there have been 1,504 nonfatal and 380 fatal shootings in Philadelphia this year alone. The only day someone wasn’t shot in Philadelphia this year was January 2. There have been 443 homicides in total this year, which is a 14 percent increase over this time last year. Arrest percentages for homicides and nonfatal shootings are up too, by 2 percent and 34 percent respectively.

For those who are arrested, prosecutions are up by 16 percent for homicides and 43 percent for nonfatal shootings. When it comes to case outcomes, however, that’s when things start to take a turn for the worse. Sixty-four percent more cases were withdrawn before they even went to trial or were dismissed . Acquittals are down by 12 percent, and guilty pleas and verdicts are both down too, by 11 percent and 24 percent respectively.

Williams hopes that by hiring more prosecutors, more cases will be able to go to trial, and more guilty pleas and verdicts will follow.

“It is my sincerest hope that the district attorneys will seize this moment of collaboration,” said Williams. “At a time when Police Commissioner Danielle Outlaw announces that Philadelphia will receive federal assistance from the Department of Justice through the Public Safety Partnership program, when District Attorney Krasner is asking Philadelphia City Council for more funding for police and prosecutors for a backlog of cases, and when all federal agencies in Philadelphia have announced their ‘All Hands on Deck’ initiative to combat violent crime in the city, I hope this funding will be viewed and used as an added tool and partnership in getting violent criminals off our streets and making our communities safer.”