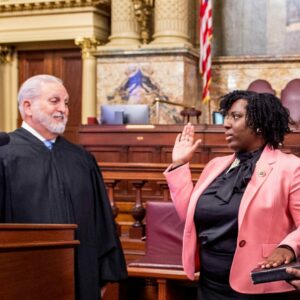 Democrat state Rep.  Joanna McClinton declared herself the House Majority Leader Wednesday, despite not having a majority or receiving a single vote from legislators.

“Pennsylvanians cast their ballots in the free and fair 2022 General Election,” McClinton said in a statement. “The results of that election are not in dispute and in the majority of legislative districts – 102 out of 203 – the people of Pennsylvania voted to elect a Democrat to represent them in the House of Representatives. Pennsylvania’s voters have spoken, and the will of the people is the ultimate authority in this Commonwealth.”

But Democratic Rep. Tony DeLuca was reelected even though he died before the election. And Democratic Reps. Austin Davis and Summer Lee were elected to lieutenant governor and Congress while at the same time they were re-elected to their state House seats.

As a result, Democrats are currently in a minority, with Republicans holding 101 seats and Democrats holding 99.

“While admitting three vacancies exist by calling special elections in the 32nd, 34th, and 35th districts–vacancies that give Republicans a 101-99 majority in the House–Democrats are creating internal confusion by simultaneously speciously alleging they have a fake, gerrymandered majority that has the authority to conduct the business of the House,” Republican Majority Leader Bryan Cutler said.

“Rep. McClinton’s actions are an affront to our democratic institutions, and issuing a competing Writ of Election has created electoral chaos that ultimately shows they do not believe elections matter and every vote really does count,” Cutler added.

It is possible McClinton may eventually ascend to the Majority Leader’s job. If she does, she would be the first woman to serve in that role in the 246-year history of Pennsylvania’s House of Representatives.

Most state House and Senate members will take their oaths of office on Jan. 3.

Jason Gottesman, a spokesperson for Cutler, said there was no way to stop an elected representative from being sworn in.

“That being said, it’s the power you’re able to exercise after you’ve been sworn in. And clearly now, with the majority in the House being 101 to 99, given the death of Tony DeLuca, and now the resignations of Summer Lee and Austin Davis, the Democrats don’t have the majority in the House. The numbers show that Rep. Clinton is not able to act as majority leader because she’s not in the majority. So, whether she was sworn in is beside the point.”

“By aiding Rep. McClinton in an attempted illegal and unprecedented takeover of the Pennsylvania House of Representatives when the plain numbers show Republicans hold a 101-99 House majority following the death of Tony DeLuca and resignations of Summer Lee and Austin Davis, House Chief Clerk Brooke Wheeler—the House Democrats’ hand-picked Clerk—must be removed from her office for abetting and recognizing this attempt at an illegitimate power grab,” said Keefer.

“Constitutional officers hold dispassionate, nonpartisan positions of public trust and confidence. By aiding House Democrats in their illegal behavior and picking sides, Chief Clerk Wheeler has broken that trust and destroyed that confidence. She is no longer fit to serve in her position, and I will be introducing this resolution seeking her removal,” Keefer said.

McClinton said voters want the General Assembly to “work together in a bipartisan manner. Our caucus embraces this mandate because it means we’re going to have to fundamentally change the way our chamber operates. Our caucus will govern in a way that is representative of our diverse commonwealth. Rather than bottling up bills in committee just because they were introduced by the opposing party, we’ll welcome debate on policy ideas to strengthen and improve them. We will stay grounded in the needs of the Pennsylvanians who sent us to Harrisburg to represent them, not partake in political games at the expense of our communities. Rather than take advantage of parliamentary procedure to advance a partisan agenda, we will collaborate with our partners across the aisle, across the building in the Senate, and with the incoming gubernatorial administration.

“After more than a decade of Republican management, today is a fresh start. A day for new leaders, new perspectives, and new collegiality. I am confident that together we can do amazing things to advance our commonwealth.

McClinton has served the 191st district, which includes portions of southwest and west Philadelphia and Yeadon and Darby boroughs in Delaware County, since August 2015 when she won a special election. In 2018, she was elected the House Democratic Caucus chair, the first woman and African American to hold that post, and in 2020 she was elected to serve as Democratic leader.