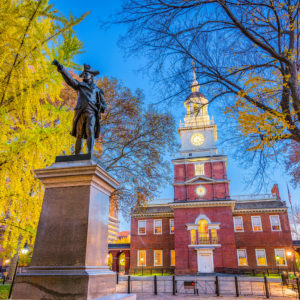 Independence Hall, where America’s Founders met to supervise a war against British oppression, is under fire again. And this time, it’s with the French.

Independence Hall, the Liberty Bell Center museum, and other nearby buildings currently get their heat from a French multinational named Vicinity Energy. It operates the Grays Ferry Cogeneration plant at the Schuykill Station, parts of which were built in 1903.

The National Park Service, which manages Independence Hall, has awarded a no-bid contract to Philadelphia Gas Works (PGW) to provide the heat instead of the steam plant. “Sacre Bleu!” cried some local environmentalists.

In an August, op-ed, The Clean Air Council and its executive director, Joseph Otis Minott, warned about the proposal, claiming it’s at odds with the Biden administration’s green policies.

“President Biden and his administration have made bold, meaningful promises to address climate change. This project was commissioned during the Trump administration, and the response from the local National Park Service branch this year has so far been disheartening,” he wrote.

Minott’s pleas appear to have fallen on deaf ears thus far. Perhaps in part because many Pennsylvanians are surprised to learn such an important facility is still using the “cutting edge” technology of the 19th century. And perhaps because the Grays Ferry Cogeneration Station uses both natural gas and, at least for the moment, No. 6 fuel oil.

“In addition to natural gas, the plant’s air permits allow it to use oil, including No. 6 fuel oil, a residual product that contains a high level of sulfur and other impurities,” the Philadelphia Inquirer reported last year.

Who objected? The Clean Air Council.

The Clean Air Council, which has been involved in the urban environmental movement since 1967, says PGW’s equipment is leaky. It is no stranger to this type of battle and has chalked up a few wins in the past. It argues that due to PGW’s old equipment, methane will be released into the atmosphere, which is one of the causes of rising temperatures, climate scientists say. Besides the environmental aspect of the switch, the Council said that the closed bidding makes it all suspicious. They want the whole thing reviewed with the project details open to the public.

And PGW reportedly is charging Vicinity upwards of 1,000 percent more for its own natural gas, which Vicinity thinks is a strategy to punish and demoralize the company.

If this catches fire in Washington, my guess is that someone will make a phone call and the project will stop upon further review. Democrats run the city and the city court. It would be a political decision, of course, rather than having anything to do with fuel sourcing or even climate change itself as there are no studies that exist that would show what the CO2 footprint of the National Park Service in Philly would look like with natural gas or steam heat.

If someone told you Independence Hall would become a battleground over the country’s climate change policy you would think it’s a plot in some Leo DiCaprio enviro-drama. Unless the National Park Service agrees with the council, and so far they have not, PGW will keep the historic National Park Service buildings warm this winter.

But if Democrats think it’s a bad look for Biden’s climate agenda and want a dog in the fight, it certainly won’t take much effort for them to make an example out of Independence Hall. The National Park Service would melt like a snowflake if it got a call from the White House. That would pit PGW and the City of Philadelphia at odds with Biden’s climate change policy.

Kenneth Rapoza is a veteran reporter and a former staff journalist for Dow Jones and the Wall Street Journal.