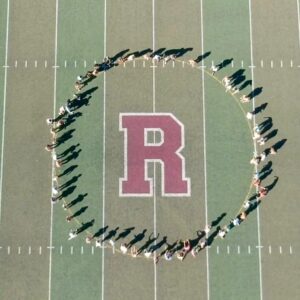 Cancel culture has appeared in Radnor with the elimination of the Raider nickname from Radnor High School and its football team– a school that is located on Raider Road.

In an 8-1 vote on Sept. 2, the Radnor Township School Board voted to throw out the 90-some year Raider name along with any Native American images. A previous board had axed the Native American mascot in 2013, bowing to political correctness. But as more Radnor residents and Radnor High School alumni learn of the plans to ditch the Raiders and rebrand the high school mascot, opposition is swelling.

Hunny Witthoeft, a RHS senior, circulated an online petition that has garnered more than 2,400 signatures. And Kyle Addis, a RHS alumnus who is now a junior at Franklin & Marshall College, spearheaded a Facebook page “Change The Mascot, Keep The Name: Keep the ‘Raider’ in Radnor!” that’s drawing attention to the issue.

School Board President Susan Stern pointed out the purpose was to pick a new name, so Raider, as the old name, was not considered despite that massive support in the survey. Critics have also sent hundreds of emails and letters to the board to protest nixing the Raider name, but Stern said there have also been letters and support from those who approve the change.

Addis is also perturbed by the process. The committee members had discussed and disregarded several names but were overruled by district administrators. Some of the rejected names are now back in the mix to be presented to a community and student focus group for input. The administrators also told the committee to vote for names by ranking their preferences, rather than by majority vote.

“The rule change for the committee voting process was not discussed or approved by the committee,” said Addis. “We had no say.”

The new proposed names are Gryphons, Raptors, Ruckus, Dragons, Phoenix, Revolution, and  Maroons/Reds. The letter “R” is also a contender.

“All the names that were previously eliminated came back into consideration under these new rules – except for the name ‘Raiders,’ Addis said. “The public needs to know that the names that have advanced as a result of this rule change were not chosen by the majority of the committee, and do not meet the guiding principles outlined in our first meeting … The committee chairs (administrators) changed the rules in the middle of the process without consulting any committee members and without committee approval. I feel the Radnor community needs to be aware of this flawed process, as we will be the ones who ultimately ‘pay’ for any rebranding efforts.”

Stern, meanwhile, said the change in the voting system was due to the committee being unable to reach a consensus on new names to recommend.

Kelly Martin, an alumna and parent, posted on Facebook calling out the current board members: “Raider Day in Radnor has always been a day to look forward to, a day to come together, a day to celebrate pride in our community. Board members Susan Stern, Sarah Dunn, Lydia Solomon, Bradley Moore, Andrew Babson, Jeff Jubelirer, Liz Duffy and Amy Goldman, who ran to represent our community have grossly abused their power and created turmoil in an already tumultuous year for our students. I’m sad for them that instead of embracing #RadnorRaiders pride they sought to tear #RaiderNation apart. Let’s show them we are one, we are  #RadnorRaidersforlife.”

Also on Facebook, Catherine Lynn Mozino said, “Corrupt is a great word for this whole situation. In my opinion, it applies to the school board and the (bull) of not listening to the people who are speaking up & saying leave the Raider name! and the fact that the rebranding has already been done! Why waste time to do it again & money to do it again … Leave the flipping name and spend time & money on other significant and important issues in the forefront … I’m so annoyed at these people that aren’t HEARING what is the majority and only have time to hear themselves spew hot air!”

However, Stern said she does hear what the opposition is saying but simply disagrees.

“There is a narrative that we’re not listening, that we do not care,” said Stern. “We do care. We just don’t agree. I don’t fault them for their feelings. I am listening. I do know they’re upset.” Stern says she answers every email sent to the board. She has also offered to speak with even the most vociferous critics, but they do not want to talk to her.

She also said that was notice given that the topic would be discussed but she did not know beforehand there would be motions made to vote on September 2.  And, she contended, the community knew or should have known the issue was being discussed.

“The conversation around removal of the name has existed in Radnor for many years and students came to us last year, they went to administration first, they wanted to speak to us which is their right,” said Stern. “In general, the country has been grappling with social justice issues the last few years. I don’t understand the notion that this came out of the blue.”

Board Member Nancy Monahan, who was the sole vote against stripping the high school of the Raider name, argued at the Sept. 2 meeting that it was not necessary to remove the Raider name to separate it from the Native American imagery that some deem offense. She cited other teams that have done that, including the Colgate University Raiders.  And she pointed out there are other types of raiders, in addition to Native Americans, such as Vikings or pirates, she said.

A 2014 RHS graduate, said the Native American imagery began in the 1960s to honor former RHS coach Chief Emerson Metoxen, a member of the Oneida Tribe, while the Raider name itself was adopted decades earlier.

“It hasn’t been historically been tied to the Native American imagery,” she said. “I don’t’ see a problem with going forward as the Raiders.” While Metoxen was pleased to be honored, his descendants are reportedly divided on the issue.

Parent Kate Hart said, “I cannot understand why the school board chose to address this issue during a pandemic when families in Radnor are out of work and businesses all along Lancaster Avenue are closing. We are facing a school budget deficit and property taxes are increasing. It seems tone-deaf for the board to be pushing this through at a time when the children and families they represent are in distress. Our board has no idea what this rebranding will cost. Imagine if they used those funds to help underrepresented minority children in Radnor? They could invest in helping students apply to college, fill out FAFSAs, and learn about trade school opportunities. Instead, they are forcing this change at a time when our community needs to come together and support each other.”

“It’s so unfortunate that instead of admitting that they were wrong about initially removing the Raider name, the board chose to double down on a bad decision,” said Julia Pelagatti Bohnenberger, a former school board member.  “This disregard for the committee’s democratic process proves that they do not represent the Radnor constituency, and that’s their basic responsibility. (They are) exposing their true colors is an interesting move in an election year.”

In a letter to the board, resident Matthew Marshall said, “students at all Radnor schools are suffering severe emotional distress and mental anxiety from being out of the classroom for nearly an entire year. During this challenging period, the community has unified around the central focus of getting our kids back into the classroom. We have pleaded with the elected school board members to make this your focus – your sole focus. Instead, the members of the school board decided to further divide the township by ramming through the decision to retire the Raider mascot, without a process and without knowing the cost for such an initiative.  You collectively as leaders for the township could not pursue this endeavor at a worse time. The budgetary implications alone should make you pause or delay this decision as many Radnor families suffer the financial impacts of the pandemic. The words tone-deaf and out-of-touch come to mind regarding this board’s current behavior … As a 55 year Radnor resident, K-12 alum of Radnor Schools and University of Pennsylvania graduate (and a parent of two children who graduated K-12 from Radnor), my wife, Bonnie, and I are perplexed by the motivation to go through a mascot rebranding project during this time of global pandemic. Radnor’s students and parents are suffering enough.”

Stern said the cost of the rebranding is not yet known because items, such as T-shirts, will be sent out to bid.

“It’s not going to be $1 million to change T-shirts, football helmets, and signs,” said Stern, who also noted an inventory found 75 percent of RTSD items that say Raider have Native American images or an “R” with a feather.

Meanwhile, Anna Marie Jones offered these thoughts to the Facebook group: “According to the 2019 RTSD Ethnicity by School Report, we have 4 students who were identified by their guardians as “Indian/Alaskan American”. Whether we have 4 or 400 Indigenous students attending our schools, it is a small price to pay to make sure all children feel honored and included…Pretend you were one of the 4+ Indigenous students. Wouldn’t you want to feel supported by your school? … It is my hope -and I’m hoping you are with me on this- that one day, if and when any of those students who identified as “American/Alaskan Indian” decide to study their history and grow stronger in their ancestral roots and closer to their tribal lands (and maybe they are already doing this!), they can look back and say that their town and school community always supported them.”