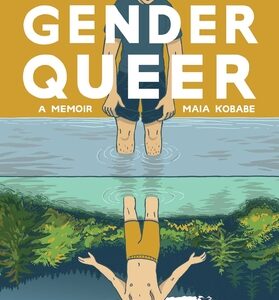 On Sunday, Mike Lake, along with the support of some other Radnor Township School District parents, filed a police report about the controversial book “Gender Queer,” which is available in Radnor High School’s library.

As reported last spring, “Gender Queer” is a “graphic biography of a young female who wants to be male but must figure out how to incorporate her female body into that fantasy.”

Parents throughout the Delaware Valley region have objected to these age-inappropriate books in schools. Fenicia Redman, a Malvern mom, has been at the forefront of this issue and has given her testimony before the Pennsylvania State Senate floor, as well as filing a lawsuit against the Great Valley School District.

Radnor is not the only school district that has issued this book. Central Bucks, Downingtown, Great Valley, and West Chester Area school districts are among others in the DelVal region to have these books available in their taxpayer-funded school libraries.

This issue has been trending for a while, as many Radnor parents expressed their outrage about inappropriate books in a school board meeting last year. 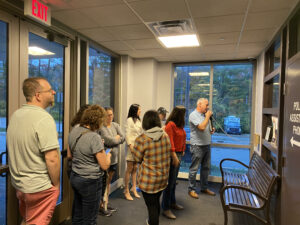 Mike Lake uses the intercom to summon an officer, while other parents look on.

In response to this backlash, RTSD created a small group for these controversial books in question. While “Gender Queer” was under review, the decision was split.  Superintendent Ken Batchelor cast the deciding vote to keep it.

While this was a last resort option for going to the police station to file this complaint, Lake knew that being accompanied by other parents would help send a message on the seriousness of this issue.

“I knew this situation had to be addressed because it’s our children, not their children,” Lake said. “One of the reasons we came to Radnor was because of the quality education, and to have this sexually explicit content available to our kids in the school library is unacceptable.”

Another parent in attendance who has children who graduated from Radnor but wants to help address the situation is Amanda Castilleja. While her son graduated in 2018 and her daughter in 2020, Castilleja has seen a drastic change in what the school district now allows to be exposed to its students.

“Since 2005, I’ve had my kids attend this school district, and it has been horrible what has transpired since then,” Castilleja said. “We’ve been clear that we don’t want to ban books, but we want to ban those that contain sexually explicit content and make sure our voices are heard.”

Asked to comment by DVJournal, RTSD spokeswoman Theji Brennan said, “The Radnor Township School District welcomes and values parent engagement in conversations regarding programs, policies and procedures.  If parents have any concerns about materials, they should reach out to their child’s teacher or principal.   Policy 144.1 in our district policy manual provides guidance on the selection of library resources and a procedure for citizens to request a reconsideration of library materials.”

This filed complaint will now go to Radnor’s lieutenant’s office as they, along with other detectives in the department will investigate it.

“It’s vital that we continue to be aggressive and keep pressing on this issue until we see changes made,” Lake said.