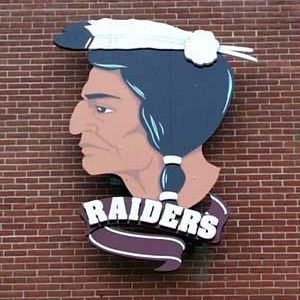 The Radnor Township School Board held a special meeting Tuesday night to debate the future of the high school’s “Red Raider” name and mascot.

Although the board did not make any decision, they are expected to do so soon as the national debate over team mascots and nicknames — like the formerly named Washington Redskins — continues to be a flashpoint for the country’s reckoning on race.

Radnor High School in Delaware County has a logo including the letter “R” with feathers, and a mascot image symbolizing a Native American.

The school has dealt with this controversy before. In 2013, the school retired its costume mascot, but still kept the logo, name and mascot symbol.

Since the 2013 retirement of the costumed mascot, students have become more vocal about dropping the Raider name and association with Native American images altogether.

Mike Petitti, the district director of communications, explained the history he and others were able to uncover about the usage of Native American imagery in the school and the Raider name.

Petitti concluded that the Raider name created in the late 19th century and early 20th was not intended to have any relation to Native Americans.

School legend has it that the Native American symbols began to be used sometime in the early 1960s to honor a teacher, Emerson “Chief” Metoxen, a member of the Oneida Indian Tribe and a beloved staff member for more than 20 years. Metoxen was critical in teaching students who would be wearing it how to be respectful in its usage.

Leslie Greenfield, granddaughter of Metoxen, read a statement from the family addressing the issue in which their late family member has been invoked.

“We would like to express our deep conviction that using Native American imagery, along with the name Raiders, perpetuates racial stereotypes,” she read from the statement. “We all need to understand that associating Raiders with Native Americans in general, or with my grandfather in particular, is simply no longer acceptable.”

In 2006, an op-ed published in the School Paper, the “Radnorite,” questioned if the school should continue to use these images and names to represent the school.

Adam Bloom, the author of the article, was in attendance at the board meeting.

“Radnor intends to honor native people with its name,” Bloom said. “Yet it strengthens a crude stereotype that reduces all native existence to a romanticized, westernized, image of a warrior that has long passed.”

“This mascot, so-called ‘honoring,’ does not respect our native culture,” Ramirez said. “This is a mockery. A mockery to our history, a mockery to our people.” She also pointed out that Native Americans make up less than one percent of the school.

While most of those who spoke at the meeting were in favor of removing the name and imagery, some spoke out against possible plans to do so.

Margaret Finley Martin grew up in Radnor, as did her children. She expressed disbelief at the outrage.

“We thought the name Radnor Raiders was a great tribute to the American Indians… even my father-in-law is part Cherokee Indian and he was flattered with it. I just don’t seem to understand why some people find it offensive.”

Kyle Addis graduated from Radnor in 2018 and agreed with the need to end the use of Native American imagery in the district. However, he argued the name Raiders should be kept along with the feathered “R” logo. He said doing so would make the name more like it’s original use by the school, as described in the presentation early on by Petitti.

“Rather than erasing the past, I think we can use it to lift people up, strengthen our identity as a school community, and teach the importance of diverse experiences and backgrounds,” Addis said.

On a larger scale, recent polling finds the nation still divided over such name changes.

According to a Morning Consult poll conducted in early July, almost half of all adults surveyed said the Washington Redskins should keep the name, while 29 percent said it should change, and 22 percent were undecided.

A 2016 Washington Post poll showed that 90 percent of Native Americans surveyed said they were not offended by the Redskins logo. A new academic study, however, puts that number at closer to 50 percent.