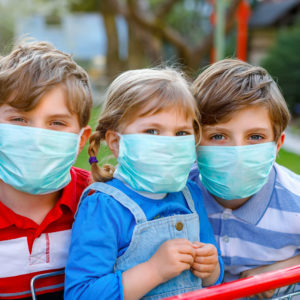 The Centers for Disease Control on Friday lifted mask mandates across the country, depending on factors such as the number of cases in an area.

But Radnor parents were way ahead of them. Many came to a school board meeting last week to demand the mask requirements be lifted.  After a lengthy meeting the board agreed.

Many residents cited recent graphs to build their case for moving to an optional masking policy in schools.

“The final graph compares the Radnor School infection rates under the mask mandate to four other school districts that are mask optional. The curves are practically identical. I don’t see a correlation between mask-wearing and transmission rate. The scientific evidence that masking is doing any significant amount of good is disappearing,” one woman said to applause.

While the debate over how best to respond to the pandemic is framed as political, Radnor citizens had little to say about politics on Monday night. “…I think that our children have endured the most. These moments are real for them. What’s becoming a normal life for them is not what any of us know as normal,” said Dave Falcone, a parent and former school board member.

A few children and teenagers voiced their thoughts. Still submitted written testimony on the matter. Student Cackie Martin asked, “Do you know how much less frequently students participate… when they have to raise their voice to the level of a yell just to be heard by teachers in their plexiglass cage? Tonight I stand here begging you for oxygen for my classmates and I and I’m just begging to see a friendly smile in the hallways of the high school,” she concluded to a standing ovation.

Many speakers took a strictly scientific approach. Resident Chris Vail cited a variety of studies, including ones from the CDC, WHO, Annals of Internal Medicine, and PLOS1 in his argument for a mask-optional policy. “The fact is we spent two years arguing about whether or not we were following the science— and the science for face masks has never been there. It’s time we stop the madness, we admit that we were wrong, we admit our mistakes and we let the kids breathe freely, finally. As they deserve.”

Christina Heinzer summarized 65 studies that all concluded masks have damaging health consequences. She enumerated the side effects that could be linked to mask use from increases in blood carbon dioxide, heart and respiratory rates to decreases in cardiopulmonary capacity, heart issues, exhaustion, as well as emotional issues, headaches, and dental issues.

While many of the evening’s speakers were sympathetic to how difficult these safety decisions can be for commissioners, none spoke in favor of a mandatory mask policy. Even the commissioners lamented how challenging it had been to preside over the previous decisions made on the matter.

“We don’t take this lightly. This has been the most daunting thing I will ever do in my life— and I raised three children,” said School Board President Susan Stern. In a unanimous vote, the board decided to move the district into a mask-optional phase.