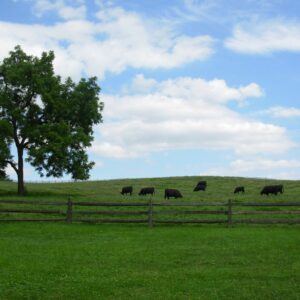 A Radnor Township commissioner has been crusading for the township to recover some $291,489 in lost tax revenue due to an agreement by the Ardrossan Farms development to lease land to a farmer for $1 a year.

Issues of fairness and the intangible value of preserving open space came to the fore in a sometimes contentious discussion Monday. The Ardrossan estate was the last large piece of property to be developed in Radnor. Township commissioners seven years ago wrangled over trying to preserve part of it as a green swath of land for future generations.

Commissioner Richard Booker argued the township is getting the raw end of the deal by allowing a farmer to lease township property for that small sum. Other taxpayers must make up the brunt of the tax that otherwise would be collected by the township, county, and school district, Booker contends.

However, he lost his motion 4-2, with Commissioner Jake Abel, the other Republican on the board, voting with him. Commissioner Sean Farhy abstained.

Booker had also voted against the original agreement with Richard Billheim’s Fern Valley Farm in 2015.  The agreement allows the wealthy property owners, including County Council Chairman Brian Zidek, a Democrat, to access agricultural tax breaks under Act 319 because Billheim farms part of their properties. Zidek, for example, who owns his 14-acre estate under a limited partnership, paid $4.8 million in 2019. With the agricultural exemption it is assessed at $3.9 million and the township, school district and county receive $14,865 less in taxes yearly because of that exemption.

“It’s become clear that the township license agreement with Fern Valley enables landowners to avail themselves of the lower agricultural assessment values,” said Booker. “What I want is to get the township out of the business of farming.”

When the township purchased 71 acres for $12 million from the 300-acre Ardrossan estate that was being developed as upscale housing in 2013, officials promised to build a trail for the public on those acres. So far the township has not built its trail and those acres are being used by the farmer not the public, said Booker.

“There is currently no access to the land by the public and no public facilities,” said Booker. Meanwhile, Radnor Township is paying $600,000 a year in principal and interest on the $12 million it borrowed for that land.

Commissioner Lisa Borowski argued the township benefits from fewer homes being developed at Ardrossan because of the farming and the purchase of the open space. There is less wear and tear on the roads, sewers and fewer children in the school system, she said.  If not for the agreement with the farmer and the subsequent agricultural easements the property owners obtained, “we would have substantial development” at Ardrossan. She promised to work toward building the trail system. 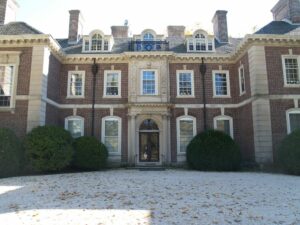 “It’s iconic,” Borowski said of Ardrossan, which inspired the “The Philadelphia Story,” a play and movie based loosely on the late socialite Hope Montgomery Scott, who was portrayed by Katharine Hepburn. “I don’t see how canceling the lease with the farm would be advantageous to us in any way.” It is the last working farm in Delaware County, she said.

Farhy said the lease is “not a good business proposition” for the township. He noted various other entities, like sports clubs that use township property, pay fair market value.

When Booker tried to speak again, Board President Jack Larkin cut off his mic and Farhy jumped up and said, “You are not going to mute us. We have freedom of speech.” Larkin then called a recess.

Kate Wolff, who is the wife of Billheim, said “We disagree vehemently with Booker and Farhy’s comments. While the lease is only for a dollar, we actually provide the township much more in return.”

For example, Wolff said, “We keep the fences repaired, the fence-lines trimmed and the fields maintained. And of course we have our beautiful cows in the fields for everyone to see and enjoy. This hilly ground and low-lying wetland is perfect for cattle but not suitable for anything in regards to fields for sports.”

“We donate the upkeep of this land to the township. If we did not pay the costs to maintain this ground, the township would take on that expense, creating more taxes for residence,” she said.

“As for the homeowners who have purchased tracts on Ardrossan, we appreciate that people with enough money can donate land.” she said. “Most people can’t. We support these preservation tax laws. Open ground is shrinking. Once it’s gone, it’s gone. You can’t get it back.”

During public comment, resident Leslie Morgan said, “A dollar a year is not a fair market value.” The property owners claiming the agricultural exemption should do their own farming or have agreements with Fern Valley. Her parents, who are in their 90s continue to farm on their land that receives an agricultural easement in Chester County.

“Brian Zidek can consult me, maybe my mom can come out to help him,” said Morgan.

Sara Pilling, another resident, complained that the farmer is using herbicides and pesticides on the corn he grows.

“When Hope Scott had bovines on her property, they were Ayrshire milk cows” but Billheim now has 60 Black Angus beef cattle, which are different animals and could be dangerous to children, especially during spring calving season.

“This is an incompatible business,” said Pilling.

In a related matter, many of the new homeowners also bought adjacent lots and deeded those to the North American Land Trust, receiving tax benefits and deed-restricted open space that can’t be developed next to their houses, a plan promoted by Eddie Scott, who was selling off the land on behalf of his family.  Scott declined to comment.

Meanwhile, several of the Ardrossan Farms residents are appealing the reassessment of their properties and Delaware County opposes those appeals.

“As for local taxes, I reject the premise that all taxpayers in Delaware County should subsidize these folks in Radnor,” said William Martin, the county solicitor. “There is clearly a value to the property staying undeveloped. It contributes to the value of the properties at Ardrossan Farms. The assessment is modest given the value of the Ardrossan properties. There is no reason for the rest of the county taxpayers to be subsidizing those mansions.”