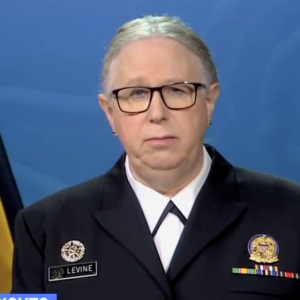 Rachel Levine: I’m Glad I Had Kids Before I Transitioned

Assistant Secretary of Health Dr. Rachel Levine is no stranger to controversy, but the former Pennsylvania health official’s recent comments about being happy to have transitioned from male to female after having children have sparked outrage from some parents and pro-family organizations.

Discussing transitioning later in life, Levine speculated that being a 15-year-old in today’s environment might have led to transitioning while still young. Then Levine added, “I have no regrets because if I had transitioned when I was young then I wouldn’t have my children. I can’t imagine a life without my children.”

The video, which went viral on social media Monday, is from a 2019 meeting of the Society for Adolescent Health and Medicine.

Critics responded by pointing out that Levine is an outspoken proponent of giving puberty blockers and performing surgery on teens as part of “gender-affirming” treatment.

In August, Levine said the federal government wanted to “affirm, support and empower youth … to get gender-affirming treatment in their states.”

“Gender-affirming care” refers to the use of puberty blockers, hormone therapy, and even surgery on children and teens who identify as transgender.

“It’s a good thing that, based on personal experience, Dr. Levine recognizes that having children is a blessing. We agree,” said Michael Geer, president of the Pennsylvania Family Institute. “But we wholeheartedly disagree with Dr. Levine’s aggressive agenda to encourage the use on minors of puberty-blocking chemicals, cross-sex hormones and disfiguring surgeries, all of which permanently destroy their ability to conceive or bear children.

“Medical professionals are pledged to first, do no harm. But when, in step with this transgender agenda, they clearly are harming minor children by permanently sterilizing them (and worse), it’s past time for policymakers to step in and protect these children’s bodies and their futures.

“That Dr. Levine would forever deny these minors the joy of bearing children is beyond hypocritical.”

Madeleine Kearns, who writes about transgender issues for National Review asked, “Has it occurred to him [sic] that some of the children he encourages to undergo sterilizing drugs and surgeries may later regret forgoing the possibility of parenthood?”

One of the most hotly contested issues in the transgender policy debate is whether minor children should be able to make permanently life-altering medical decisions like surgery or taking powerful puberty blockers without their parents’ knowledge or consent. California Gov. Gavin Newsom (D) recently signed a bill into law that he said would make his state a “sanctuary” for minors who want medical treatment to change genders.

“California is the first state in the nation to create a sanctuary for transgender youth seeking gender-affirming medical care,” reported KQED in San Francisco. “Gov. Gavin Newsom signed a new law in September that ensures transgender kids from elsewhere can safely access hormones or puberty blockers here. The legislation also shields families from child abuse investigations or from being criminally prosecuted for seeking gender-affirming care.”

And Levine supports Biden administration guidelines recommending surgery and medication — not counseling — for minors experiencing gender dysphoria, claiming without evidence that all medical professionals agree with her.

“There is no argument among medical professionals – pediatricians, pediatric endocrinologists, adolescent medicine physicians, adolescent psychiatrists, psychologists, etc. – about the value and the importance of gender-affirming care,” Levine told NPR in May.

During Levine’s time as Pennsylvania Health Secretary, Pennsylvania taxpayers have paid nearly $17 million to fund sex reassignment surgery and other services for minor children — some as young as 14 — and without any legislative approval, according to the  Pennsylvania Family Institute,

“This level of state-endorsed harm upon children is reprehensible,” said PFI’s spokesperson Alexis Sneller at the time. “While we knew the Wolf administration was funding services related to these irreversible procedures on minors, now seeing the exact numbers — millions spent towards these detrimental acts — is still shocking.”

And Levine made national news when it was learned that during the peak of the COVID crisis, she moved her 95-year-old mother from a personal care home to a hotel at the same time her department was forcing care facilities to admit and re-admit coronavirus-positive patients.

“Gender-affirming medical treatment, including hormone therapy, causes irreversible fertility loss. Children and adolescents don’t have the developmental capacity or understanding to make such a weighty decision. It’s unethical and irresponsible for adults to put such a weighty choice on the shoulders of children,” said Brock, who hosts the “Parents Have the Right to Know” website.

“It’s upsetting to hear Rachel Levine speak about being thankful to have transitioned later in life, after having children, knowing Levine is working with the Biden administration to push fertility ending medical treatment on children.”