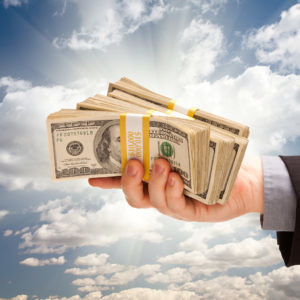 QUINLAN: No Unconditional Handouts to the States

The biggest sticking point in negotiations between the White House, Senate Republicans and House Democrats over the next COVID-19 relief bill is the treatment of the CARES Act’s recently expired $600 in added weekly unemployment benefits.

But added unemployment benefits are not the only point of contention and — in the long run — the question of financial aid to the states is likely to prove the most consequential.

The sides are far apart on the question of aid to the states. In their bill, Democrats provided $1 trillion, roughly the entire amount that Republicans proposed in new spending, just for state, local and tribal governments.

Republicans proposed no new funds for states but offered more flexibility for use of funds leftover from the $150 billion allocated in the CARES Act. A new report from the U.S. Treasury Department’s Office of Inspector General shows that only about 25 percent have yet been spent.

State and local governments are taking on considerable responsibility in the fight against COVID-19, and for good reason, as they are closest to the problem and best positioned to quickly respond as conditions change.

It is thus understandable that Congress would consider some measure of financial support to state and local governments as part of the national effort to address the virus. But how states are permitted to spend any potential relief dollars is just as important to get right as the amount of aid they end up receiving.

Long before the arrival of COVID-19, many states were in dire straits financially.

Some, like New Jersey, Illinois and Massachusetts have taken on hundreds of billions of dollars in debt to finance large governments, while others make the hard decisions that lead to responsible and balanced budgets.

Some, like Wyoming, Alaska, California and North Dakota, even planned ahead and now have sizable “rainy-day” funds they can draw upon to fill budget gaps due to declining tax revenues during the pandemic.

And whereas some states responded to expected declines in tax revenue with furloughs and other spending cuts, Illinois continued its irresponsible ways by passing a budget with $2.4 billion more in spending than the previous year.

Is it right that the most responsible states should have to shoulder the added costs of supporting those that refuse to get their fiscal houses in order? Doing so would amount to a reward for failing to act responsibly.

Employee compensation accounts for half of all state and local spending, making unfunded pension liabilities a large part of the story when it comes to state financial mismanagement.

For decades, governments have failed to fully fund the often generous pension benefits for their employees, kicking the can down the road for future taxpayers to deal with. Unfunded liabilities of state pension plans now total roughly $5 trillion, according to U.S. Pension Tracker.

This is a problem that requires significant reforms. A condition free bailout of the states that allows governments to allocate federal dollars toward closing fiscal gaps caused by excessive spending — such as through state employee pension programs — would only serve to sap the political will necessary to make reform a reality.

To avoid this problem, Congress should scrutinize state requests for aid and provide only those funds necessary to help them address COVID-related challenges.

Or if being more generous is a necessary compromise, then funds should be conditioned on the adoption of fiscally responsible reforms that put pension programs on the path to sustainability, or that encourage the use of rainy-day funds to better prepare for the next crisis.

Andrew F. Quinlan is co-founder and president of the Center for Freedom and Prosperity.