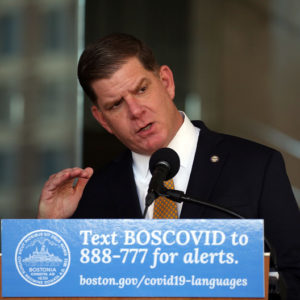 Mayor Martin Walsh provides an update on the coronavirus epidemic in the City of Boston. (Mayor’s Office Photo by John Wilcox)
[IS] Opinions

Today, politicians pushing to keep lockdown policies in place are embracing a new strategy: suppression. “We must stop the spread.”

The result of embracing two conflicting approaches to the COVID-19 crisis is on display in Boston, where Mayor Marty Walsh announced he’s holding off on lifting some restrictions on his city because the number of people who’ve been exposed to COVID-19 is too low.

When antibody tests showed less than 10 percent of the city’s population had been exposed to the virus, the Boston Democrat decided to pull back on plans to loosen restrictions, because “the majority of our population still have not been exposed to the virus. This underscores what we already know, that we have to move cautiously and stay focused on what got us this far,” Walsh said.

“There have been many dumb policy decisions during the COVID-19 pandemic, but this is one of the dumbest,” health policy expert Avik Roy told InsideSources regarding the Boston mayor’s comments. Roy, president of The Foundation for Research on Equal Opportunity, believes it’s past time for advocates of widespread lockdowns to re-think their strategy.

The lockdown approach was presented to Americans as a form of mitigation, to “flatten the curve” and keep hospitals from being overrun by COVID-19 patients. But once the curve was broken, by April 1 or so, the lockdown had done its job mitigating the disease’s impact.

But extending the lockdown beyond that point is a suppression strategy whose goal is to stop the spread entirely — and that’s raising questions among public health professionals.

“I think we’re suffering from collectively muddled thinking and, and mission creep as suppression has given way to mitigation,” says Dr. George Savage, Chief Medical Officer / Co-Founder at Proteus Digital Health, Inc.“We all remember the famous graph that was shown everywhere, with the hospital capacity and rate of hospitalizations and everyone agreed: Gosh, we don’t want that to happen. And suppression succeeded, we clearly flattened the curve.

“But with the virus still here and no chance of eradicating it in the near term, it’s time to move beyond [widespread lockdowns.] “Instead, we’re hearing strange things like ‘we can’t end the lockdowns until there’s a vaccine.’ That’s a very different approach from avoiding overwhelming the healthcare system,” Savage said.

Jared Rhoads, of the Dartmouth Institute for Health Policy and Clinical Practice, says a suppression strategy makes sense “if you have a high degree of confidence that a silver bullet, like a vaccine, is around the corner — or that you can extinguish it because you know where all the cases are. But otherwise, it is just an extremely long and drawn-out approach.”

And as World Health Organization special coronavirus envoy, Dr. David Nabarro said Tuesday, “This virus is here to stay. We don’t want anyone to believe there’s a vaccine right around the corner. This virus will be a constant threat to us.”

Just a few miles from Boston, New Hampshire’s state epidemiologist announced Monday his state is stuck in the same spot. Antibody tests show fewer than 5 percent of Granite Staters exposed to the virus. The same in Los Angeles, where testing reveals a similar level of exposure and County Public Health Director Dr. Barbara Ferrer said the city’s “Safer At Home” order would be “expanded all the way to August.”

That statement sparked so much widespread backlash the city is now reconsidering its approach.

LA’s Mayor Garcetti’s problem, like the other elected officials attempting to defend the lockdown strategy, is that there’s no clear answer to the question of how shuttering businesses today will reduce the risk of widespread COVID-19 cases in a vaccine-free future. In fact, lockdowns make the risks worse.

There is another way, says Dr. Savage. “Vertical interdiction.”

“Vertical interdiction means we segregate people by their risk. For those who are immunosuppressed or have other serious comorbidities or by virtue of being elderly are at the highest risk, we should use extraordinary measures aimed at protecting them until there’s a vaccine,” Savage said.

“Meanwhile, the rest of us, well, we can’t go back to business as usual — you probably don’t want 50,000 people in a football stadium right now. But we should allow people to sort out how to do appropriate mitigation and make the best decisions for their own business so that they can go back to keeping the economy rolling and build herd immunity.”

Rhoads makes the same point about the value of exposure to the virus among the healthiest segments of the population. “Suppression doesn’t allow you to work through cases. Further, I’d say that if your health system capacity is too idle, then you are probably too locked down — you aren’t working through the population, allowing immunity to build.”

Large-scale lockdowns inflict massive costs on society. In addition to the financial costs (Nobel Laureate economist Paul Romer puts the price tag at $500 billion a month in foregone output for the U.S. economy), there are devastating impacts on families and community institutions.

If the coronavirus surges across an unprotected population this fall, many Americans may wonder if the high price bought them too little.