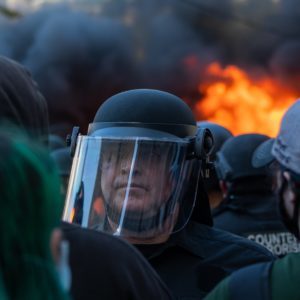 PHILADELPHIA ― The Independence Hall where 56 men signed the Declaration of Independence is a vision in red brick, its clock tower looking over a park where the Liberty Bell is now encased in glass.

It was that bell, famed for its hairline crack, that rang out the news of the 56 members of the continental congress approving the declaration on July 4, 1776.

These days, though, Independence Hall looks almost modest, dwarfed by much taller icons of modern society and barely noticed by tourists since the hall was reopened to socially distanced visitors. On a beautiful autumn day, demonstrators might prefer to protest in the center of the city at the rococo City Hall, an enormous gem of 19th century architecture.

At the pinnacle of City Hall stands a statue of William Penn, a leader of the Society of Friends, i.e. the Quakers, who had led his people to the new colony more than a century before the creation of the U.S.

A famous painting called the Peaceable Kingdom shows Penn dispensing good will to American Indians — a.k.a. Native Americans — along with assorted charming animals. Luckily, so far no one’s calling for tearing down the statue.

For one thing, it’s far out of reach of protesters who might lump Penn along with Christopher Columbus for having introduced disease and conquest to the New World.

It’s not until one gets several miles away, into crowded streets and alleys several miles from stately banks and office buildings and department stores, that one gets a sense of the violence that has rocked Philadelphia, whose name in Greek means “brotherly love.”

It was there that rioters months ago ran wild, looting shops and breaking down windows as they have done in other American cities in a summer of protest mingled with the menace of the coronavirus pandemic.

The slogan “Black Lives Matter” resonates here more than the noble words of the country’s founders while President Donald Trump battles for another chance to polish up a legacy tarnished by his misjudgment on the severity of the virus and his failure to deal effectively with political violence.

He can only pray that scientists can come up with a vaccine against the virus before the election on Nov. 3 when Americans have a chance to depose him. Still behind in the polls, he can hope that his foe Joe Biden will fail to convince enough people to get out and vote.

As if all that were not enough, the race to the finish is complicated by the death of the 87-year-old Ruth Bader Ginsburg, a tough liberal voice on the Supreme Court who once described Trump’s presidency as “an aberration” that voters would rectify in the next election.

Sadly, while she’s laid to rest six weeks before election day, the fight to replace her with a conservative woman to Trump’s liking adds yet another unexpected dimension to the campaign.

Trump is counting on a slim Republican majority in the Senate to approve his choice in time to enhance his chances of an upset victory over Biden, a pleasant, courtly figure — fine as President Barack Obama’s vice president — but an uninspiring candidate who turns 78 two-and-a half weeks after the election.

It’s almost as though the country faces a perfect storm of rampant disease and intermittent mayhem topped off by a battle royale in which Democratic Party leaders are poised to defy Trump’s choice of a justice while extremists are ready to spur on more violence if Trump wins reelection.

Looking around Independence Hall, you wonder if the country is in the midst of a cataclysm that could have as far-reaching an effect as the Declaration of Independence and the revolution from which it emerged. Well, the country did hold together during the terrible Civil War 90 years later that ended the curse of slavery, though not the prejudices and racism that linger today.

In the midst of the storm, you also wonder if the U.S. is at all ready to respond to an emergency overseas, for instance a serious North Korean threat in the form of another nuclear test or the launch of a long-range missile capable of carrying a warhead to the American mainland. These days, neither Trump nor Biden is saying much of anything about foreign affairs.

Perhaps an international crisis would be just the thing to distract from crises on the home front. Trump is so entranced by dictators, though, that you have to ask if he would have the will to stand up against any of them. Would the man who fell “in love” with Kim Jong-un be willing to fight for South Korea in a showdown?

Let us pray we’ll never have to answer that question.