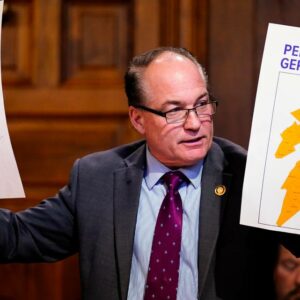 Despite a GOP majority in Harrisburg and pollsters predicting a red wave in 2022, Pennsylvania Democrats have found a way to give themselves a shot at taking the state House of Representatives next year.

They used a map. The redistricting map.

State Republicans are irate, but Democrats have drawn a map that makes their party competitive

The preliminary map the state Legislative Redistricting Commission released, if it stands, is likely to tip the balance of power in the Pennsylvania House from Republicans to Democrats.

And that has local Republicans fuming and state GOP leaders vowing that it won’t stand.

The Legislative Redistricting Commission includes party leaders for the House and Senate plus Mark Nordenberg, chancellor emeritus and chair of the Institute of Policy at the University of Pittsburgh, who is supposed to be nonpartisan.

Thomas McGarrigle, chair of the Delaware County Republicans, called the maps “unfair” and “the most partisan maps” he’s seen.

Changes to the 165th District, now held by Democrat Rep. Jennifer O’Mara, would split Marple Township in half and add more solidly Democrat Swathmore and Media into that district. Meanwhile, the 168th District, now represented by Republican Rep. Chris Quinn, would lose the mostly Republican Thornberry and add majority Democrat Radnor, decreasing the chances it would not have another Republican representative elected for a decade, McGarrigle said.

“They’re drawing the lines to make it unwinnable for a Republican,” he said. “It’s so unfair. I’m hoping for some public input and opposition from Republicans” so the map will be changed before it’s adopted.

“I am concerned about the unnecessary and unfair splitting of townships in Montgomery County,” said Havey. “The Pennsylvania Constitution is clear that townships should not be split unless absolutely necessary. Yet the new map splits townships like Horsham, which have unique township-wide issues. For example, the people of Horsham have had to deal with contaminated water issues and economic development related to the Air Force base. Splitting that township and the base in this new map is irresponsible.”

Every 10 years, after the U.S. Census, the states redraw the maps for the state legislatures and congressional seats. Pennsylvania is losing one seat in Congress because it lost population.

“The proposed state House maps are a gold mine for Pennsylvania Democrats. While 14 House Republicans have been put into the same district by the new maps, just two House Democrats have been,” said Christopher Nicholas, a veteran Republican consultant. “It’s clear the LRC has put their thumb on the scale for the Pennsylvania Democrats with this map. And it’s also odd because the proposed map for state Senate districts was fairly even-steven.”

House Majority Leader Kerry Benninghoff spoke to the Delaware Valley Journal about his objections to the proposed House map, which would change districts to “pit 14 Republican members” against each other, de facto disenfranchising voters in those districts and reducing the number of Republicans in the House. Only two Democratic House members would have the same quandary, he said, echoing Nicholas.

“Out of the gate that says something’s not right,” said Benninghoff. “To me, it’s an extremely gerrymandered map to benefit one party.”

“The constitution requires you to not split municipalities unless absolutely necessary,” said Benninghoff. “The map we submitted to the chairmen (Nordenberg) had 52 splits out of 2,600 municipalities.” The proposed map has 184 splits in counties, 102 splits of municipalities, and 98 splits for wards.

In the past the LRC chairman was a judge, he said. And judges are used to mediation so there would be give and take and a consensus reached. In this case, Nordenberg, an academic, used his own mapmaker and his own criteria, ignoring the map that Republicans submitted, Benninghoff said. Nordenberg not only ignored the various rules, including keeping “communities of interest” together but he added prisoners back into the numbers for the towns they had resided in before they were incarcerated, something not done before. And the U.S. Census counts inmates where they are imprisoned, he noted.

“Last but not least, you only have to look at the splits of cities which we try not to do. Harrisburg, Lancaster, State College, Allentown, Reading and Scranton are split significantly. Allentown is split three ways, Scranton four ways. This is done for partisan purposes,” he said.

“We recommended a new district in Cumberland and Lancaster,” said Benninghoff. “Cumberland did not get a new House seat regardless of population growth. They got a Senate seat. Something tells me it’s not a math problem. It’s a choice.”

“The plan respects communities of interest throughout the state. It also comports with the Voting Rights Act which requires that communities of color must have the same opportunity as other members of the electorate to participate in the political process and to elect representatives of their choice. And, not insignificantly, as a result of the historic vote by the commission to reallocate incarcerated individuals to their home communities, the plan eliminates the representational inequities that result when incarcerated persons are counted where they are incarcerated rather than at their homes.”

And Nordenberg, a registered Democrat who was appointed to the LRC by the Democratic majority state Supreme Court, defended his work in a recent article in The Philadelphia Inquirer.

The commission will accept public comment on the new maps until Jan. 18.