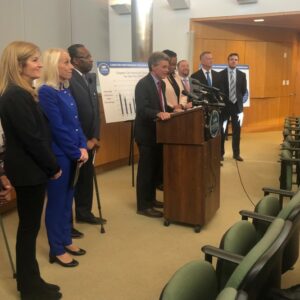 Progress Report on The Chester Parternship for Safe Neighborhoods

District Attorney Stollsteimer announced that “Over the past two years, as a result of the work of my office, the Mayor’s office, the Chester Police Department, and Delaware County Council – with unwavering support from our partners Attorney General Josh Shapiro and Congresswoman Mary Gay Scanlon – CPSN has continued to have an extraordinary impact on the level of gun violence in the City of Chester.” A few of the highlights include:

Stollsteimer stated that “the progress that has been made in reducing gun violence in Chester is making a difference every day in the lives of City residents – and we would not have achieved these results without the support of all of our partners. We are particularly grateful to General Shapiro and Congresswoman Scanlon for their support of our efforts to obtain a $2 million grant from the Pennsylvania Commission on Crime and Delinquency to continue and to expand the work of CPSN.”

“The Chester Partnership for Safe Neighborhoods is an example of the positive impact that a focused, intelligence-based enforcement approach can have on a community. I commend the great work being done by District Attorney Jack Stollsteimer and the people of Delaware County to reduce the gunviolence that puts our neighborhoods and public safety at risk. There is still more work to be done, and together, through programs like this, we will make our communities safer for all who live there,” said Attorney General Josh Shapiro.

“Everyone deserves to live in a safe community,” said Scanlon. “I’ve worked hard in Congress to deliver the resources critical to making community safety a reality. I’m proud to work with District Attorney Stollsteimer and the Chester Partnership for Safe Neighborhoods to bring evidence-based solutions to prevent crime and help restore safety in our neighborhoods. While many offer nothing but meaningless rhetoric about being tough on crime, the DA’s office and the Chester Partnership for Safe Neighborhoods are doing the actual hard work of keeping guns out of the hands of those who shouldn’t have them and addressing the root causes of violence by connecting individuals to opportunities such as meaningful employment, educational programs, and appropriate mental health care.”

In October of 2020 Stollsteimer launched CPSN, which is a deterrence-based program aimed at reducing gun violence premised on a data-driven model developed by Swarthmore College alum David Kennedy. The program, similar to ones implemented years ago in Boston and Philadelphia, works on a “carrot and stick” approach that begins by calling in influential people involved in crime, explaining that law enforcement knows who they are what they are responsible for, and giving them the ultimatum: “If you let us, we will help you; if you make us, we will stop you.”

The help may come in ways big and small, from simply getting a suspended license reinstated, or a present for someone’s daughter while they are in prison, to getting an offender into an educational or vocational program so they can improve their lot in life legally. With the financial support obtained through PCCD, additional staff will be hired to work with program participants. With the support of County Council, a community resource specialist was hired in 2020, and he continues to work on the streets of Chester every day connecting at-risk individuals with needed services. With funding from PCCD, three additional community resource specialists will be hired, and recently the Green Family Foundation has added its support to CPSN by contributing the funding needed to pay the salary of one of the outreach workers.

Kirkland said, “The Chester Partnership for Safe Neighborhoods is a truly collaborative effort bringing public agencies, law enforcement, and community groups in our City together behind the shared goals of improving the public safety and quality of life for Chester residents. I am appreciative of all of our partners who encourage and support this life-saving work.”

“Delaware County Council is committed to the public safety concerns of our community and we are committed to ensuring that every resident in every neighborhood feels safe and protected,” said Delaware County Council Chair Monica Taylor, Ph.D. “Today’s announcement demonstrates what can be achieved through genuine collaboration, and on behalf of County government, I’d like to commend those who are a part of the Chester Partnership for Safe Neighborhoods program and who have worked to reduce homicides and gun violence in the City of Chester.”