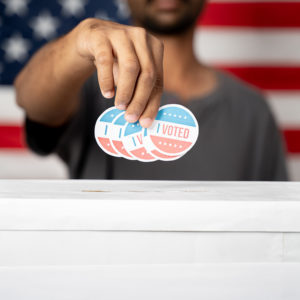 Close up of Hands dropping multiple I Voted sticker inside Ballot box with US flag as background, Concept of fraud in USA elections
[IS] Opinions

Votes were still being cast in the 2020 presidential election when accusations of voter fraud began making the rounds.

As the legal wrangling drags on, many Americans long for a return to the good old days of easily settled elections without the taint of political shenanigans.

Only one problem: Election fraud was far more prevalent in America’s past than it is today. Consider these worst of the worst examples.

A classic case of rampant voter fraud was Kansas’ territorial election of 1855. The nation maintained a precarious balancing act of free and slave states in the antebellum era, with each faction looking for ways to gain an edge.

Streams of Northern settlers flooded the territory to give the “Free Staters” an electoral advantage. That alarmed pro-slavery “Border Ruffians” across the state line in Missouri, who overran the polls in the March 30 legislative election.

The results were so lopsided the territorial governor voided them and scheduled a special vote on May 22, which produced more Free State legislators. When the new Legislature met on July 2, however, the first thing it did was rescind May’s election and seat those originally elected in March. Things quickly deteriorated into a deadly quagmire known of “Bleeding Kansas” until the Civil War eventually settled matters.

Indiana may be seen by some as a symbol of Midwestern virtue.

But in the 1888 Republican presidential election, it was home to a famous vote fraud scandal. The Hoosier State was also the home of Republican nominee Benjamin Harrison. In order to oust incumbent Democrat Grover Cleveland from the White House, the GOP needed to carry both Indiana and New York. Party bosses weren’t worried about the Empire State because they had plenty of cash to spread around there.

Indiana was a different matter. Carrying it involved using “floaters,” unscrupulous voters who floated from one precinct to another on election day, and “repeaters,” those who voted multiple times throughout the day at the same polling place. They were even provided paper ballots to take with them.

There was just one problem, and it was a biggie: The Republican National Committee’s treasurer spelled out how the scheme should work in a detailed memo to Indiana’s party county chairmen. Its juicier tidbits included, “Divide the floaters into blocks of five and put a trusted man with the necessary funds in charge …”

Democrats got a copy of the letter and circulated thousands of copies in the campaign’s closing days. Harrison lost the popular vote but won the Electoral College. (Sound familiar?) And he carried Indiana.

Perhaps one of the most notorious cases of vote fraud happened in Texas’ 1948 U.S. Senate primary runoff.

Congressman Lyndon Johnson was locked in a political life-or-death struggle with popular former Gov. Coke Stevenson. In those days, winning the Democratic primary in Texas was tantamount to winning the general election, so it was a very big deal.

When the ballots were counted, Stevenson was ahead by a handful of votes out of 988,295 cast.

But six days later, Ballot Box 13 suspiciously appeared in the dusty little town of Alice, filled with 200 fresh votes that hadn’t been tabulated.

Of particular interest was the fact that the names of all 200 voters were added at the very bottom of the voter registry — all written in alphabetical order in the same ink and penned with the same handwriting.

Johnson was eventually declared the winner by 87 votes, a margin so microscopic he introduced himself to his new Senate colleagues with, “Howdy, I’m Landslide Lyndon.”

You could say that voter shenanigans are as American as hot apple pie — or perhaps cold beer. In 1755, George Washington received just 40 votes in his first bid for the Virginia House of Burgesses after his opponent plied the electorate with beer, whiskey and wine.

Washington, a political novice but a quick study, ran three years later on a platform powered by 28 gallons of rum, 50 gallons of rum punch, 34 gallons of wine, 46 gallons of beer and two gallons of cider. He won handily with 331 votes — or one vote for every quart and a half of liquor.

By the time the 2020 election cycle is finally over, all of America may need a drink.